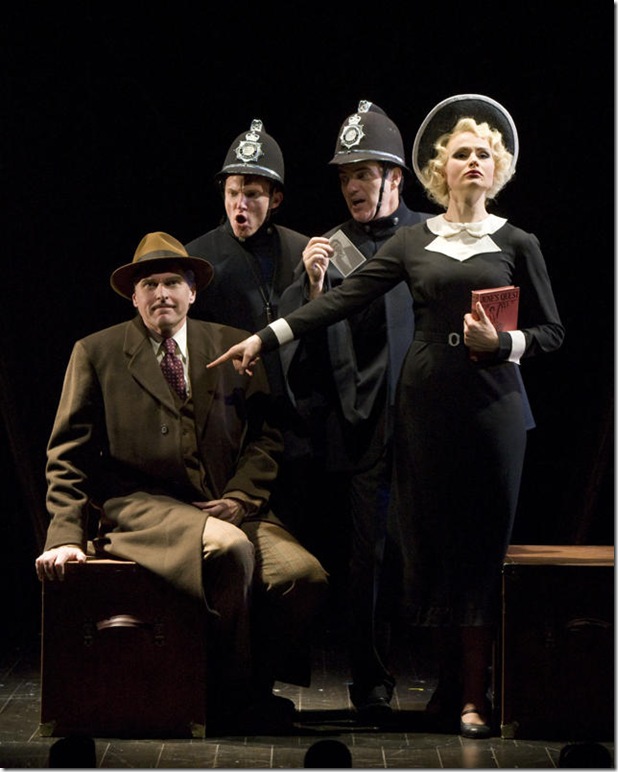 So many shows on Broadway these days stem from movies, productions that get slapped onstage, bypassing any new injection of imagination.

And then there is Alfred Hitchcock’s The 39 Steps, a frantic, frisky adaptation of a 1935 spy thriller from the master of suspense, reduced — or possibly elevated — to a sly comic romp by four actors sprinting through the film’s plot, pausing for plenty of tongue-in-cheek humor, and impersonating the scores of characters in this stiff-upper-lip tense tale.

Having already had a healthy run on Broadway, The 39 Steps is currently on hiatus there before returning for a further run off-Broadway. Meanwhile, the show is on tour, spreading its infectious silliness across the country, including Fort Lauderdale’s Parker Playhouse, where is plays through Feb. 28.

Picture a cut-rate theater company that cannot afford the payroll this convoluted yarn would normally require. Nor do they seem to have the means to construct the sets that the film’s numerous locations would require.

So the parts are dealt out among the four members of the troupe, particularly Eric Hissom and Scott Parkinson, the two hardest-working actors around, who switch costumes and characters with abandon, while occasionally lugging onstage a stray piece of furniture or scenic element.

Under Maria Aitken’s direction, The 39 Steps thumbs its nose at the commercial theater’s penchant for spectacle, preferring instead to draw on the audience’s imagination with shadow puppets and atmospheric lighting. With those puppets, for instance, the Loch Ness monster can materialize and Hitchcock himself can make his signature cameo appearance. (At the 2008 Tony Awards, the show won for outstanding lighting and sound.)

The plot concerns one of Hitchcock’s iconic innocents on the run, a mustachioed Canadian named Richard Hannay (Ted Deasy), who becomes implicated in a murder and forced to flee across the United Kingdom, chased by the police and by espionage agents.

Along the way, he encounters a succession of women — a Germanic Mata Hari, an archetypal alluring Hitchcock blonde and a rural farm girl — all played by the versatile Claire Brownell.

Do not be concerned if you are unfamiliar with the film of The 39 Steps, for plot is not this show’s strong point and there is plenty of fun to be had enjoying the moment-to-moment jokes. At just under two hours, the comic conceit is probably stretched to its limit, but the performers are so deft that they hold our attention beyond the point of diminishing returns.

The central joke is that a movie like The 39 Steps cannot possibly be replicated live and contained on a stage. Fortunately, no one told adaptor Patrick Barlow or these four nimble, puckish actors.

Film: Playwright August Wilson began his chronicle of the African-American experience throughout the … END_OF_DOCUMENT_TOKEN_TO_BE_REPLACED

Film: Just in time with the opening of movie theaters in Palm Beach County comes the season’s most … END_OF_DOCUMENT_TOKEN_TO_BE_REPLACED

Music: The very last concert Franz Joseph Haydn attended in his life was in March 1808, about a year … END_OF_DOCUMENT_TOKEN_TO_BE_REPLACED