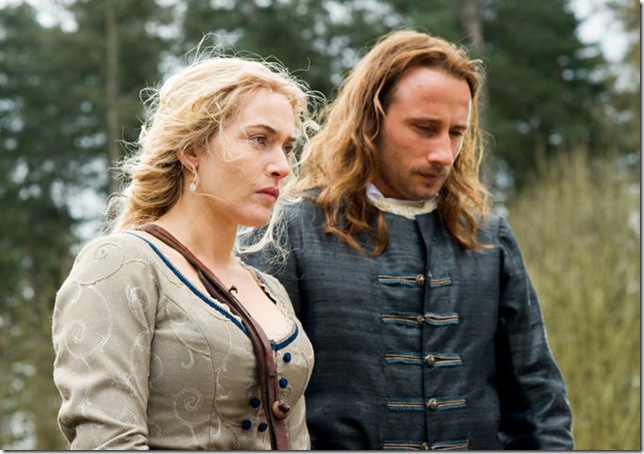 So far, Alan Rickman’s A Little Chaos is the year’s best candidate for Most Misleading Movie Title. Would that even a little chaos infringe on this calcified costume romance about nothing much more than the design of a water cascade and outdoor ballroom in the Gardens of Versailles in 17th-century France. This movie is what happens when the irrepressible thrills of modernist landscaping write themselves.

Nominally, the title has to do with opposing architectural visions, those of the conservative traditionalist André le Nôtre (Matthias Schoenaerts), the king’s chief Versailles gardener; and his soon-to-be-hire, Sabine De Barra (Kate Winslet), a lower-caste rebel whose design for the Gardens’ ballroom contains, per André, “no trace of order.” The inverse of that order is, of course, chaos, which Sabine apparently expresses by her rash act of slightly adjusting the placement of a palace shrub on the way to her job interview. I suppose for a gilded age, that’s disruption, but Sabine hardly comes across as the Frank Gehry of her time.

At any rate, she’s the least likely candidate and the only woman to apply for the job, which means she’ll obviously get it, especially considering her disastrous first impression on André — a Romance Writing 101 encounter that cements their future copulation. Schoenaerts, fresh off the superior Far From the Madding Crowd, again sets his gaze on a woman who knows how to get her hands dirty, though in this picture he’s more of a token paperback-cover hunk than a three-dimensional character with passions and desires. Under Rickman’s direction, he’s too modernly handsome, the only major character to forgo stuffy period periwigs in favor of his naturally leonine locks of love. He’s a pretty face with a stoner’s gaze and nothing underneath it.

Winslet, too, is similarly hampered by a script that is as inert as the wood and stone that comprises her arduous architectural vision. Her Sabine is a proto-feminist merely by incident, not revolutionary fervor. She is likewise bleached of distinction, sans a traumatic back story that occasionally resurfaces in fragmented flashbacks —teases for a climactic reveal about which we care little.

The film’s few charms lie around its periphery. Stanley Tucci briefly lifts its pulse as Duke Philippe d’Orléans, a flamboyant and well-coiffed wag who seems to possess an innate knowledge of human behavior that the rest of the cast’s dressed-up mannequins do not. Allison Deegan’s script, for all its missed opportunities, at least manages to exposes the sexual deviance of the privileged class, with their requisite mistresses and compulsory polyamory. And to its credit, there is one terribly touching and strange scene that almost lives up to the chaotic title, in which Sabine is introduced to a quasi-secret society of women left widowed and childless by the famines, wars and other sicknesses of the day.

But clichéd grammar, both in its dialogue and its formal qualities, preside over the soporific whole of A Little Chaos. Rickman, perhaps blinded by myopia, fails to see that what should be a central scene, in which his character, King Louis XIV, meets Sabine by chance in a meditation garden following his wife’s death, stops the film in its leaden tracks. What little spark it retains is extinguished in their next meeting, an embarrassing exchange of facile metaphors, clothed in the frippery of profundity.

We’re ultimately reminded that just because the gardens of Versailles are a jaw-dropping achievement in human creativity and nature’s splendor, that doesn’t mean there’s a movie there.

Film: Playwright August Wilson began his chronicle of the African-American experience throughout the … END_OF_DOCUMENT_TOKEN_TO_BE_REPLACED

Film: Just in time with the opening of movie theaters in Palm Beach County comes the season’s most … END_OF_DOCUMENT_TOKEN_TO_BE_REPLACED

Music: The very last concert Franz Joseph Haydn attended in his life was in March 1808, about a year … END_OF_DOCUMENT_TOKEN_TO_BE_REPLACED