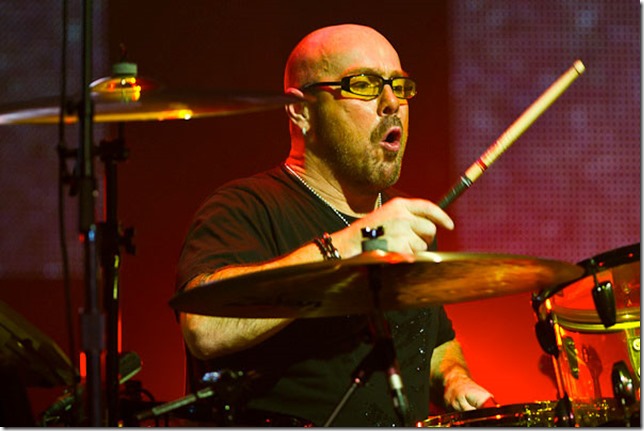 It seemed inevitable that drummer Jason Bonham would eventually put together an act paying tribute to Led Zeppelin, the band of his late father, drummer John Bonham.

The primary reason that Jason Bonham’s Led Zeppelin Experience didn’t launch until 2010 — a full 30 years after the senior Bonham’s death — was that the younger Bonham was the logical replacement for his dad during most of the surviving Zeppelin members’ infrequent reunions, the latest documented in that band’s 2007 concert film Celebration Day (released in 2012).

Led Zeppelin was arguably the most versatile band in rock history, flexibly dipping ahead-of-its-time toes into odd-metered time signatures and genres ranging from metal to folk, funk to fusion for a decade beginning in the late 1960s. And Zep’s popularity was evident Wednesday night as Bonham’s tribute group played a sold-out show at the Hard Rock Live in Hollywood.

Bonham was only 13 years old when he lost his father, and he used a backdrop screen and his own narration to introduce the show with footage of his dad as a child in England in the 1950s. Then his quintet, with lead vocalist/guitarist James Dylan, guitarist/vocalist Tony Catania, bassist/mandolinist Dorian Heartsong, and keyboardist/guitarist Alex Howland, found its footing on the often-roaring Zeppelin opener “Rock and Roll,” which featured an impressive solo by Catania.

The raucous “Wearing and Tearing,” a track that was recorded for Zep’s 1979 LP In Through the Out Door, yet wasn’t released until the posthumous 1982 outtakes collection Coda, might also have been better off saved until the group had warmed up to such challenging tempos.

“Good Times Bad Times,” the opening track on Zeppelin’s 1969 debut, got the band on track and started a strong midsection to the 2½-hour performance. Catania’s solo was another successful take on one of Jimmy Page’s classic breaks, and Bonham’s strutting mid-tempo cadence was spot-on. The drummer, who’s led his own band since the 1980s and recorded and toured with Foreigner, UFO, Page, and Sammy Hagar, may lack his father’s inimitable power, flexibility and creativity, but his genes and talent often allow him to mimic as well as anyone has for the past 45 years (and countless drummers have tried).

“This is an annual event, as we seem to be coming back here each year,” said Bonham (now a South Florida resident) to a roar of approval from the crowd. “This is the last show of the tour, and usually you get the first. It wasn’t like my father was in The Beatles, but he was just a better drummer than they had, in my opinion. And I thank him for teaching me how to play!”

The 49-year-old drummer proved he’d learned his lessons during the subsequent “Over the Hills and Far Away.” The versatile Howland, a catalyst in gluing together the various parts of Page and Zeppelin bassist/keyboardist John Paul Jones, switched from keyboards to acoustic guitar for an intro duet with Catania. Dylan, as he did throughout the show, captured Robert Plant’s vocal phrasing if not his flair, and Catania proved that each song hinged primarily on his performance. On this one, his expert mimicry was nonetheless overshadowed by excessive volume.

A funky “The Wanton Song,” one of the lesser-heralded gems from the 1975 double-album Physical Graffiti, glided on Catania’s chords and Howland’s keyboards before the latter switched to electric guitar to cover some of Page’s overdubbed parts on “What is and What Should Never Be,” from Led Zeppelin II. Catania’s sloppy slide solo, however, brought the otherwise mesmerizing piece down a notch.

Another track from Zep’s banner sophomore effort, the ballad “Thank You,” fared better. Dylan added acoustic guitar; Howland played textural keys, and Catania’s backing vocals in the song’s bridge were accurate and true — all augmented by video footage of Bonham’s father playing down by the seaside as a child with his brother and parents.

Catania again proved the warhead on the slow blues classic “Since I’ve Been Loving You,” doing justice to one of Page’s signature solos, yet botching some of the subsequent chords, before Bonham took the spotlight. On his dad’s classic drum showcase “Moby Dick,” he capably put his own spin on the unaccompanied section that followed the opening riff with Catania and Heartsong. The drummer’s creative use of an orchestral tympani, complete with muting techniques and the changing of tones with its foot pedal, led to an onscreen drum duet with his dad, as both played the exact same parts of the drum solo before the guitarist and bassist re-entered for the finale.

Heartsong also proved versatile by playing Jones’ mandolin parts on the ballad “Going To California,” Page and Plant’s ode to the folk style of Joni Mitchell, which appeared on 1971’s Led Zeppelin IV. Catania then used a double-neck guitar, and Howland nailed Jones’ acidic mellotron keyboard sounds on an ace rendition of the gorgeous “The Rain Song,” from the 1973 gem Houses of the Holy, and Bonham navigated both the odd time signatures and backing vocals on “The Ocean,” the closing track from the same LP.

“When the Levee Breaks” was aided by a sample of the elder Bonham’s titanic pattern and drum tones, as well as guest harmonica player Gary Hood, before the proceedings went up-and-down again. The bandleader’s drum intro to “Fool in the Rain,” the obligatory cut from the sub-par In Through the Out Door, couldn’t overcome Catania’s shortcomings, which included absurd volume and awful tone during his solo.

The funky “Trampled Underfoot,” on which Jones’ clavinet parts were inspired by Stevie Wonder’s “Superstition,” proved a highlight by finally putting the spotlight on Howland, who made every note count during his keyboard break. Epic album cuts then closed the show, starting with the Middle Eastern-influenced “Kashmir.” Catania quoted Page’s “Black Mountain Side” during the intro, yet some of Plant’s high notes proved too much of a challenge for Dylan’s tiring voice.

The guitarist made use of the double-neck electric guitar again on “Stairway to Heaven,” after playing the opening notes on an acoustic instrument mounted on a stand, and the vocalist let the audience sing many of the now etched-in-memory lyrics. For an encore, the quintet delivered an inspired version of “Whole Lotta Love,” complete with Howland donning a second electric guitar to play Page’s slide patterns and Catania waving his hands around a theremin to elicit crazed electronic tones suitable for the song’s barely controlled middle section.

The crowd, consisting mainly of baby boomers, left satisfied. For anyone who had tickets to see Led Zeppelin’s 1975 concert at Moroso Speedway (subsequently canceled when sales quickly overwhelmed the too-small venue) or suffered through the wonder and agony of the band’s 1977 appearance at Tampa Stadium, canceled after four songs by a downpour of rain and an ensuing riot, this was likely as close as they’d get to the original version.

With tribute acts now all the rage in general, and Zeppelin tributes particularly becoming popular, Bonham’s genes certainly give him more than a leg up in the legitimacy pool. And as he proved a month before his 50th birthday, he also has the supporting cast to pull it off.

Film: Playwright August Wilson began his chronicle of the African-American experience throughout the … END_OF_DOCUMENT_TOKEN_TO_BE_REPLACED

Film: Just in time with the opening of movie theaters in Palm Beach County comes the season’s most … END_OF_DOCUMENT_TOKEN_TO_BE_REPLACED

Music: The very last concert Franz Joseph Haydn attended in his life was in March 1808, about a year … END_OF_DOCUMENT_TOKEN_TO_BE_REPLACED