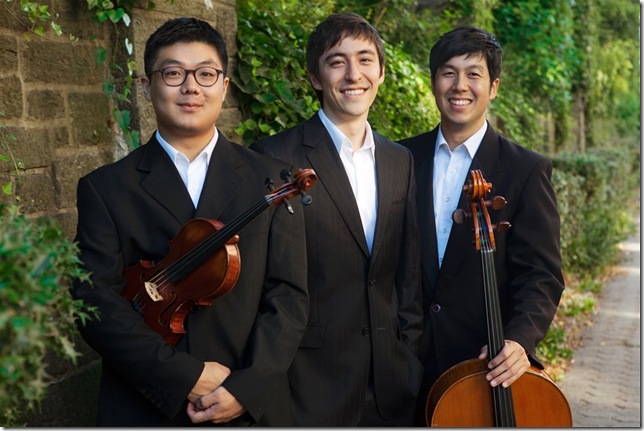 Brilliance comes in threes, it appears.

Tuesday night at Mar-a-Lago, in the second concert of the Chamber Music Society of Palm Beach, three young men — Doori Na, violin; Joseph Lee, cello; and Sean Kennard, piano — thrilled the many concert attendees with their music-making. And indeed, their musicianship was remarkable.

Coming together as individuals of astonishing skill with educations from the Julliard, Curtis and Mannes schools of music, they exemplified what is best about this new breed of student virtuoso in America; they are world-class already, or pretty near it.

Na and Lee already have won positions with busy orchestras. And Kennard has a win list the envy of the best pianists around, with nine top prizes from Belgium to Japan. He plays exceptionally well; his rendition of Vladimir Horowitz’s transcription of Saint-Saëns Danse Macabre on Tuesday night was a showstopper, winning an immediate standing ovation.

But it’s possible these three young men can fill the current shortage in piano trios, the great Beaux Arts Trio having retired. Na, Lee and Kennard began with a rapturous interpretation of Ravel’s Piano Trio.

The work starts with a heavenly piano opening. A muted violin joins in followed by a salubrious cello accompaniment as all three move toward a typically warm Ravel crescendo. More buildups from low starts as the music moves to smoother pastures on the violin. The piano bridges to a long drawn-out passage on the cello, then eases its way out as the cello ends the movement with a plucked chord.

Energetic violin and cello begin the second movement; very busily they pass the tune to the piano. More clever scales and two or three Ravel crescendos build, which the violin carries over to the other two players. Each instrumentalist races up the scales to a magnificent climax.

Heavy bass notes on the piano move the Passacaille along slowly until picked up by the cello. Now a violin solo takes over with a pensive melody passed to the piano, then the cello. All three join as one until the piano strums out lurking chords of doom. This movement is marked Très large, and big it was from these wonderful Ravel enthusiasts.

The animated last movement has rushing piano arpeggios, massive scales and cheeky interjections. The mood is lively, and some beautiful Ravel dissonances make the continual climaxes memorable. The music continues with astonishing key changes until it comes to an end. It was brilliantly played, and well deserving of a standing ovation.

In addition to Kennard’s Saint-Saens, Na and Lee were heard in duet in the well-known virtuoso tour de force Johan Halvorsen made out of a Passacaglia by Handel.

Mendelssohn’s Piano Trio No. 1 (in D minor, Op. 49) ended the program. The Mendelssohn is a virtuosic piece, and the three men played it with heartfelt passion, making wonderful music together. It, too, was met with a standing ovation.

In these Chamber Music Society programs there are no intermissions, and they last but  one-and-a quarter hours or thereabouts, leaving the audience wanting more as they wend their way out of Mar-a-Lago to a home-cooked dinner or a well-prepared meal at one of Palm Beach’s fine restaurants, since the night is young after a 7 p.m. start.

One quibble: While these young men may have performing skills bestowed on them by St. Cecilia, they have poor diction when it comes to announcing what they are playing. A few elocution lessons in how to project the voice to the back of the room might prove a distinct advantage if they are to win new fans and develop a major following. This also applies to so many dedicated, gifted young artists exiting our music schools who seem to have neglected this facet of concertizing.

The next concert in the Great Performers series is set for Jan. 21 at Mar-a-Lago. Oboists Matthew Dine and Stephen Taylor will be joined by harpsichordist Paolo Bordignon for music by Albinoni, Bach, Mozart and Berlioz. The concert begins at 6 p.m. Tickets are $125, which includes cocktail reception. Call 561-379-6773 or visit www.cmspb.org.

Film: Playwright August Wilson began his chronicle of the African-American experience throughout the … END_OF_DOCUMENT_TOKEN_TO_BE_REPLACED

Film: Just in time with the opening of movie theaters in Palm Beach County comes the season’s most … END_OF_DOCUMENT_TOKEN_TO_BE_REPLACED

Music: The very last concert Franz Joseph Haydn attended in his life was in March 1808, about a year … END_OF_DOCUMENT_TOKEN_TO_BE_REPLACED