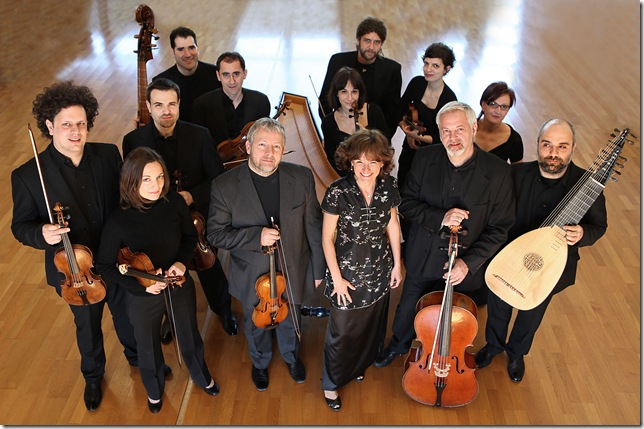 The craze for the “early music” of the 17th and 18th centuries began with Arnold Dolmetsch in 1925. He was a recorder maker who started the Haslemere Early Music Festival in England, laying the foundation for the widespread interest that caught the public imagination.

In America, recorder player Bernard Krainis linked up with musicologist Noah Greenberg to form New York Pro Musica Antiqua in 1952 , the first U.S. group to fix on Renaissance and medieval music. Now there are any number of orchestras using early instruments, or models of them, capturing the sounds of yesteryear.

One such group, Europa Galante, from Italy, with 11 players, came to the Society of the Four Arts on Feb. 12. Founded by lead violinist Fabio Biondi in 1990, they gave only one work, Vivaldi’s Four Seasons. It was one of the earliest examples of “program music,” meaning that it had descriptive qualities that imitated life and nature: wind sounds, storms, bird calls and so on. It is based on four poems by Vivaldi, known as the Red Priest for his hair and original vocation, and an accomplished violinist who was lucky enough to have as a first appointment the job of educating young girls in a Venetian orphanage where music was held in high esteem.

Supporters of the Palm Beach Symphony heard The Four Seasons in January. It was a version that lasted all of 40 minutes. Europa Galante’s performance lasted about 1 hour and 40 minutes, and the difference between the two was striking, like day and night.

When Europa Galante performs, all the musicians stand except the cellist and theorbo player. The 11 musicians began Spring, the first of the four Seasons concerti, as a deliberately slow speed, with a sound of great delicacy, almost fragility. The solo violin, Fabio Biondi, conducts and plays, his back to the audience, but turns to face them for his solos, an arresting technique.

There was some beautiful flute playing next in Vivaldi’s flute concerto Il Gardellino (The Goldfinch, RV 428), by Marcello Gatti, who produced such a haunting sound, with brilliant runs and scales. His sound is almost ethereal, as if gifted by the god Pan. A deliberate rallentando — and pause — gives way to music of the birds from the violin. Biondi holds his bow well down the shaft to effect faster reaction in order to perfect his “bird sounds,” which are quite recognizable.

Summer, the next concerto of the Four Seasons, takes off at a brilliant pace with fast solos from the violin. More bird songs, but this time Biondi looked up to see the imaginary ones he was imitating : a nice human touch. Some excellent ensemble playing was heard here as the flute opened the pastorale section, gently accompanied by the theorbo of Giangiacomo Pinardi. Refined playing was the lovely result.

A jig introduces the oboe and bassoon again as soloists and strings join in. It was delightful to see the orchestra members bobbing up and down to the beat of the music. Long bass notes on the bassoon anchor the rest, and the famous storm music takes over. The contrast between solo violin and orchestra was remarkable.

Autumn showed how the light and shade of Europa Galante’s ensemble playing was so effective. Biondi got into a few difficulties in his first solo, but this very familiar music was deliciously rendered. Next came the flute concerto Il Notte (Night, RV 439). Quiet flute music accompanied by harpsichordist Paola Poncet leds to a few phrases from the full orchestra. The flute continues with trills and runs galore, quick crescendos from the orchestra lead to a two-note ending from the solo flute.

Last came Winter. Superb and exciting playing was heard from the orchestra in the “storm at sea” part. It is so easy to be caught up in the magic of their interpretation of this all-too-hackneyed familiar music, but Europa Galante breathed fresh life into its notes. Out of nowhere, a solo violin appeared as it led the lovely Largo to an accompaniment by plucked strings. Soloist Biondi touchingly and gently stroked the music from his strings. Back to the tempest afterward, with lots of difficult violin solos interspersed with orchestral vigor to end this familiar music.

A reduced audience gave them warm applause, half of them having left at intermission. Audience attendance for early music can vary from state to state, all depending on the level of public education. A Northeastern audience would sell out such a concert, thanks to groups such as Boston Baroque, which has blazed a trail for many years now. With Vivaldi’s 200 violin concertos, 37 for bassoon, 27 for cello, 20 for oboe, and 12 for flute, Europa Galante and new audiences have unplayed treasures yet to be heard.

Film: Playwright August Wilson began his chronicle of the African-American experience throughout the … END_OF_DOCUMENT_TOKEN_TO_BE_REPLACED

Film: Just in time with the opening of movie theaters in Palm Beach County comes the season’s most … END_OF_DOCUMENT_TOKEN_TO_BE_REPLACED

Music: The very last concert Franz Joseph Haydn attended in his life was in March 1808, about a year … END_OF_DOCUMENT_TOKEN_TO_BE_REPLACED