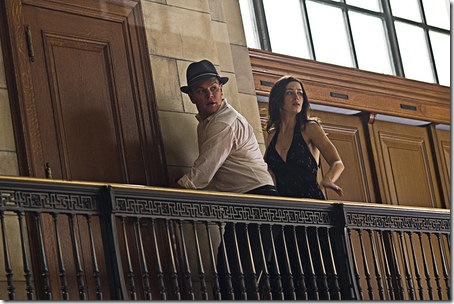 If most of Philip K. Dick’s writing was ahead of its time, the latest movie adaptation of his work, The Adjustment Bureau, is behind it.

It isn’t just that writer-director George Nolfi (who penned The Bourne Ultimatum and Ocean’s Twelve) has adapted a story for dads into a movie for moms; it’s that he’s modified Dick’s dystopic work into something corny and comfortingly theistic, without so much as a hint of lingering cynicism. If you didn’t know better, you’d think the source material came from Harlequin’s science-fiction imprint.

The Adjustment Bureau opens promisingly, though, even for Dick’s fans.

Nolfi expands the political awareness of Dick’s story by changing the author’s real estate agent protagonist into an aspiring New York Senate candidate named David Norris (Matt Damon). Norris’ party affiliation is never given, but judging by the luminaries he hobnobs with – Madeline Albright, Jesse Jackson, Mike Bloomberg and others appear as themselves – we can assume he’s a good Democrat. This is pretty much confirmed when, shortly before Election Day, Rupert Murdoch’s New York Post publishes a smear piece about Norris’ rough-and-tumble past, causing him to drop a double-digit lead and crater toward an electoral defeat.

In the men’s bathroom of the convention center where he will give his concession address, Norris meets cute with a sassy hottie named Elise (Emily Blunt), who inspires him to abandon his canned, platitude-heavy speech and speak truthfully about the phony engineering required to be succeed in politics, right down to the proper amount of scuff on one’s dress shoes. Nolfi’s writing sparkles in this cerebral set-up, opening the doors for a biting satire on the politician as corporate puppet – a slave to machinations beyond his control.

The latter is, in fact, a major theme from Dick’s story: We are slaves, though we don’t know it. Free will is a myth. We’re really being controlled by a team of dapper men acting behind the scenes, with godlike powers, to ensure that everything goes according to their blueprints for the future. The main character, in this case Norris, creates ripples in the plan by seeing behind the invisible curtain and communicating directly with these mysterious controllers of fate.

Nolfi switches things up by making Norris’ quest to be reunited with Elise the crux of the drama (in Dick’s story, the protagonist is already married, and love is not an issue), and, in the process, the potential for a dynamite political satire is discarded. When one of the Adjustment Bureau members falls asleep on the job, Norris winds up meeting Elise a second time and scoring her digits – a grave deviation from the Plan. Norris spends the rest of the picture trying to find Elise, over a period of months and even years, assisted only by a disillusioned Adjustment Bureau agent who has gone rogue (played by Anthony Mackie).

There are shades of recent science-fiction films throughout. The idea of a man realizing he’s in a controlled environment by stealing a romance resembles The Truman Show, while the overarching theme of love thwarting all scientific gimmickry conjures Eternal Sunshine of the Spotless Mind. And the thought that your mind is being shepherded by a bunch of men existing in some metaphysical nether region triggers Inception.

But compared, at least, to Christopher Nolan’s overrated, overplotted, overcooked mind-boggler, The Adjustment Bureau is a breezy walk in the park, and ultimately a hell of a lot more enjoyable. Damon and Blunt have satisfying chemistry, and Nolfi regularly provides them with interesting things to say. It’s an example of entertaining fluff, a guilty pleasure carried by an old-fashioned, buoyant tone.

But those looking for a faithful Dick adaptation a la A Scanner Darkly would do best to skip this one.

Film: Playwright August Wilson began his chronicle of the African-American experience throughout the … END_OF_DOCUMENT_TOKEN_TO_BE_REPLACED

Film: Just in time with the opening of movie theaters in Palm Beach County comes the season’s most … END_OF_DOCUMENT_TOKEN_TO_BE_REPLACED

Music: The very last concert Franz Joseph Haydn attended in his life was in March 1808, about a year … END_OF_DOCUMENT_TOKEN_TO_BE_REPLACED