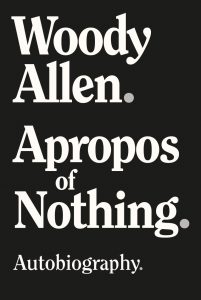 It seems unlikely that the employees of Hachette Book Group that walked out in protest of that company’s effort to publish Woody Allen’s new memoir, Apropos of Nothing, actually read the manuscript before taking umbrage that the firm would be associated with such an innocuous, albeit entertaining, tome.

Cries of censorship could be heard beyond the insular publishing world when Hachette abruptly halted its association with Allen’s autobiography/defense against long-since litigated and exonerated accusations of child molestation. In any event, Arcade Publishing, an imprint of Skyhorse, quickly picked up the option and has released Apropos, though whether as a First Amendment rights crusade or a genuine effort to turn a profit remains unclear.

If their motive was the latter, perhaps they too had not read the book, for Allen details in his off-handed, stream-of-consciousness, apropos-of-nothing way how many movie distributors have been involved with his near annual film output, only to learn how small his fan base really is. Still – if like myself – you consider yourself to be among his cult following, there is plenty in these pages to find alternately fascinating and disappointing, just like so many of his movies.

It begins with a breezy, joke-laden look – “examination” would be too strong a word – at his middle-class Brooklyn childhood. Allen recalls his hatred of school, his surprisingly athletic youth, his obsessive pursuit of magic as an avocation, the long hours spent in the local movie theater, his eventual discovery of that wonderland known as Manhattan and his frustrating pursuit of a love life or “as one might have called it, Theater of the Absurd.”

I usually skim over a subject’s early years in a memoir, eager to get to little-known details of his or her adult accomplishments that are the reason for the book’s existence. But that would be a mistake in Apropos of Nothing, for the section on the early days of young Allan Stewart Konigsberg absolutely reads like his stand-up routines, while his later discussion of his films is frustratingly shallow.

Granted that he concedes he has no interest in analyzing his movie output or in looking back on any of them once they are wrapped and in the can. Still, he takes the advice of one of his idols, Brooklyn Dodgers pitcher Satchel Paige (“Don’t look back. Something may be gaining on you”), way too seriously.

But why else would he write a memoir – except for his lengthy and repetitive account of his long-time girlfriend Mia Farrow, her efforts to turn her children against Allen and, most importantly, to pursue various legal actions against him, accusing him of sexually molesting her 7-year-old daughter, Dylan?

About 200 pages in, Apropos of Nothing takes an abrupt, darker tone as Allen relitigates the accusations against him, investigated by the Child Sexual Abuse Clinic at Yale-New Haven Hospital and New York State Child Welfare. Both investigations cleared Allen of any wrongdoing, the charges being “a total fabrication from start to finish,” in his words.

But with another of Farrow’s children, Ronan (né Satchel, fatherhood in doubt between Allen and Frank Sinatra) continuing the accusations in the court of public opinion and pressing the point that led to the Hachette manuscript dump, Allen has suffered a contract dispute with Amazon, the producer of his latest film – A Rainy Day in New York – which has kept it from being released in the United States.

Various stars of his films have denounced him in a media pile-on, though according to Allen, in the case of Timothée Chalamet, he was advised to do so to help his chances of winning an Oscar for Call Me by Your Name. And deepest wound of all, Allen and his wife Soon-Yi tried to donate to Hillary Clinton’s presidential campaign, but she refused to accept the check.

The book is dedicated to Soon-Yi, yet even there Allen cannot resist a punch line. (“I had her eating out of my hand and then I noticed my arm was missing.”) By his account, theirs is a conventionally happy marriage of 20-plus years, and no, he feels the need to emphasize, he was never her father, adopted or otherwise. Nor, he insists, does he have an unnatural obsession with younger women, despite the fact that he is 35 years older than his wife and despite the evidence in his films.

Of course, it took Allen quite a while to reach marital bliss with Soon-Yi, and Apropos of Nothing gives us a guided tour of his other marriages and former relationships. There’s his first wife, Harlene, of a typically too-early union, whom he discards for the tempestuous (read “crazy”) Louise Lasser, featured in several of his earliest films. Their marriage lasted almost four years and according to Allen, they have remained friends since.

The same goes for Diane Keaton, who came into Allen’s life when she auditioned for his Broadway play, Play It Again, Sam, and then worked together on seven of his films, most of which (Annie Hall, Manhattan, Interiors, etc.) occurred after their romantic life was over.

He acknowledges, perhaps for the first time, an affair with college-age Stacey Nelkin, whose bit part in Annie Hall landed on the cutting room floor, but who inspired the character played by Mariel Hemingway in Manhattan. Yet he keeps insisting – with a straight face, at least in print – that there is nothing to his interest in substantially younger women.

And as I have said, if your interest in Allen’s memoirs is insights into his films, you will be mightily disappointed. He dismisses his first effort, Casino Royale, as “one of the worst, dumbest wastes of celluloid in film history,” without much elaboration. He calls his first drama, Interiors, a “failed” attempt and as to the Chekhovian September, he winces “It was Chekhov all right – Moe Chekhov the plumber.”

Late in the book, Allen seems to lose his attention span and ticks off his movies with one-line opinions. Crimes and Misdemeanors, one of his finest in my view, he considers a bad mash-up of comedy and drama and is particularly hard on the comic half. He likens it to “a bite from the tsetse fly. It caused slumber.”

As for Blue Jasmine, his attempt to be Tennessee Williams, he says, “Nice try, but no cigar.” If many of his assessments seem too harsh, others are far too positive. For instance, he calls his second attempt at evoking Williams, Wonder Wheel, with Kate Winslet, “my best yet,” with no further explanation. Huh?

Come to think of it, a shoddy cut-and-paste job is a pretty good description of Apropos of Nothing. The second half feels like he pulled notes out of his desk drawer – a filing system he has owned up to for his movie ideas – and then hastily added those notes to the book. Still, if this is the autobiography we are going to get from Allen, his fans will understandably devour it for the new morsels it provides.

Allen has made nearly 50 films, yet his prime regret in life is that he never made a great one. Again a too-harsh assessment, though it would be hard to disagree with his thought that “all my films could profit by a do-over.” And the same could be said of his memoirs.

APROPOS OF NOTHING, by Woody Allen. Arcade Publishing, 392 pages. $30.

Film: Playwright August Wilson began his chronicle of the African-American experience throughout the … END_OF_DOCUMENT_TOKEN_TO_BE_REPLACED

Film: Just in time with the opening of movie theaters in Palm Beach County comes the season’s most … END_OF_DOCUMENT_TOKEN_TO_BE_REPLACED

Music: The very last concert Franz Joseph Haydn attended in his life was in March 1808, about a year … END_OF_DOCUMENT_TOKEN_TO_BE_REPLACED