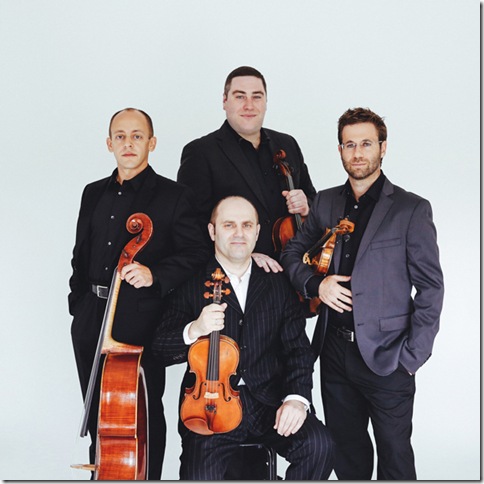 Pity poor Michael Haydn! Posterity has not treated him kindly. A respected composer in his time, he has suffered from the fame of his older brother, Franz Joseph, as well as comparisons with his younger contemporary Mozart.

Michael Haydn’s best-known symphony found its way into the Köchel catalogue of Mozart’s works as Symphony No. 37 because Mozart happened to write a brief slow introduction to its opening Allegro movement. The String Quintet in C Major was for many years wrongly attributed to Franz Joseph and originally published under his name. His acknowledged works appear very occasionally, as a novelty.

The Haydn Quintet contains many features of the older brother’s writing: the same structural design, similar shaping of the themes. No wonder it passed for so long under Franz Joseph’s name. The work doesn’t have the profundity, nor the harmonic originality of Mozart’s late quintets for this combination, but it is well crafted and brightly optimistic. Its straightforward melodies and exposed harmonic language showed from the start the characteristics of the Amernet ensemble: incisive rhythms, brisk tempos, a bit of roughness thrown in and a high energy level that gets them through.

In general, the group is more successful in fast, lively playing than in sustained slow movements, but the present selection, happily, favored the kinetic over the ethereal. Wolf’s brief Serenade, a melodious dialogue among the four standard string quartet instruments, offered an enchanting amuse-bouche before the demanding and difficult Bartok.

Bartok wrote six string quartets, of which the Nos. 3 and 4, composed in 1927-28, are the most advanced and experimental. In the third, he compacted a whole new vision of the form into a single 16-minute movement. He developed the entire piece out of a tiny four-note motive. He explored the sonic possibilities of each instrument by extending standard string techniques of pizzicato (plucking the strings), glissando (sliding), col legno (playing with the wood of the bow), sul ponticello (playing high up on the bridge), and much more. And he maintained his ties with the propulsive rhythms and melodic quirks of Hungarian folk music. The result is a magnificent workout for players and listeners alike. The performers even managed to make it seem like fun at times, notably in the runny tunes of the first allegro section.

One of the many things that makes Chameleon events so pleasant is the spacial proximity and vibrant acoustic of the Leiser concert room, which gives the feeling of a private concert for each individual listener. This was particularly evident in Rimsky-Korsakov’s salon-music sextet, which took up the entire second half. This rarely heard work, created for a contest the composer did not win, provided a refreshing relaxation from what had come before.

The five movements are all cheerful and melodious — easy listening, 1876-style. Even the second movement’s little six-part fugue comes across as anything but scholarly. This doesn’t mean that it’s easy to perform, but as it happened, this work was the most technically unflawed of the afternoon. The scherzo following the fugue, a lively Italian saltarello, exuded joy. The sentimental main theme of the Andante was articulated by cellist van Eck with full tone and particularly expressive appeal.

It’s worth noting that the Amernet Quartet went directly from this arduous program to the nearby Hyatt Regency’s revolving rooftop venue, to play a sequence of lighter music (which duplicated only the Wolf Serenade) for a Serenade @ Sunset, presented by Fort Lauderdale’s Symphony of the Americas. They played individual movements from quartets by Joseph Haydn, Ravel, Dvořák and concentration camp victim Erwin Schulhoff. To their credit, the Amernet players came across as animated and enthusiastic as if they were just beginning their day.

Film: Playwright August Wilson began his chronicle of the African-American experience throughout the … END_OF_DOCUMENT_TOKEN_TO_BE_REPLACED

Film: Just in time with the opening of movie theaters in Palm Beach County comes the season’s most … END_OF_DOCUMENT_TOKEN_TO_BE_REPLACED

Music: The very last concert Franz Joseph Haydn attended in his life was in March 1808, about a year … END_OF_DOCUMENT_TOKEN_TO_BE_REPLACED