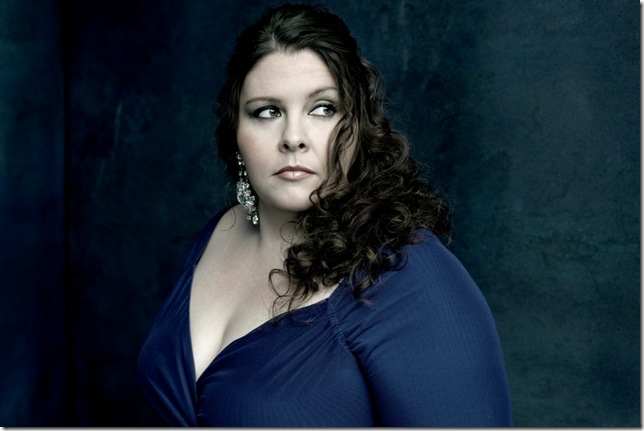 Soprano Angela Meade is the winner of the 2011 Richard Tucker Award and the 2012 Beverly Sills Artist Award from the Metropolitan Opera. Less than four years after her professional debut, she has quickly become recognized as one of the outstanding vocalists of her generation. Meade is from Washington State where she was a pre-med major before discovering her love of singing. She currently resides in New York.

Meade joined an elite group of history’s singers when she made her professional operatic debut on the stage of the Metropolitan Opera as Elvira in Verdi’s Ernani, substituting for an ill colleague in March 2008. Ronald Blum of the Associated Press wrote of the debut, “she showed a vibrant voice with nice color and an assured technique and sang like an old pro from start to finish.”

She had previously sung on the Met stage as one of the winners of the 2007 Metropolitan Opera National Council Auditions, a process that is documented in the film The Audition, recently released on DVD by Decca. The New York Times called Meade “an impressive soprano who powered out a Casta Diva from Bellini’s Norma that left everyone breathless.”

Meade reprises her role as Elvira in today’s live Met broadcast. On March 10, she will appear with tenor James Valenti and mezzo-soprano Jennifer Johnson Cano in a program called Opera Goes to the Movies, at the Festival of the Arts Boca in Mizner Park.

Joanna Marie: What did it feel like to win the Beverly Sills Award?

J: You’ve won a total of 55 competition prizes. You’re performing in major roles. What is the difference between preparing for a competition and preparing to perform on the Met stage?

A: Well obviously a competition is a, not smaller thing to do, but it’s a different sort of preparation, I guess. You’re only preparing a couple of pieces to sing, whereas preparing a role, it’s a much longer sort of preparation kind of thing. But at the same time, competitions are probably more difficult in the aspect that you have to be five different characters when you’re preparing for a competition versus when you’re preparing for a role, you’re just one character. You know competitions, it’s usually different styles of music that you have to sing all in one evening. So it’s difficult in that aspect. They each have their own different challenges.

J.: Speaking of challenges, let’s talk about your Met debut, which happened in 2008. Did you even have a chance to be nervous?

A.: Not really. They called me the day before and said Ms. [Sondra] Radvanovsky has canceled for tomorrow night. Would you like to go on? And of course I jumped at the opportunity. “Yes, I’d love to go on!” And I was busy calling my family and friends and booking plane tickets for my parents to come out from Seattle and I just don’t think I had a chance to be nervous about it. I went the next day and I rehearsed with the Maestro, I grabbed some dinner and they put me in a costume, they pushed me on stage and that’s how it happened.

J.: You are singing that same role at the Met now, Elvira in Verdi’s Ernani. Talk about the difference between that experience and your experience now.

A.: It’s a totally different experience in that you’re able to really comfortably fit into the role, and find different things dramatically and vocally that I didn’t have a chance to find really the last time I did it in 2008 because it was such a whirlwind. I had never rehearsed with the people I was singing with on stage and so, to try to anticipate what they were going to do on stage, and what I needed to remember to do [was difficult]. So it’s a totally different experience now. Because I feel completely, totally, and utterly prepared to do it now. I felt prepared before, but in a different way.

J.: You’ll be making your Met HD broadcast debut [today]. Will that performance be any different for you?

A.: I’m going to try to not think of it as any different. I’m going to try to not let the cameras distract me. I don’t think that you can see them from the stage. They taped some on the final dress rehearsal, scratch taping they call it, and it wasn’t real obvious they were there, so I’m gonna try to not remember that they’re there and just do what I do, and hope for a good product in the end. I do already have my ticket to see the encore broadcast.

J. :You receive rave reviews for your performance of Norma at Caramoor. That is another very demanding role. How do you make it through an entire night in those kinds of roles?

A.: I think it’s all about preparation. When you sing roles like Norma, Anna Bolena, Maria Stuarda, things like that, when they’re on stage the entire night and there’s a lot of intense singing going on, you have to build up to it. You can’t sort of go from singing a small role to a huge role all in one fell swoop. You have to sort of build up to it and build your stamina up. When I sang Anna Bolena for the first time, when I was at the Academy of Vocal Arts, it was a challenge once I got to the end figuring out how to save up for the end the reserves needed, and it was something that, over the years, when I finally did it again this fall at the Met, that I was able really fit into the role and figure out how to pace myself to get to the end. I think that’s what a lot of these big roles are about: Pacing. Not giving too much at the beginning, so that you don’t have anything left at the end. And that just comes with age and experience and working through it.

J. : These are such emotional roles. How do you keep yourself from going over the edge emotionally?

A.: You can sort of, you can feel it inside. You can feel that you’re going to tip over the edge and cry. You can feel that you’re going to scream at somebody and maybe hurt your vocal cords. So, just like in real life, where you know how to stop yourself from going too far with emotions. You have to do the same thing on stage. And say, ‘If I really let myself go there, it’s going to cause a problem.’ It’s really difficult sometimes because you get so wrapped up in and so involved in the character and the actual situation that you sometimes want to topple over the edge and I have actually done it before. I’ve actually cried on stage before in performance and it was difficult to proceed.

J.: When were you first exposed to opera?

A.: Not until I got into college. I was attending pre-med classes at a community college and I was in the community college choir. The director said to me one day that you really enjoy music, you have curiosity for the music and that you sing really well. She said “Would you be interested in taking some lessons with a friend of mine who used to teach at Pacific Lutheran University?” And I said, ‘Yeah I’d love to.’ So I went and took some lessons from him and found that it was a really natural way for me to sing and express myself. So really it was then that I — I mean I was exposed to some classical music, but never really to opera. My parents didn’t listen to it. I didn’t really know what it was. You know, I had the same preconceived notion of it that everybody else does, you know: the Brünnhilde character in horns and stuff. I’d seen it in passing, but I didn’t really know what it was.

J.: What music did you listen to growing up?

A.: You know, the top 40. And my parents always played, like, the oldies, the old rock and roll and doo-wop music. We listened to some country. I listened to pop music.

J.: What roles do you want to do that you haven’t done yet?

J.: On March 10 you will be in Boca Raton performing at the Festival of the Arts Boca, in a program called Opera Goes to the Movies. What will you be singing?

J.: Also performing that night is the 2010 recipient of the Richard Tucker Award, James Valenti. Have the two of you worked together before?

A.: We actually have not really worked together before, not in a role, not in an opera together. We have sung together at the Tucker Foundation actually, the year that he won, the year before I won, I sang on the Gala, the year before I won. And we sang in the [La] Rondine quartet together, but other than that, no. We were both at AVA (Academy of Vocal Arts), but he was there, his last year, that I came in my first year and we never worked together there. So we were sort of ships passing in the night.

Opera Goes to the Movies is set for 7:30 p.m. Saturday at the Festival of the Arts Boca in Mizner Park. Constantine Kitsopoulos will conduct the Boca Raton Symphonia. Tickets and information about the entire festival can be found at http://www.festivaloftheartsboca.org/

Joanna Marie is an active member of the South Florida arts community. She lives in Boca Raton and can be reached at classicalvariations@yahoo.com

Film: Playwright August Wilson began his chronicle of the African-American experience throughout the … END_OF_DOCUMENT_TOKEN_TO_BE_REPLACED

Film: Just in time with the opening of movie theaters in Palm Beach County comes the season’s most … END_OF_DOCUMENT_TOKEN_TO_BE_REPLACED

Music: The very last concert Franz Joseph Haydn attended in his life was in March 1808, about a year … END_OF_DOCUMENT_TOKEN_TO_BE_REPLACED