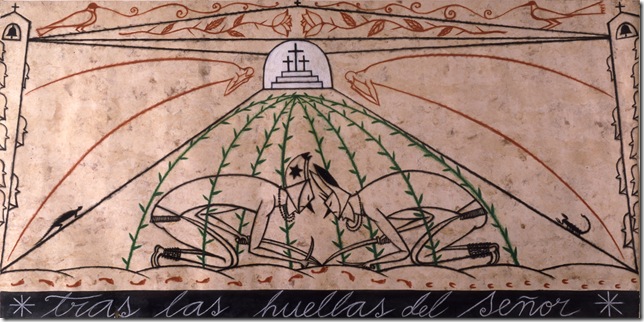 The idea to open José Bedia’s major career retrospective, now showing at the Miami Art Museum, with a painting of Coballende is a brilliant one.

In the Afro-Cuban religion of Palo Monte, this god is the patron of the sick, the disabled and the homeless and wandering; his equivalent in Catholicism is St. Lazarus, and in Bedia’s sprawling acrylic on canvas, Coballende, like Lazarus, is depicted with crutches and two small dogs in attendance.

The visual similarities between the saint and the deity end here. Bedia presents this figure as a hulking and broad-shouldered entity possessing not only a great spiritual power but a physically formidable one as well. Carrying two slaves on his arms, Coballende faces a long stretch of road leading to an ornate building painted small and deeply into the canvas.

While the work is an interpretation of a yearly pilgrimage made to a church in Havana, it also speaks to many of this exhibit’s themes: the earthly presence of spirituality, faith in the face of hardship, social equality, and the attainment of higher knowledge through the acts of travel and migration. 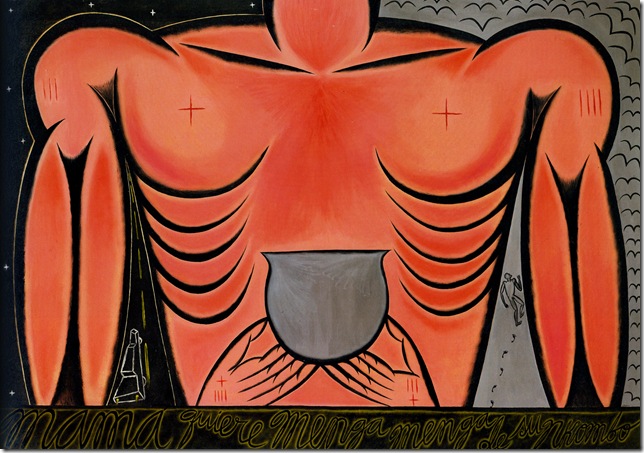 Transcultural Pilgrim: Three Decades of Work by José Bedia visually tracks the Cuban-born artist’s 30-year study of, and immersion in, the religions of the Americas and Africa, featuring 35 large-scale paintings, installations, and drawings that examine multicultural beliefs and icons with a personal fervor. This always blurred, or arguably, non-existent, line between art and life permeates much of Bedia’s work, and this idea of diaphanous boundaries is exactly what this memorable show presents in five parts, which can easily be considered as brief chapters in the larger text of an artist’s life.

The show’s first section considers Bedia’s practice of Palo Monte Mayombe, which he became initiated in while living in his native Cuba in the early 1980s. Brought from Central Africa to Cuba by slaves in the 16th century, this form of worship blends Spanish Catholicism with African, nature-centric religions, and at its ritualistic center is the nganga, a sacred cauldron unique to each practitioner.

Bedia’s ngangas appear in sundry forms that embrace mixed mediums (pencil, acrylic, ink, collage, pastel, to note some examples) as readily as they give access to Bedia’s singular cosmos. In ink on amate paper, Nganga Nkisi depicts an enormous skull symbolizing the presence of ancestors. It protrudes from the lip of a nganga, along with an imposing spirit brandishing a staff protectively over a man, who also holds a staff in his own hand. The cauldron serves as a source of power that is ultimately transposed to those who revere it, and the artist’s use of coarse lines and minimalistic shapes adds to the idea that something as ephemeral as faith can also possess a commanding physicality.

Bedia repeats the imagery of cauldron-as-conduit in imaginative ways. In the painting Mama Quiere Menga, Menga de su Nkombo (Mama Wants Blood, Blood of His Bull), he places the nganga at the literal center of a man’s existence, his torso, and Piango Piango Llega Lejos (Step by Step You Can Go Far), an acrylic stain-and-oil pastel on canvas, posits the cauldron as but one element in a constellation shaped like a man; each joint of his countenance glows with a bright yellow star. He is both heavenly and, thanks to the nganga, grounded in the objects of this world. 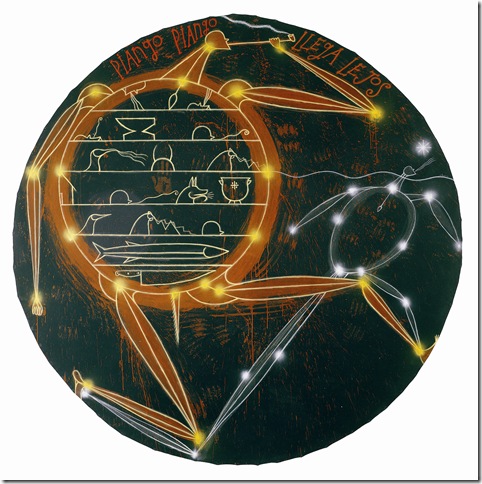 Perhaps Bedia’s most intimate depiction of the nganga is found in the altar he has assembled specifically for the museum, its iron shape filled with palos (or sticks), and the surrounding enclave by herbs, liquors, bottles and shells, animal and human hair, and soil, presumably from a cemetery or grave. Altar-as-installation became quite fashionable in the early aughts, with homages to everything from pop culture products (think Spam or YoYos) to artists such as Andy Warhol or Frida Kahlo. None of the many I saw had the authentic presence of Bedia’s, which is clearly a functional tribute to the religion that transformed the way he views humanity, himself, and subsequently, his art.

Subsequent sections of the exhibit honor Caribbean folklore and revolutionary figures, Bedia’s sojourns in Mexico, and his studies with the Lakota in the Southwest and shamans in the Amazon. His use of black in many of the resulting works is extraordinary. Bedia’s black carries the expected density but with a surprising degree of gradations, at times appearing malleable or even liquid.

Papá Liborio No Esta Muerto Ná (Papa Liborio Is Not Dead, No) portrays the Dominican anti-colonial leader and folk hero Olivorio Mateo Ledesma in death, but not as a powerless corpse. His body is supine and skeletal, yes, but because of Bedia’s use of gold and glowing sorts of shadows, Papa Liborio appears to vibrate with purpose, perhaps more powerful in an afterlife unencumbered by social and economic distinctions.

In Siguiendo Su Instinto (Following his Instinct), an 18″-by-61” painting, Bedia presents a horned and cigar-smoking creature dragging two suitcases behind him as he briskly follows a quatrain of birds. Black colors the earth, man, and animals, charging each with a forward moving energy and the sense that mystery is an integral part of adaptability. Only the horizon and the subtly drawn knife that pursues the figure appear colorless, as if both are ill-matched against his intentions. 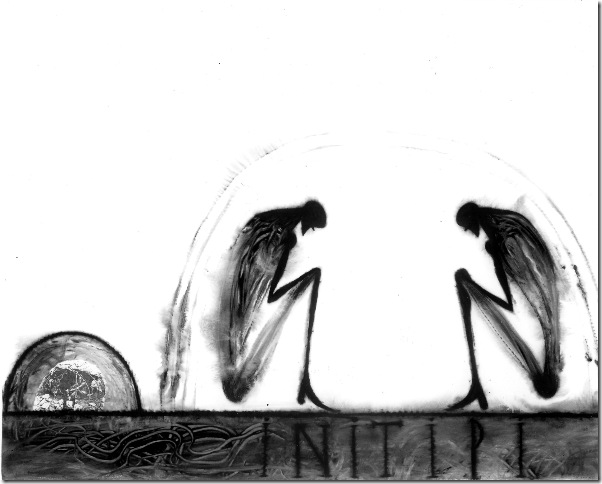 In an ancillary gallery, two brief films run document Bedia installing his work at the museum, some of which he constructed directly on its walls, and discussing his sources of inspiration. The films are worth watching because they reveal a process that is as laborious as it is devoted, one that includes detailed note taking on his travels, photographs, sketches, and a vast gathering of artifacts from Africa and the indigenous Americas — all this before he even begins a piece. “Every day, they teach me something,” says Bedia about his collections, some of which are also on display. “For me, it’s important to be surrounded by these things.”

Film: Playwright August Wilson began his chronicle of the African-American experience throughout the … END_OF_DOCUMENT_TOKEN_TO_BE_REPLACED

Film: Just in time with the opening of movie theaters in Palm Beach County comes the season’s most … END_OF_DOCUMENT_TOKEN_TO_BE_REPLACED

Music: The very last concert Franz Joseph Haydn attended in his life was in March 1808, about a year … END_OF_DOCUMENT_TOKEN_TO_BE_REPLACED