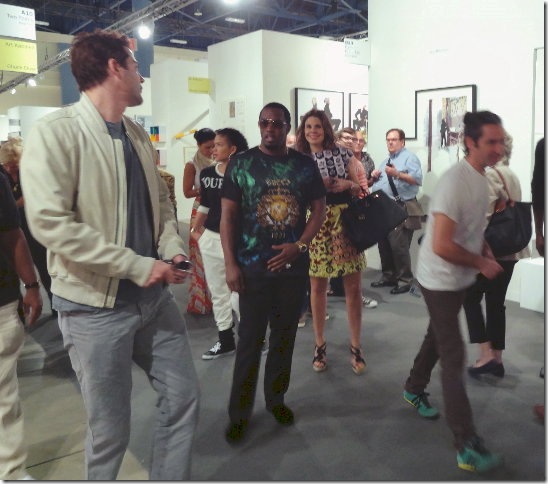 During the first week of December, Miami Beach is the “must-see” premier destination for thousands of art collectors, museum curators, art lovers and artists.

On Wednesday, the press and VIPs converged on Art Basel Miami in the Miami Beach Convention Center to see 257 galleries from 31 countries. Art Basel, which runs through Sunday, presents contemporary and historical works.

Kicking off the show was Norman Braman, chairman of the host committee, and Matti Herrera Brower, mayor of Miami Beach, along with the committee.

“We don’t rest on our laurels from past years,” said Braman, who helped bring the fair to Miami. “Eleven years ago, we held our first fair. Today in the Miami area, there are more than 25 other art fairs, 1345 galleries, more than 4,000 artists and an international jewelry fair.”

The economic impact of these art fairs has been astounding. “Prior to the fairs, there were only eight galleries in the Miami-Dade community,” Braman added. “Now there are 140 galleries.”

Brower said that saving the historical buildings of Miami Beach initiated the renaissance of the city and that the art scene “has affected everyone’s lives.” 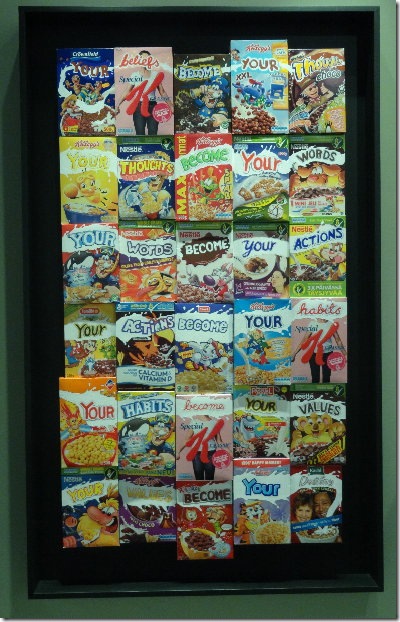 The show’s vernissage opened at 6 p.m. Wednesday, but VIP collectors were allowed access to the show at 11 a.m., and they and celebrities such as rapper and music mogul Sean Combs combed the aisles with their art advisers looking for emerging talent.

While the longstanding galleries with modern and contemporary masters have premier locations at the front of the show, there are many young galleries presenting cutting-edge work.

Recording the scene for ArtForceTV was artist-entrepreneur-art critic and Palm Beach resident Bruce Helander in his trademark orange bowler hat. Helander, with his in-depth knowledge of the art world, deliver flowing commentary on the art in booth after booth.

Another Palm Beacher at the fair was gallery owner Ellen Liman, who said she had already been to five other venues. “Painting is back, and it’s about time,” she said. 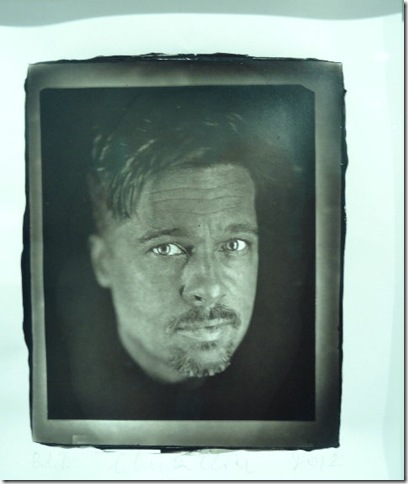 Interesting new work by Chuck Close was on display; these were photographs produced with a century-and-a-half old technique called Woodburytype. The technique used dichromated gelatin which, when exposed to light, creates a relief related to the tonal range of the subject. Then that piece is used to form a separate image on a lead plate, which is then printed on paper. With a very limited depth of field and the immense tonal range, the final images have an otherworldly look. Close’s subjects include Brad Pitt, as well as nudes of Kate Moss.

Part of the attraction of these shows, and contemporary art in general, is unraveling the mystery, which can be summed up in this question: “What in the hell am I looking at and why?” Sometimes, quite honestly, I think the public is being sold multiple sets of “the emperor’s new clothes.” But, just as often, as one discusses the art with the gallery owners, there’s an “a-ha” moment that clears up the confusion.

Yet sometimes one just wants to laugh at the tremendous absurdity of a piece, and maybe that’s what the artist intended. One such piece is in the Parkett booth, where artist Monika Sosnowska is showing a kinetic piece called Fly Repellent. This limited edition piece for $2,800 consists of 2 frosted plastic shopping bags on opposite ends of a wire with a motor in the middle rotating the piece (yes, I am wondering now why I am even spending my time writing about it). 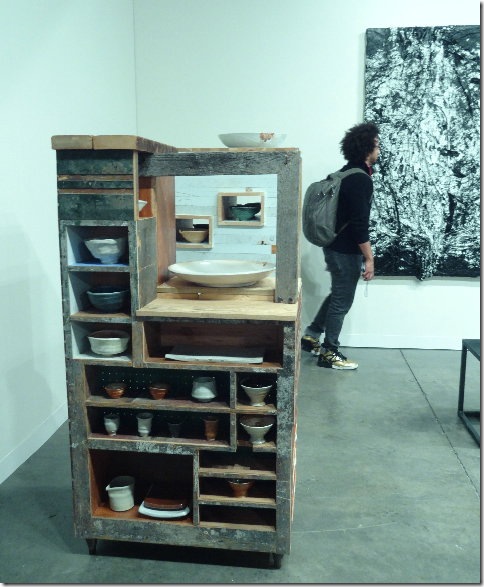 Further down the row in the Kavi Gupta gallery was work by Theaster Gates, an African-American Chicago-born artist who transforms spaces and communities through his social practice installations. With a degree in urban planning, he is committed to bringing art and culture to poor neighborhoods, according to the gallery’s assistant director Emanuel Aguilar.

In the booth are two wooden structures in which ceramic vessels, created in collaboration with Japanese potters, are placed throughout in corners and open compartments. The constructions are for impromptu soul dinners, designed for sharing ideas and cultures.

A 6-foot tall, thin wooden sculpture of a peaceful woman, Marianna H., by Barcelona-born Jaume Plensa, in Galerie Lelong, was attractive and reminded me of the distorted latex sculptures of Evan Perry. 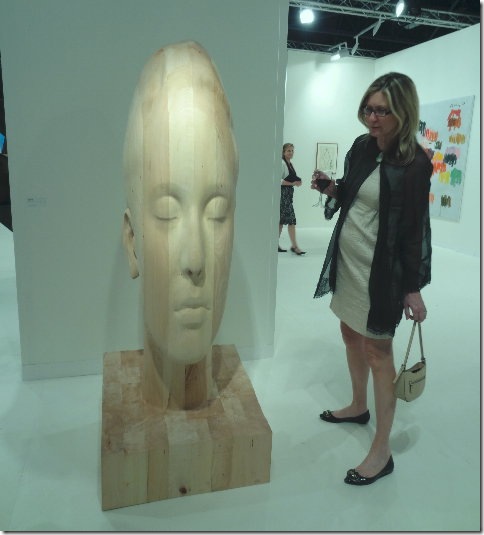 These are just a few of the events at Art Basel, where there are also video and film showings, gallery and curator talks, public outdoor events, private collection visits and more. (For more information, see miamibeach.artbasel.com)

Design Miami is also in the parking lot across from the Convention Center.

On the other side of the bay, in Miami, are many other art shows, including the larger-than-ever ArtMiami, Red Dot, Art Asia, Miami Project and Wynwood, and much more. 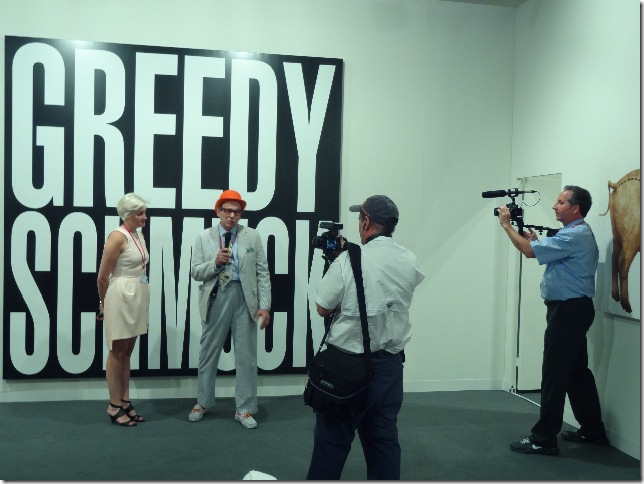 After the shows close, stroll down Lincoln Road where the restaurants, bars, shops and galleries stay open late. One block north of Lincoln Road on Collins Avenue is the Sagamore Hotel, which has an outstanding contemporary art collection that even extends up through its stairwell to the top floor.

It’s no wonder that the world loves the art scene in Miami. There’s something interesting to look at and do from morning until the wee hours of the night, discovering and learning, partying and socializing, and unraveling the mystery of art.

Film: Playwright August Wilson began his chronicle of the African-American experience throughout the … END_OF_DOCUMENT_TOKEN_TO_BE_REPLACED

Film: Just in time with the opening of movie theaters in Palm Beach County comes the season’s most … END_OF_DOCUMENT_TOKEN_TO_BE_REPLACED

Music: The very last concert Franz Joseph Haydn attended in his life was in March 1808, about a year … END_OF_DOCUMENT_TOKEN_TO_BE_REPLACED