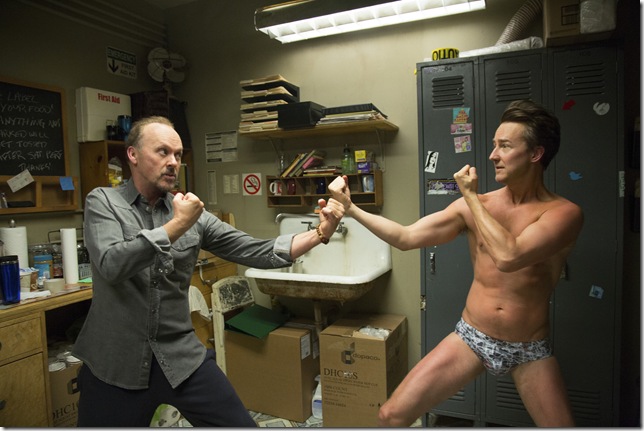 Alejandro González Iñárritu’s Birdman dares you to look away. And it does so by never cutting. At least, that’s the way it appears — like one long, continuous, two-hour tracking shot somehow encompassing several days in the narrative, if not weeks. Jaws will drop early and often, especially among cinephiles in the audience, but Birdman isn’t Russian Ark: This visual feat was accomplished by cinematographer Emmanuel Lubezki through digital sleight of hand.

But the impact is mesmerizingly similar, resulting in a film of astonishing forethought and ambition whose very subject is the relentlessness of time and space, the endless locomotive propulsion of life, the many stages and corridors of fame and the human mind. It’s a staggering movie unlike any other, and it opens with an exterior shot of a fireball plummeting to earth.

Then we cut — the first visible edit for the next 115 minutes or so — to a man levitating in his dressing room in the St. James Theatre, on Broadway. This is Riggan Thomson (Michael Keaton), an actor whose notoriety peaked in the ’90s in a franchise of shallow blockbusters in which he played Birdman, a beaked superhero. He’s on Broadway now to rehearse his solemn comeback — an adaptation of Raymond Carver’s short story “What We Talk About When We Talk About Love,” a project he’s writing, directing and starring in, as a way to prove to himself and the world that he’s an artist, not a washed-up action star. (There’s more than a little art imitating life here; Keaton is, of course, still most known for Batman, the film that made him a household name, and he was brave to take this warts-and-all performance.)

The production seems star-crossed long before opening night. In one of the first scenes in Birdman, set the day before the play’s first preview, a stage light drops onto the head of an actor like a shooting star, sending him to the hospital. Riggan and his stage manager, Jake (Zach Galifianakis who, like, Keaton, has never been better), scramble to find a replacement, quickly landing mercurial film actor Mike Shiner (Edward Norton) who happens to “sharing a vagina” (her words) with one of the show’s supporting actors, Lesley (Naomi Watts).

Mike’s stage antics, at the service of both Method acting and his own ego, threaten to derail the production time and again. And offstage, he can’t resist flirting with Sam (Emma Stone), Riggan’s daughter/assistant, who shares with her father a gene for addiction and the occasional suicidal urge. It’s enough that Riggan can get through each day without collapsing in piles of his own blood, sweat and regret, especially with the devilish spirit of Birdman shouting invectives at him from the bowels of his psyche. But hey, at least he can occasionally move things with his mind, and levitate in times of distress.

Part of the unusual magnificence of Birdman is that it approaches surrealism without fully succumbing to it, at least until the final reel. Hyperrealism rubbing against increasing absurdity, this is a studio comedy whose antecedents are Buñuel, Tarkovsky and Charlie Kaufman. But the result is entirely Iñárritu’s, and it’s unquestionably the best thing he’s ever made, his penchant for sprawling, overcooked character mosaics confined beautifully to one bustling Broadway theater.

Unpredictable every step of the way, right up until its boldly ambiguous final shot, Birdman is both mystical and grounded, technically acrobatic yet fully invested in the earthbound struggles, heartbreak and minutiae of putting on a play. It’s a movie full of profoundly hard truths about life and showbiz, delivered in pitiless outbursts and withering diatribes. It presents people always in makeup but free of airbrushing, their mental scars showing through their perfect faces.

And, like so many films that aim to capture our zeitgeist, Birdman is about social media and its implications, about the nature of notoriety in the 21st century, of lives measured by Likes and Re-tweets, where if you’re not trending, you’re forgotten. This is the reality Riggan Thomson faces: Adapt or face obsolescence. Birdman is a repository of show business fears, anxieties, insecurities, hubris, and delusions, all of which feed into one thing: the universal — but especially American — quest to matter. It’s what we talk about when we talk about art.

Film: Playwright August Wilson began his chronicle of the African-American experience throughout the … END_OF_DOCUMENT_TOKEN_TO_BE_REPLACED

Film: Just in time with the opening of movie theaters in Palm Beach County comes the season’s most … END_OF_DOCUMENT_TOKEN_TO_BE_REPLACED

Music: The very last concert Franz Joseph Haydn attended in his life was in March 1808, about a year … END_OF_DOCUMENT_TOKEN_TO_BE_REPLACED