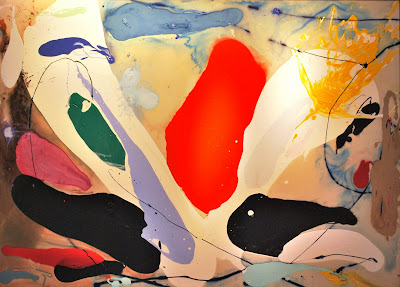 By Jenifer A. Vogt

It is often a delight when a museum reaches into its permanent collection and unearths hidden treasures that are rarely, if ever, seen. It’s a practical impossibility for any art institution to display all the works acquired throughout the years.

This leaves the curatorial staff charged with the disheartening task of labeling some works worthy of display and others not. But always, in the back of their minds, they’ve cataloged those underplayed works awaiting an opportunity to give them their due.

The museum’s chief curator and organizer of the exhibit, Wendy Blazier, knew of “hundreds of works – beautiful paintings that we had not had the opportunity to show. And there were a group of these strong abstract works from the ’70s and ’80s that showed a seminal period for a group of young, emerging painters.”

Their style was referred to as Lyrical Abstraction. The phrase was coined by Larry Aldrich, the founder of the Aldrich Museum of Contemporary Art in Ridgefield, Conn., in 1970 as he began to notice certain themes repeating themselves in the work of young painters.

At the time, Aldrich remarked, “it became apparent that in painting there was a movement away from the geometric, hard-edge, and minimal, toward more lyrical, sensuous, romantic abstractions in colors which were softer and more vibrant. Painters were creating, in significant numbers, works that were visually ‘beautiful’…”

These young artists, emerging on the heels of Pop Art, Conceptual Art, and Minimalism, exhibited a sheer sense of joy for the physicality and sensuousness of painting. Yet, they felt restricted by the flat, mathematical-like flat surfaces in vogue at the time. Plus, the art world was increasingly demanding breakthroughs and there was ongoing talk that painting was “dead.” What else could be done with this dying medium?

But these painters saw an opportunity for reinvention by incorporating the prior three decades of American painting into a new, fresh and bold statement. They paid homage to the structure and intellect of conceptual art, but they incorporated sweeping, gestural brushwork into their abstract compositions – infusing their work with the emotional energy of New York School painters such as Pollock and DeKooning.

Often, using the new acrylic paints, they worked to imbue a sculptural, surface dimension to their canvases. As Blazier explains, “These artists loved painting. They scoffed at the serious nihilism of the minimalists.” They merged the abstract and conceptual with bold color, making their work a medley of ideas, brushstroke, color, and emotion – hence, “lyrical.” 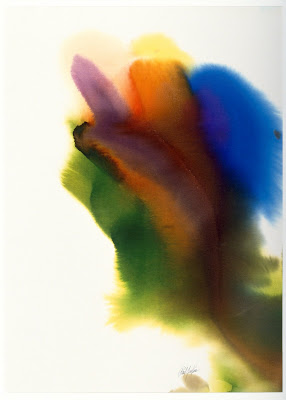 In Paul Jenkins’ A Sound of Surf (1970), one views large fields of sweeping color emerge from a minimal, whitewashed canvas. The watercolors beautifully bleed downward creating interesting pools of nuance. Here, as in all the works, you clearly see what Blazier calls “a marriage of sensibilities between the action of gestural abstraction, the quite nuances of color field, and the rational structure of minimalism.”

Combining intellect and emotion, the works on display bear testimony to Picasso’s remark, “There is no abstract art. One must always begin with something.”

Painting had been pronounced dead in the early ’70s and has been repeatedly deemed so in every period since. How unsettling for painters it must be that this misquoted remark, first made by French painter Paul Delaroche in the mid-1800s in reference to the advent of photography, lives on, despite the evidence of notable great painters emerging time and again after his utterance.

The truth is that paining is not dead, nor will it ever be. This charming exhibit serves as a gentle reminder of the triumph that is American painting.

Jenifer A. Vogt is a marketing communications professional and resident of Boca Raton. She’s been enamored with American painting for the past 20 years.

Film: Just in time with the opening of movie theaters in Palm Beach County comes the season’s most … END_OF_DOCUMENT_TOKEN_TO_BE_REPLACED

Music: The very last concert Franz Joseph Haydn attended in his life was in March 1808, about a year … END_OF_DOCUMENT_TOKEN_TO_BE_REPLACED