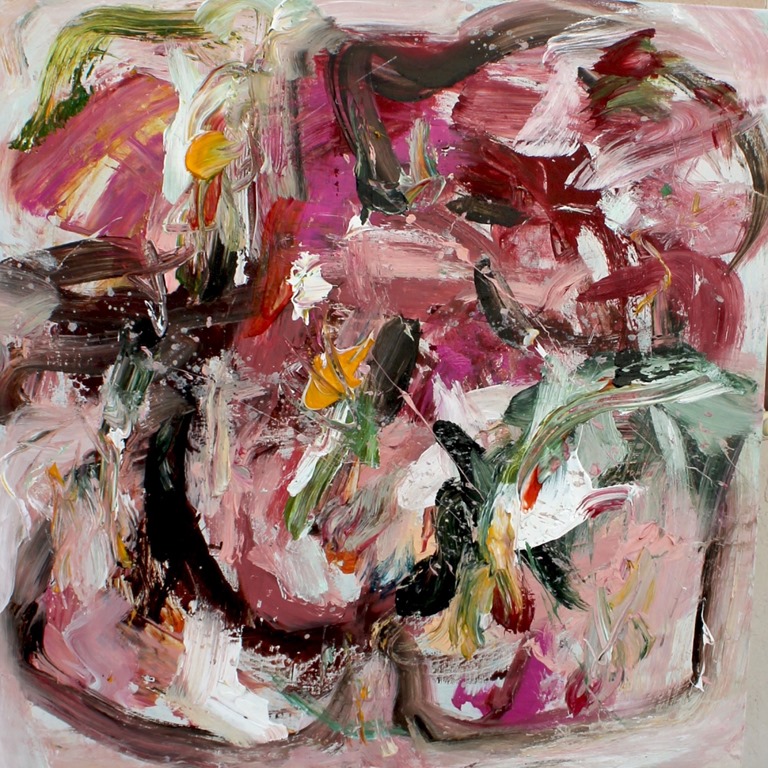 Abstract expressionist Alyssa di Edwardo lives and works in West Palm Beach, but for her paintings for her solo show, opening today at the Cultural Council, she travels to mystical medieval gardens and late 19th-century London, when Sherlock Holmes would be afoot solving his crimes.

The eight paintings in the exhibition, which runs through June 4, are drawn from two separate series by di Edwardo, Summer Land and Green Park.

Summer Land is a series of paintings inspired by di Edwardo’s study of the history of gardens. And in Green Park she delves into London.

Di Edwardo keeps a notecard, notes to herself, about the inspiration for each painting she creates. And each painting is part of a cycle or a series of paintings. 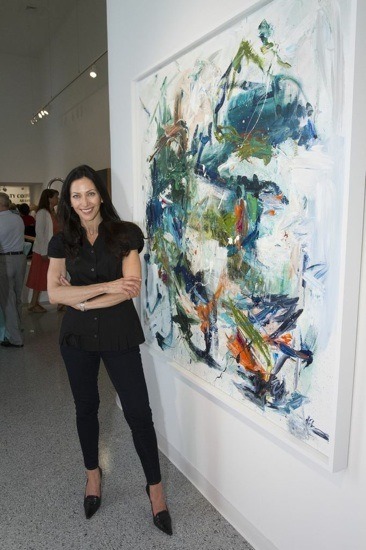 “I do paint in a cycle or a series. It’s always about a charged topic,” di Edwardo explains.

All the paintings in di Edwardo’s solo show are being exhibited publicly for the first time.

“It’s going to be a beautiful show,” says Nichole M. Hickey, manager of artist services at the Cultural Council. “There’s one large diptych and some smaller pieces as well.”

“She’s an abstract expressionist painter, highly gestural, reminiscent of Joan Mitchell, Willem de Kooning and Cecily Brown. But she has her own style.” 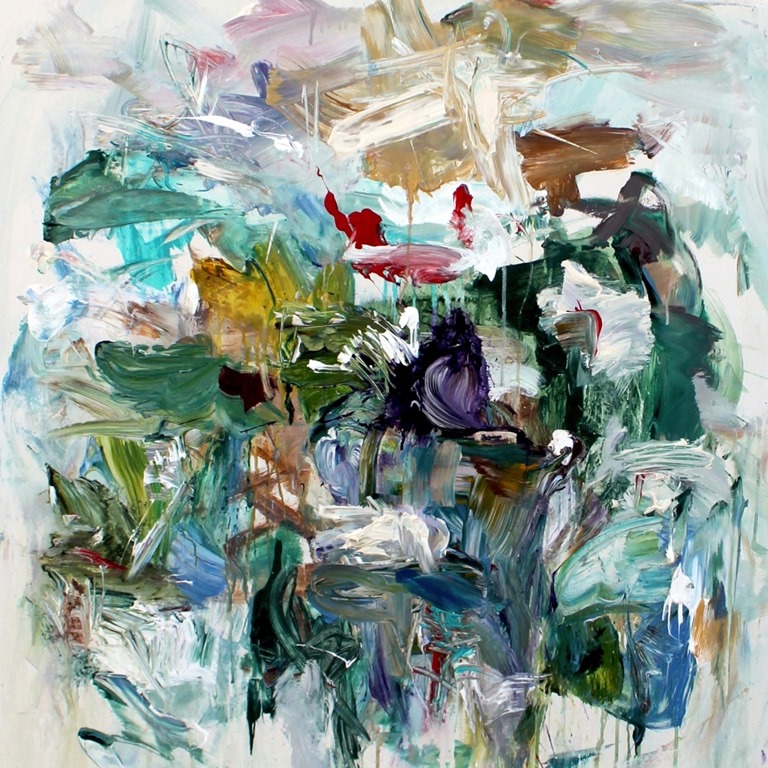 Round Pond, by Alyssa di Edwardo.

Di Edwardo, who celebrates her 59th birthday May 8, is the first recipient of the Dina Baker Fund for Mature Artists, which aims to stabilize and strengthen the careers of female artists 55 and over who reside or work in Palm Beach County.

As the Dina Baker 2015-2016 grantee, di Edwardo received a $10,000 grant and a solo exhibition at the Cultural Council for showcasing her art.

“As an artist matures from the interior, the exterior work emulates a depth that only years of experience and struggle can emerge,” di Edwardo said expressed at the time of her award.

She also thanked Dina Baker, a West Palm Beach artist who continues to create art in her 90s, for her financial support as an artist. 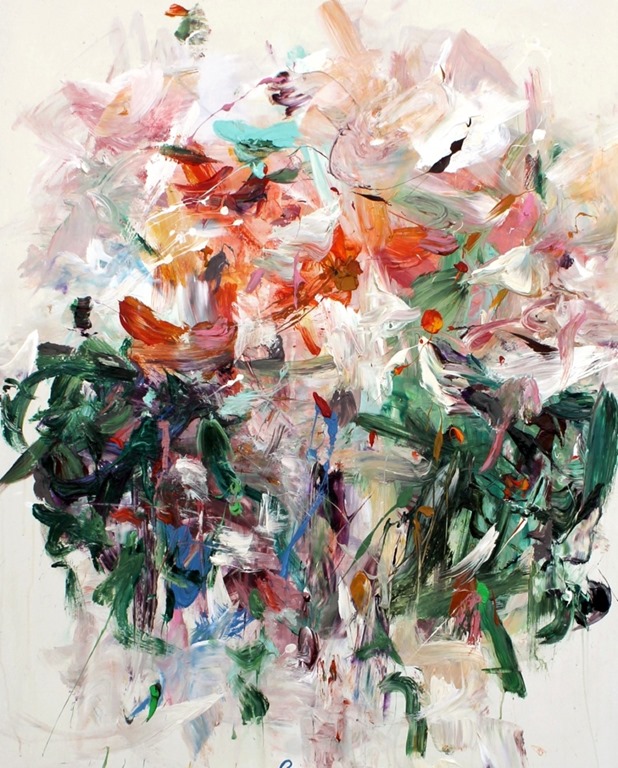 “It is such an honor to meet Ms. Baker and to be selected as the first recipient of this prestigious award,” di Edwardo said then. “When I look (to) the artists who have influenced my work such as Willem de Kooning, Georgia O’ Keeffe and Joan Mitchell, who painted their most prolific work after the age of 60, it inspires me further.”

She called recognition of the work of mature women artists “vital.”

“Art seen through a woman’s eyes is very specific. There is a different point of view. There’s an energetic quality. And I think there’s a fierceness, too,” di Edwardo says.

Di Edwardo grew up in New Jersey, moving to Florida at the age of 22. For many years, she worked as a paralegal by day, painting by night.

“You make the time. I worked full-time and painted at night. You do whatever you have to do,” Di Edwardo says. 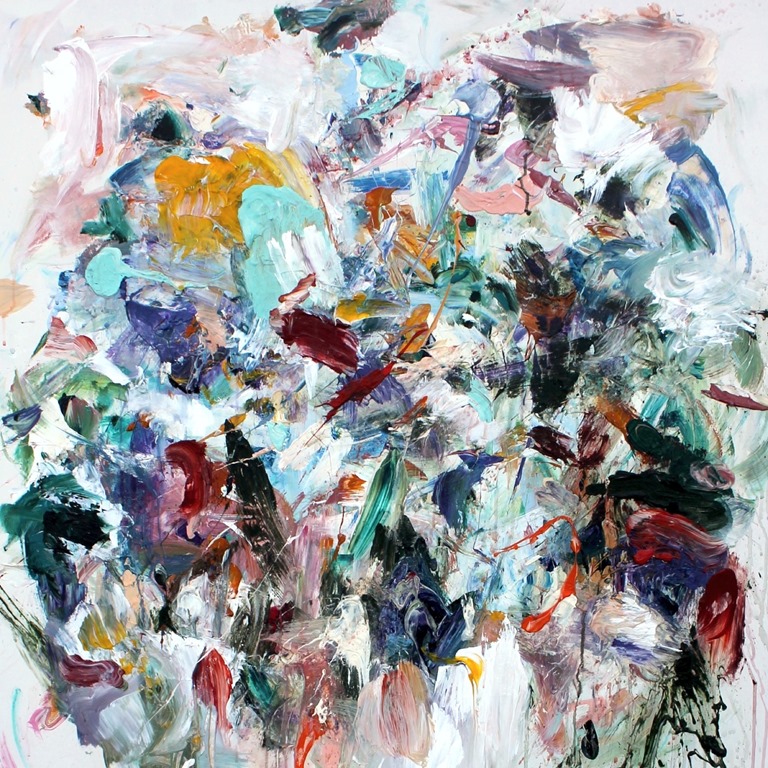 May, by Alyssa di Edwardo.

Now painting full-time, Di Edwardo finds inspiration in many things and studies the work and life of artists that she admires.

“I deeply appreciate all kinds of art. I find it all inspiring. I do because I’ve opened my mind to it. And I’ve self-educated myself to understand it.” Edwardo explains. “What makes art art, it’s not just the paint on the surface. It’s the energy it’s created with. It’s the energy behind that’s vital. That’s what people are picking up on.”

Di Edwardo knew she would be painting herself when she was just a teen.

“My whole life since I was a teen I knew I was going to paint. I just knew. Honestly ask yourself if you can dedicate yourself. It’s kind of like a marriage. You got to keep showing up,” di Edwardo says. “That’s how the joy becomes so rich.”

Gallery hours at the Cultural Council of Palm Beach County, located at 601 Lake Ave. in downtown Lake Worth, are from 10 a.m. to 5 p.m. Tuesday through Saturday. Admission is free. For more on the art of Alyssa di Edwardo, visit alyssadiedwardo.com.

Film: Playwright August Wilson began his chronicle of the African-American experience throughout the … END_OF_DOCUMENT_TOKEN_TO_BE_REPLACED

Film: Just in time with the opening of movie theaters in Palm Beach County comes the season’s most … END_OF_DOCUMENT_TOKEN_TO_BE_REPLACED

Music: The very last concert Franz Joseph Haydn attended in his life was in March 1808, about a year … END_OF_DOCUMENT_TOKEN_TO_BE_REPLACED