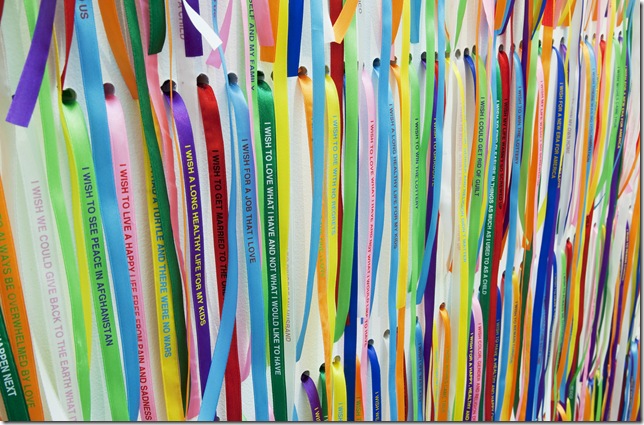 There’s one element to Rivane Neuenschwander’s artwork, now at the Miami Art Museum until Oct. 16, that probably won’t travel back with it to her native Brazil, yet it is an integral part of the exhibit: You.

Yes, you bring more to Neuenschwander’s mid-career survey, A Day Like Any Other, than you could possibly imagine. In fact, without you, more than half of this exhibit would not be possible. Apparently, you—well, perhaps let’s say people in general—inspire Neuenschwander to such a degree that their deepest emotions, fears and heartfelt wishes are integral to her creative process as an artist.

And this is precisely why Neuenschwander’s work is so poignantly good—good in a manner that makes one want to cuddle up in a corner of the gallery and just remain there so you can continue to feel the emotional benevolence granted by a work such as Eu Desejo o Seu Desejo / I Wish Your Wish, which is composed of thousands of colorful ribbons with other people’s wishes on them.

Part installation, part performance, the work hinges on a participant’s desire to not just take and safeguard another’s wish, but to share his or her own, which they then write on a small sheet of paper and deposit in a box. Later, the artist sorts through the thousands of wishes and chooses the ones that appeal to her for use in this ongoing work.

“It’s based on the traditions of a church in Brazil. You’re supposed to tie the ribbon around your wrist, and if you wear it until the ribbon falls off, your wish will come true,” senior curator Peter Boswell explained during a tour of the show, where the artist was also present. “When you come, you search around for a wish that you want and you take that ribbon and tie it around your wrist. Then you go over to the pen and pieces of paper and you wish a wish.”

Neuenschwander said there are two aspects of this installation that interest her above all.

“They are the participation—it’s a piece that changes everyday—it’s a live painting in a sense. It’s changing constantly. And it travels. The other thing—it’s something that nobody really knows—it looks very playful and funny, but behind every wish you actually have a fear,” she said. “If someone wishes for a long life, behind that might be the fear they would die soon.” 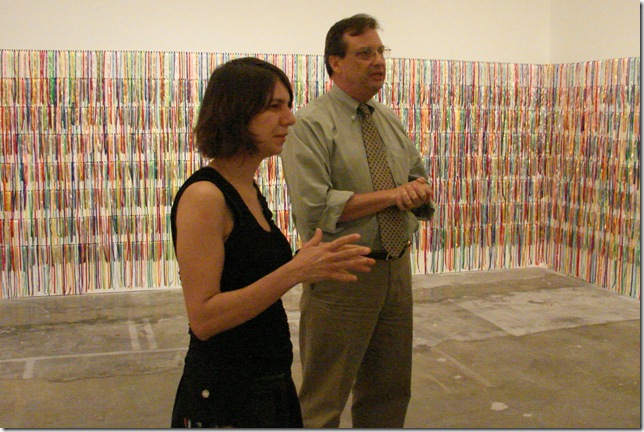 At this point, a tour participant eagerly interrupted the artist and displayed a wrist ribbon that had not yet fallen off, but which had worked nonetheless.

“We saw this for the first time in Buenos Aires and I took one of these ribbons. I wrote ‘I want a house with a garden in front.’ And then we moved to Miami and I got it,” she said, gleefully, to which the artist responded with a shy giggle.

In that very moment, the essence of Neuenschwander’s brilliance shone through. It’s her ability to affect both the mind and the heart of those who view, and engage with, her work. Neuenschwander was both genuinely touched by, and interested in, this individual and her outcome. Through her work, Neuenschwander expresses her unique sensitivity to the emotional experiences of the people whose lives she touches.

This makes her, to some degree, and in a very unique manner, an artist-social worker—encouraging you to reveal your innermost self. While most artists explore their own inner complexities and emotions and convey these through their work, Neuenschwander is less concerned with herself and more concerned with you. 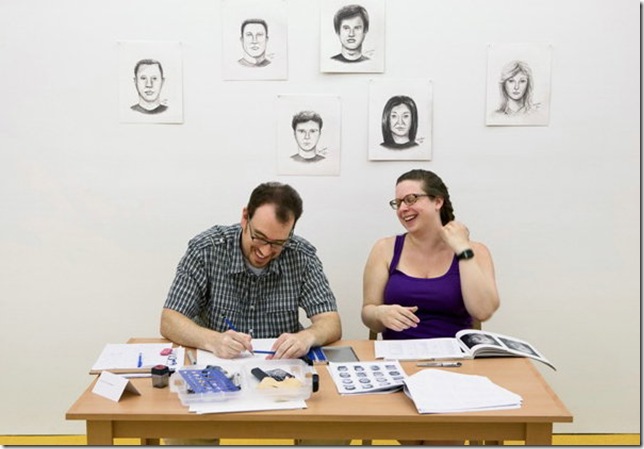 Moving further along through the exhibit, this becomes even more apparent with the installation-performance work, Premeiro Amor (First Love). Here, Neuenschwander really expects you to bare your soul. A table with two chairs sits in the gallery and, on certain dates during the exhibit, a police sketch artist is available. If you make an appointment (details here), the sketch artist will sit with you for about two hours as you recount the visual details of your first love’s appearance. The artist is trained to ask you psychologically probing questions that will spur your memory.

But not all first loves are good loves, and love is a double-edged sword that is both sweet and sour, depending on the moment. This is much like all of Neuenschwander’s work and the title of this exhibit alludes to this dichotomy. Our lives are marked by highs and lows, but, for the most part our days are like any other.

While much of Neuenschwander’s work does pivot on the personal relationship between the individual viewer with the work, it’s not entirely personal. Her work also tackles the global issues that affect everyone. In The Conversation, she is concerned with privacy and paranoia. Inspired by the 1974 Francis Ford Coppola movie of the same name, this work is eerily prescient. Exactly how much of our privacy will we surrender to the digital age in which we live?

The installation is disconcerting—and intentionally so. To produce this work, Neuenschwander began with wallpaper, carpeting and bric-a-brac scattered throughout the gallery. She then hid surveillance bugs within it. This was followed by hiring security experts to come and rake the room for the bugs. The audiotape of the workers searching is now played in a continuous loop in the installation. 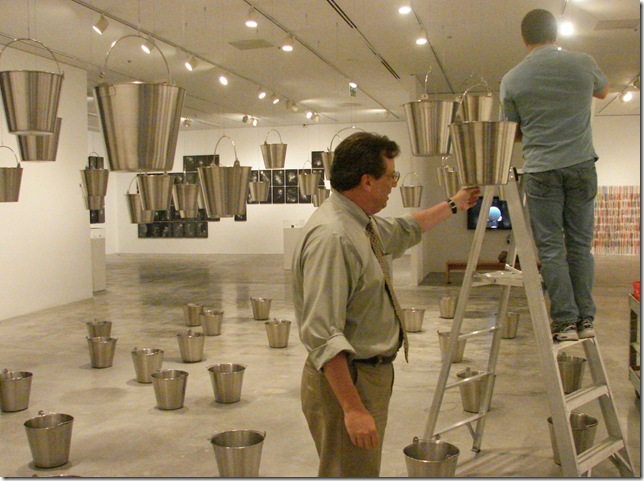 In Chove Chuva, Neuenschwander addresses an important global concern, albeit also local for her as a Brazilian. This work is part-installation, part-performance like many others throughout the show. And it’s important to point out that Neuenschwander hesitates to limit her work to any one category. When pressed, she will simply tell you that it is painting, drawing, installation, performance—that it is, to use her word, “everything.”

One can’t view Chove Chuva without thinking of the threatened Amazon rain forest. The work is comprised of buckets of water suspended from the ceiling, but they have a tiny hole in the bottom. So they slowly drip out throughout the day, creating a cacophony of water droplets that sound both ominous and eerily comforting. The work is not possible without the role of the hired assistant. Ladder in hand, he replenishes the buckets throughout the day. He represents the human influence.

One would have to be a completely emotionally shut down individual to make it through the aforementioned works, and the many others throughout Neuenschwander’s exhibit, without feeling some complex emotions. The combination of representation of global concerns juxtaposed against deeply personal ones is thought-provoking. Adding to the brilliance of Neuenschwander’s work, is her ability to encourage you to frame yourself both within the context of your own life, as well as within the broader global community.

Ultimately, one leaves A Day Like Any Other with a deep sense of gratitude to the artist for her sensitivity and the depth with which she portrays the complexities of daily life. It is, above all, a very affirming exhibit, albeit it one that tackles some grim realities.

Jenifer Mangione Vogt is a marketing communications professional and resident of Boca Raton. She’s been enamored with painting for most of her life. She studied art history and received her B.A. from Purchase College. Visit her blog at www.fineartnotebook.com.

Rivane Neuenschwander: A Day Like Any Other is on view at the Miami Art Museum until Oct. 16. Hours for this exhibition are Tuesday through Friday from 10 a.m. until 5 p.m., Saturday and Sunday from 12 p.m. until 5 p.m. Admission is $8 for adults, $4 for seniors, and free for students and children under 12. For more information call (305) 375-3000, or visit www.miamiartmuseum.org.

Film: Playwright August Wilson began his chronicle of the African-American experience throughout the … END_OF_DOCUMENT_TOKEN_TO_BE_REPLACED

Film: Just in time with the opening of movie theaters in Palm Beach County comes the season’s most … END_OF_DOCUMENT_TOKEN_TO_BE_REPLACED

Music: The very last concert Franz Joseph Haydn attended in his life was in March 1808, about a year … END_OF_DOCUMENT_TOKEN_TO_BE_REPLACED