Or it at least it seemed that way during the 20th National Poetry Slam that brought 68 teams of mostly young poets to Clematis Street for a rolling competition that was part counterculture festival, part sporting event.

Contestants declaimed from the stages of venues such as Roxy’s, the Respectable Street Café and Dr. Feelgood’s. Crowds of hip young people shouted, cheered, heckled and, sometimes, when the versifying grew rapid-fire and intense, snapped their fingers like beatniks.

“I really think poetry is a living thing now for all of us,” said Coon, whose organization accounted for the smattering of senior citizens among the bohemian twentysomethings. “Poets writing for the ear and poets writing for the page — both are opening modern literature for human beings.”

Inside, a rapt audience listened as Seaton, a poet with 13 books, and Blair, a past slam champion, took turns at the microphone. Seaton read from a page in her hand; Blair performed from memory, like a singer.

“A little-known fact is that we originally called this ‘Page vs. Stage,’ but we never meant it as a completion,” said Taylor Mali, a published poet and past slam champion who oversees a series of Page Meets Stage events at the Bowery Poetry Club in New York.

Had it been a competition, though, Blair would have won easily. Seaton’s poems were wan little things, subtle and faintly musical, and she didn’t put much oomph into the reading. By contrast, Blair was not only a master showman, but his verses were also complex and skillful – page-ready, in other words.

“I don’t think about performance as I write,” said Seaton, a former director of the creative writing program at the University of Miami. “But I do think about sound. I read the poems aloud as I write. I am so intimidated by the stage, but today I’m having so much fun with Blair, I’m reading better than usual.” 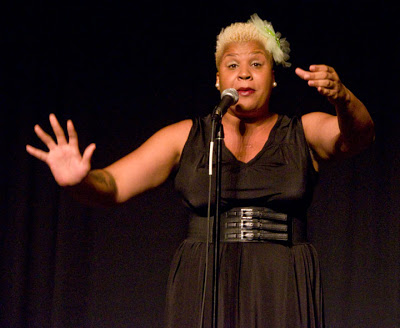 A struggling Chicago poet named Marc Smith invented slam poetry in 1984. Determined to rescue poetry from effetery, Smith showed how to attract an audience by injecting passion, politics and – most of all – competition into the live performance of poetry.

And Smith, though no longer associated with the National Poetry Slam, has succeeded. Considering the passion displayed in West Palm Beach, both on stage and in the audience, it’s not easy to remember that only 20 years ago critics were seriously posing the question: Is poetry dead?

The grim joke among the poets gathered at the Key West Literary Seminar in 1992, for example, was that only 400 people in America read poetry – and they were all poets. That year’s seminar on the work of Elizabeth Bishop, by the way, was by far the most poorly attended in Key West history. 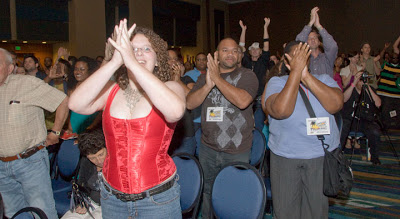 Compare that sad memory to Saturday night’s National Poetry Slam finals at the Palm Beach County Convention Center. As the four finalist teams performed, the audience of 800 expressed its enthusiasm with all the decorum of a crowd at a Miami Dolphins game, though with less public drunkenness and fewer fistfights.

As Henry Sampson, NPSI vice president said, spoken word should get most of the credit for the revival of poetry, including traditional poetry. “Hip-hop, spoken word and slam poetry all evolved separately,” Sampson said. “But they do enhance one other, and page poetry benefits, too. It’s all a great breeding ground of words and rhythm.”

The National Poetry Slam is the largest group competition in the world. It consists of teams performing three-minute poems for judges randomly selected from the audience. The judges rate each performance on a scale of one to 10 – a one is “Britney Spears,” while a 10 is “Shakespeares,” organizers helpfully explained. The crowd frequently boos any judge awarding less than a “9.” 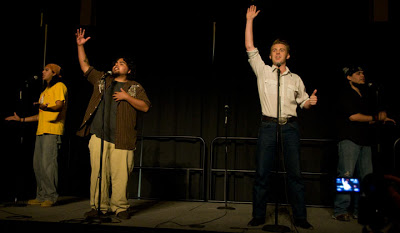 The four finalist teams, winnowed through successive rounds since Tuesday, represented New York, St. Paul, Albuquerque, and San Francisco. Saturday’s competition included group and individual performances, though no individual prizes were given. Presentations ranged widely in subject matter, from racial and sexual politics to working-class stress, school shootings and biblical themes, to lighter fare such as the plight of a seventh-grade gym teacher and a nerd-liberation manifesto.

The National Poetry Slam has grown from two teams in its first year, held in San Francisco in 1990. Performances have become more polished, too, Sampson said, and the one-time bias against published poetry has fallen away. “In the next two years you’ll see a great crossover,” he said. “We have slam poets who are getting their MFAs.”

Sierra DeMulder, a member of the St. Paul team, which took the $2,000 grand prize Saturday night, personifies that trend. Her school-shooting piece – a fierce poem of breathtaking narrative sophistication – received the highest individual score of the evening. Her first collection comes out this fall from Write Bloody Publishing.

“I appreciate what performance does, and what slam does, but I am a page poet first,” said DeMulder, a delicate 23-year-old. “Slam involves the audience, and forces you to be more accessible, to write in clearer language. People love the show, and it brings out the competitiveness in all of us.”

Chauncey Mabe, the former book editor for the Sun-Sentinel, can be reached at cmabe55@yahoo.com. Visit him on Facebook.

Film: Playwright August Wilson began his chronicle of the African-American experience throughout the … END_OF_DOCUMENT_TOKEN_TO_BE_REPLACED

Film: Just in time with the opening of movie theaters in Palm Beach County comes the season’s most … END_OF_DOCUMENT_TOKEN_TO_BE_REPLACED

Music: The very last concert Franz Joseph Haydn attended in his life was in March 1808, about a year … END_OF_DOCUMENT_TOKEN_TO_BE_REPLACED