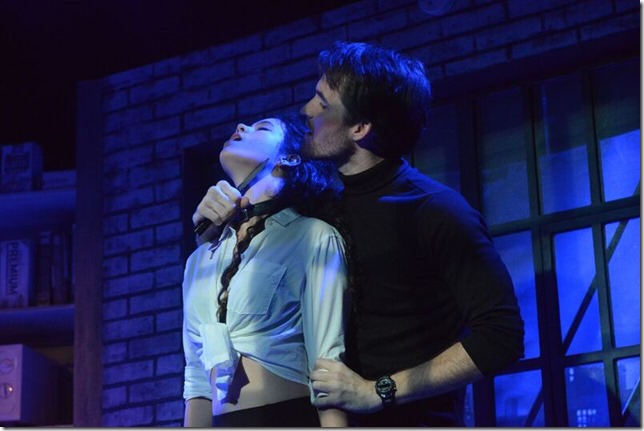 Sexual attraction can be benign, but more often than not — at least onstage — it is a prelude to a tug-of-war power skirmish. That is how it plays out in Kim Davies’ sadomasochistic Smoke, a kinky two-character tango which fittingly bookends a season that began with Sex with Strangers.

John (Clay Cartland), a 31-year-old assistant to a renowned but pretentious photographer, expects to soon be participating in the fun and games. For the moment, however, what he really needs is a smoke. Before long he is joined by Julie (Connie Fernandez), 20, a first-timer at such a soiree, but hardly a virgin.

She instantly recognizes John, for she is the photographer’s privileged daughter, which sets their power struggle into motion. Who will be tattling on whom to Daddy? And what will they be doing to each other that might be incriminating?

Before long, though, such concerns fade as they commence some mind games, potential foreplay prior to smoking-hot sex. Julie proclaims that she likes her sex rough and violent, an admission she may regret when she learns that John brings his own matched set of knives to the party.

Smoke, which premiered off-Broadway in 2014, brings to mind David Ives’s 2010 sexually charged power bout, Venus in Fur, about an auditioning actress matching wits and sexual innuendo with her potential director-playwright. Both works play with the roles of dominant and submissive, but the Ives script finds more ways to reverse matters and manages to take the theme into deeper waters.

Still, Garsson has a couple of game actors, willing to fulfill the playwright’s snarky intent. Area veteran Clay Cartland — Carbonell Award winner for the Arts Garage’s The Trouble With Doug a season ago — projects blue-collar sadism as John, a former barista with artistic aspirations, as adept with a cigarette lighter as he is with his knives.

Leggy Connie Fernandez, in her Arts Garage debut as Julie, projects naïvete about the sadomasochistic world — which may or may not be true —as her giggly schoolgirl demeanor is in distinct conflict with her yearning to be treated roughly. Fernandez does get roughed up persuasively, under the guidance of “movement safety specialist” Nic Santana.

Still, once the premise of Smoke is established, the play has little room to develop beyond the expected. As 80 intermissionless minutes, the cat-and-mouse game marks time as it slowly makes its way to its punchline conclusion. Davies knows how to draw an audience in, but ultimately its message is little more than a smokescreen.

Film: Just in time with the opening of movie theaters in Palm Beach County comes the season’s most … END_OF_DOCUMENT_TOKEN_TO_BE_REPLACED

Music: The very last concert Franz Joseph Haydn attended in his life was in March 1808, about a year … END_OF_DOCUMENT_TOKEN_TO_BE_REPLACED