Fanboys have been circling Dec. 18 on their calendars for more than a year, salivating over the arrival date of Star Wars: The Force Awakens (a/k/a Episode VII). It will surely dominate the year-end box office, no matter how much it satisfies or disappoints moviegoers. So it is OK if, like us, you are more interested in festival fare and awards fodder like Carol, Joy, The Danish Girl and The Revenant.

Here in order of release dates (which are notoriously subject to change) are the 20 fall films we are most looking forward to and a few too big to ignore.

Sicario (Sept. 18) — The title is a Spanish term, which translates to “hitman,” but maybe it should be “hitwoman” because the film concerns an assault weapon-wielding FBI agent, Kate Macer (Emily Blunt), who joins on to a shady anti-drug-cartel task force, run by a couple of suspicious characters (Josh Brolin, Benicio del Toro). Like Alice down a rabbit hole, Kate soon finds herself unmoored from the law, not knowing whom she can trust. Directed by Canadian Denis Villeneuve, this action-heavy Cannes-acclaimed film feels of the moment in our current national debate on our neighbors and borders.

The Walk (Sept. 30) — The year was 1974, and a couple of very tall New York skyscrapers that would be known as the World Trade Center were about to open. Before it could, a wiry, wily French aerialist named Phillippe Petit walked between the two towers on a tightrope, 1,350 feet in the air. The stunt was immortalized in an Oscar-winning documentary, Man on Wire, and now in a vertiginous feature film, starring Joseph Gordon-Leavitt as Petit. Do not look down.

Freeheld (Oct. 2) — One of several feature films that evolved from a documentary, this true story of a lesbian couple (Julianne Moore and Ellen Page) who are involved in a legal battle to earn domestic partner benefits in New Jersey when Moore’s character, a police officer, becomes terminally ill. In a supporting role, Steve Carrell earns attention as a flamboyant gay activist.

Legend (Oct. 2) — Ron and Reginald Kray were a couple of London gangsters in the 1960s, introduced to American audiences in a 1990 movie called The Krays. So this new film on the same subject will make you think you are seeing double, mainly because Tom Hardy now plays both brothers. Director Brian Helgeland (L.A. Confidential) is said to manage that trick without it feeling like a trick.

Steve Jobs (Oct. 9) — The co-founder of Apple and innovator of so many of the company’s electronic wonders gets the biopic treatment from director Danny Boyle (Slumdog Millionaire), with Michael Fassbender in the title role. Screenwriter Aaron Sorkin synthesized his life into a movie, so expect a lot of walking and fast talking. The film focuses on three key inventions and marketing efforts, and their effect on Jobs, his family and his health.

Bridge of Spies (Oct. 16) — The definition of Hollywood gold is a movie directed by Steven Spielberg that stars Tom Hanks. For their fourth collaboration, Hanks plays the real-life lawyer who negotiated the exchange of Francis Gary Powers, the American U-2 pilot shot down over the Soviet Union, for Russian spy Rudolf Abel (multiple Tony Award winner Mark Rylance). The Cold War drama is played for documentary-like authenticity and pulse-racing suspense, even if you remember the results of the swap attempt.

Suffragette (Oct. 23) — Some say that our national troubles began when women gained the right to vote, so here comes a film that looks back on those early 20th-century days, with Carey Mulligan and Meryl Streep as activists in the trenches fighting for voting rights. Sarah Gavron (Brick Lane) directs this period epic, a reminder that it wasn’t that long ago that women were rarely found in the director’s chair.

Our Brand Is Crisis (Oct. 30) — Politics has become a no-holds-barred contact sport and those who play the game well know how to destroy the opposition. Or they have political consultants to do their dirty work. Consultants like “Calamity” Jane Bodine (Sandra Bullock), the pit bull of a new feature based on a 2005 documentary of the same name. Bodine is lured out of retirement for a campaign in which she goes up against Billy Bob Thornton as her opposite strategist. Any similarities to the current presidential slugfest is entirely intentional.

Spectre (Nov. 6) — We do miss Daniel Craig from roles in small independent films, but he is lending such class to the James Bond franchise that the loss is mitigated. Director Sam Mendes (Skyfall) is back in this 007 genesis yarn, with double Oscar winner Christoph Waltz as the villainous head of the title crime syndicate. Add fast cars and fast women, and shake, don’t stir. 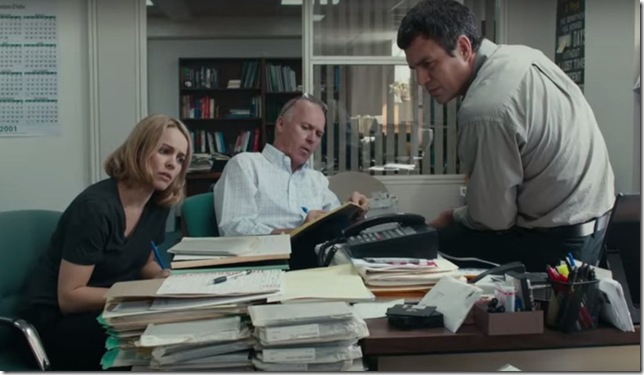 Spotlight (Nov. 6) — With his career nicely revitalized by Birdman, Michael Keaton is prominently featured — along with Rachel McAdams and Mark Ruffalo — as Boston Globe investigative reporters on the trail of child abuse allegations against the Catholic church. Writer-director Tom McCarthy (The Station Agent, The Visitor) is usually a sign of quality.

Carol (Nov. 20) — Crime novelist Patricia Highsmith focused on the 1950s crime of lesbianism in The Price of Salt, which director Todd Haynes (Far From Heaven) has brought to the screen, with the Mutt and Jeff duo of Cate Blanchett and Rooney Mara as the lovers on the lam. At Cannes this spring, Mara slinked off with the top acting prize, so Oscar voters will be watching closely.

Secret in Their Eyes (Nov. 20) — We know, we know, Hollywood remakes of foreign films are usually letdowns, but there are some intriguing changes that director Billy Ray made to this 2009 Argentine thriller that gives us hope. For starters, the district attorney heading a team investigating a brutal rape and murder is now a woman (Julia Roberts) and the victim is now her daughter. Oh, and Chiwetel Ejiofor and Nicole Kidman are along for the ride.

The Hunger Games: Mockingjay, Part 2 (Nov. 20) — This fourth movie culled from the violent futuristic novels by Suzanne Collins takes scrappy Katniss Everdeen to the Capitol for her showdown with the powers-that-be. We have long since stopped caring, but that is a minority opinion, and Jennifer Lawrence remains very watchable as the rebellion leader.

The Danish Girl (Nov. 27) — The trick in Hollywood is not how to win an Oscar, it’s choosing your next film after the victory. Eddie Redmayne (The Theory of Everything) demonstrates his versatility as the title character, Lili Elbe, the first man to successfully transition to a woman, a journey that was not without its physical and emotional challenges. Sounds like more Oscar bait to us.

Youth (Dec. 4) — Those of us who are still stunned by the exquisite visuals of Paolo Sorrentino’s Oscar-winning foreign feature, The Great Beauty, wouldn’t think of missing his follow-up film. Playing a retired composer and a formerly powerful film director respectively, Michael Caine and Harvey Keitel sift through their lives at a Swiss Alps spa.

The Lady in the Van (Dec. 11) — We are still grinning over the trailer for this reality-based tale of a dotty old woman (Maggie Smith, who else?) who parked her car in screenwriter Alan Bennett’s (The History Boys) driveway and lived in it for 15 years. Sometimes a great idea for a movie just falls in your lap.

Star Wars: The Force Awakens (Dec. 18) — J.J. Abrams is the go-to guy if you want a lucrative film franchise rebooted, as he demonstrated with Star Trek. But the fans of George Lucas’s Star Wars mythology are even more meticulous and protective. Abrams takes the saga set “long, long ago” and adds 30 years to it, a time of war and uncertainty for the Empire. They probably only have cameos, but expect audiences to explode when Harrison Ford, Mark Hamill and Carrie Fisher appear on the screen. Beyond that, Abrams and company are mum.

Joy (Dec. 25) — This one had us from the reunion of director David O. Russell (Silver Linings Playbook, American Hustle) with his favorite actors — Jennifer Lawrence, Bradley Cooper, Robert DeNiro. Lawrence plays the title character, a young woman who grows into the roles of matriarch and business mogul, heading a back-stabbing family.

Snowden (Dec. 25) — You knew a feature film on NSA whistleblower Edward Snowden had to be on the way, and the man to direct it, with all its political ambiguity, was Oliver Stone. In demand Joseph Gordon-Leavitt plays Snowden, Shailene Woodley lends support as his girlfriend. Expect a heady polemic and maybe a little espionage suspense.

The Revenant (Dec. 25) — Birdman director Alejandro G. Iñárritu spends his Academy Award capital on an even riskier film, about a 19th-century fur trapper (Leonardo DiCaprio) who gets mauled by a bear, left for dead by his fellow hunters (Tom Hardy, Domhnall Gleeson) and barely makes it back alive. Filmed on location in Calgary, Canada, if it looks bitter cold, that’s because it was.

Film: Just in time with the opening of movie theaters in Palm Beach County comes the season’s most … END_OF_DOCUMENT_TOKEN_TO_BE_REPLACED

Music: The very last concert Franz Joseph Haydn attended in his life was in March 1808, about a year … END_OF_DOCUMENT_TOKEN_TO_BE_REPLACED