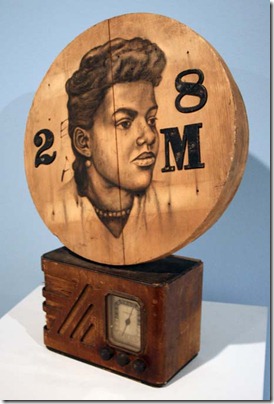 Seeing or creating art is always part of my travel plans, whether it’s visiting museums, galleries and artist studios, hearing a lecture about art or taking an art-related seminar. Packed in my carry-on without fail are a sketchbook, conté sticks and watercolors.

Late last month, I spent a week in Atlanta, where the art scene is thriving. The High Museum of Art was featuring a classical exhibit from the Louvre and Monet’s large canvases of water lilies, which I had seen before in Paris. But, like visiting an old friend, it warmed my heart to see them again. (Monet’s Water Lilies are on exhibit through Sunday, and The Louvre and the Masterpiece runs though Sept. 13.)

The National Black Arts Festival was also being held at the High, with music, vendors and a lecture and art opening featuring Whitfield Lovell. I had seen his work at Art Basel two years ago and remembered that Lovell had been awarded the MacArthur Genius Fellowship in 2007. He also was awarded the Malvina Hoffman Artist Fund Prize in 2009 at the A184th Annual Exhibition of Contemporary American Art at the National Academy Museum in New York. 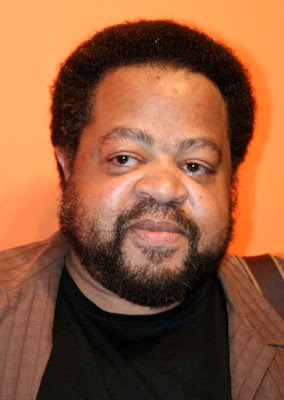 Lovell, who was born in New York in 1959, received his BFA from the Cooper Union School of Art, attended Skowhegan School of Painting and Sculpture in Maine and New York University’s graduate program in Venice, Italy. He exhibits internationally and often is a visiting artist at colleges and cultural venues. He is represented by DC Moore Gallery in New York City, and his work is in many public collections, such as the Metropolitan Museum of Art, the National Museum of American Art (Smithsonian Institution) and the Whitney Museum of American Art.

At the Atlanta event (July 30), photographer Carrie Mae Weems interviewed Lovell for an interested audience. “I am a contemporary artist commenting on issues of the past,” he said. “There’s a need in our culture to look at where we came from to know who we are as a people.”

Lovell said that he enjoys looking at good prints, woodcuts and etchings, and has been influenced by artists such as Betty Saar, Charles W. White and Jacob Lawrence. Mercy, Patience and Destiny: The Women of Whitfield Lovell’s Tableaux, co-sponsored by the Savannah College of Art and Design, is on exhibit until Sunday in the Woodruff Arts Center. 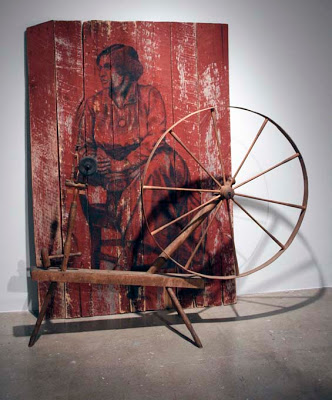 Like artists through the ages, Lovell is a visual storyteller. While his work is representational, his concept is original and runs deep through the veins of the African-American community. In large formats, he reveals the tales not told, the people that history forgot, except for remnants of their lives left in aging black- and-white photographs.

Influenced by watching his father developing and printing photographs in the family darkroom, Lovell uses his dad’s images and old photographs that he collects as reference for life-size conté, oil-stick and charcoal drawings created on tall, worn-wood planks that he finds. He then creates installations that concentrate on the period of time from the Civil War to mid-20th century by combining the images with found objects such as old radios, books, architectural elements, household goods and tools.

“The really orgasmic part of a project,” Lovell said, “is choosing the objects and seeing how they enliven the image and how the image enlivens the objects. I learned about flea markets with my grandma when I was a kid. She would buy and paint flowers on the objects.

“I choose objects that look like something my great aunt or grandma might have in their cabin. Someone used it on a daily basis, in some mundane but meaningful ritual,” he said.

In the beautifully shaded and rendered drawings, one can almost feel the spirit of each subject, as dignified faces peer out from wooden surfaces and the hands imply a gesture or feeling. Lovell’s aim is “to evoke a sense of place, to be able to feel the spirit of the past for a moment, to feel the presence of these people.”

In 28M, a disc is perched atop an old radio, while a portrait of a fashionable young woman seems ready to tap out a jazz beat. An antique spinning wheel stands in front of a drawing on red clapboards in All Things in Time. The pensive woman taking a break perhaps from her labors reminds us of the importance of patience, and that things happen in the universe’s time and not ours. 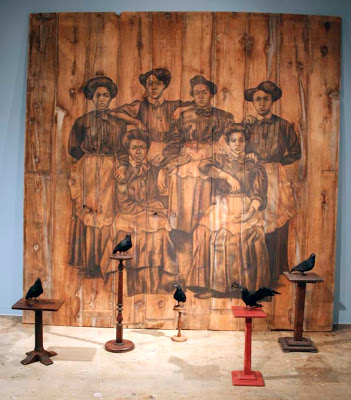 From an immense piece of wood, five women in uniforms and aprons look directly at the viewer in Servilis, a word derived from the Latin servus, which means slave or servant. Their straight posture and confident body language seem to rebel against the five stuffed black crows perched on pedestals before them. The Jim Crow laws in the South institutionalized prejudice toward the black community, but these women, who are perhaps household servants, project the strength and dignity to patiently overcome those injustices.

Whitfield Lovell’s work is not only technically excellent but gives a voice to subjects who can no longer speak for themselves.

“My work is more abstract than realistic,” Lovell said. “The concept of spirituality — that which is left behind when someone is no longer here — I am acknowledging and honoring the lives of ordinary people. I seldom make images of famous people.”

Film: Playwright August Wilson began his chronicle of the African-American experience throughout the … END_OF_DOCUMENT_TOKEN_TO_BE_REPLACED

Film: Just in time with the opening of movie theaters in Palm Beach County comes the season’s most … END_OF_DOCUMENT_TOKEN_TO_BE_REPLACED

Music: The very last concert Franz Joseph Haydn attended in his life was in March 1808, about a year … END_OF_DOCUMENT_TOKEN_TO_BE_REPLACED