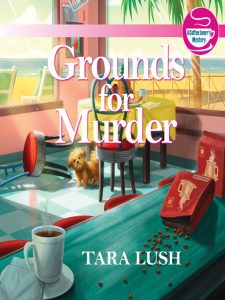 It was witnessing 13 executions at Florida State Prison that persuaded Tampa-based Associated Press reporter Tamara Lush to write romances and cozy mysteries in her free time.

“At first I considered dark police procedurals, but I get a mental break from daily crime reporting by writing something happy,” she said. Writing as “Tara Lush,” she has launched the first book in her delightful Florida mystery series, Grounds for Murder.

The plot: café owner Lana Lewis’ best— though temperamental — staffer quits without notice and goes to work for her rival, just before a statewide barista contest. Her chances of winning are creamed. Lana boils over at her ex-employee in front of a crowd. When that same java genius is found dead the next morning behind Lana’s café, she’s the prime suspect. Lana is in a latte trouble. Can she clear her name and win the championship? Or will she come to a bitter end?

As the author writes, “Who knows? I mean, it’s Florida. Who isn’t hiding something?”

This cozy, set on the fictional Gulf Coast island of Devil’s Beach, evokes the laid-back and quirky feel of a small, beachside town. There are characters such as her hippie dad, a shrimp boat captain, former sorority girls, a surfer with Mafia ties, an Italian playboy, swingers, spurned husband, jilted lovers and Stanley the puppy. Readers may enjoy the love interest, with “muscled, bronze forearms,” who happens to be the chief of police.

Lush “espressos” the funny situations with tons of puns.

Such as, “There was a time, not too long ago, that I was a hotshot journalist pursuing a Pulitzer Prize in Miami and married to a handsome network news anchor. Now, I was an aspiring latte artist on the island of Devil’s Beach, the princess of Perkatory.”

When a stranger, dressed all in black, enters the shop, Lana thinks, “Next to the soft, blue-and-white décor of my cafe, this woman stuck out like a goth in a Precious Moments shop.”

On a phone call Lana observes, “The man’s thick New York accent was the vocal equivalent of burnt coffee.”

She responds, “So I gathered.”

Other voices sound like “dark alleys,” “a CSI: Miami extra,” or “as smooth as a generic cup of Dunkin’ Donuts coffee.” By the way, Lana serves “artisan coffee” with ingredients such as flax milk and sprigs of rosemary. No K-cups.

Lana also visits local dives where she meets unsavory characters that would fit in a Carl Hiaasen caper. “That’s him. Tattoo of a machete on his left arm.”

At the same bar, Lana notes, “He scratched his jaw with the spout of his Corona bottle.”

And then the man introduces himself. “I go by three names. Like a serial killer.”

During Lush’s first year as a reporter, she got a tip that a murder suspect (who hadn’t yet been arrested for that crime) was being held at the county jail on a misdemeanor. She visited him where he admitted that he had been robbing the victim at the time. That made it a premeditated, capital crime (which the police hadn’t known.)

“He had taken a lot of PCP. I got the feeling he was extraordinarily troubled. Kind of terrifying actually,” she said. That inmate is now serving life.

Today, Lush is one of about 300 English-language writers worldwide whom the fiction website Wattpad pays to publish. Almost everyone else contribute stories for free. The site has more than 80 million readers globally, most of them teens and young women.

Lush who has dual citizenship in Canada, grew up in Santa Rosa, Calif., and Vermont. In 2000, she began work for the St. Petersburg Times and within four years was covering the state. Lush, also reported for Miami New Times and has won awards for journalism and fiction (not at the same time.)

She plotted Grounds for Murder at a coffee shop in Quebec City. Her maternal ancestors were among the first 200 French settlers of Quebec.

Cold Brew Corpse, the second book in the series, will appear within a year. In the meantime, readers can get a Devil’s Beach fix for free on Lush’s website. Her novella, Give Me Chills, is set in an ice cream truck.

I would definitely want a second helping.

Film: Playwright August Wilson began his chronicle of the African-American experience throughout the … END_OF_DOCUMENT_TOKEN_TO_BE_REPLACED

Film: Just in time with the opening of movie theaters in Palm Beach County comes the season’s most … END_OF_DOCUMENT_TOKEN_TO_BE_REPLACED

Music: The very last concert Franz Joseph Haydn attended in his life was in March 1808, about a year … END_OF_DOCUMENT_TOKEN_TO_BE_REPLACED