In an effort to attract an audience to its Festival Rep, a South Florida summertime tradition for the past 17 years, Florida Atlantic University usually includes a musical as one of its two productions performed in rotating repertory.

And the company of current theater students, recent graduates and a couple of professional guest artists often manages to pull off the musical quite well — as it does with this summer’s She Loves Me — despite the fact that the school has no musical theater training program.

In fact, if you had to choose between She Loves Me, a cult favorite musical from 1963, and The Royal Family, a classic backstage comedy from 1927, select the former.

Just two years before they would strike gold with the Jewish folk tale musical Fiddler on the Roof, composer Jerry Bock and lyricist Sheldon Harnick latched onto the Jimmy Stewart-Margaret Sullavan movie from 1939, The Shop Around the Corner, and adapted it to the stage. Although the gentle, literate show was well received on Broadway, it was soon overshadowed that season by Hello, Dolly! and Funny Girl and it closed less than nine months later.

Still, many have a special affection for She Loves Me and director Lynn McNutt’s production demonstrates why. She captures the inherent charm in the story of two Hungarian perfume shop clerks — Amalia Balash (Megan Buzzard) and Georg Nowack (Connor Padilla) — who take an instant dislike to each other, unaware that they are the secret pen pals who have long been corresponding. And like so many romantic comedies, we sense that they are ideal one another, a realization that will take them all evening.

Soprano Buzzard, who played Mary Poppins in a recent national tour, handles Amalia’s numerous forlorn solos, like “Will He Like Me?” and “Dear Friend,” as well as that virtuoso comic stream-of-consciousness aria, “Ice Cream,” in which the character suddenly realizes her affection for Georg.

She is well matched by grad student Padilla, who scores with the title tune, an equally surprised expression of his love for Amalia. Georg has already been established as an ill-at-ease dancer, but the rush of emotion in the song turns him into a giddy Gene Kelly. Padilla also impresses as the John Barrymore character in The Royal Family, making him the most-likely-to-succeed standout of this year’s acting pool.

She Loves Me is full of vivid supporting characters, who each receive a spotlight opportunity. As Sipos, the toadying clerk who fears losing his job, Joey De La Rua makes the most of his patter song, “Perspective.” The same is true of Joe Anarumo as the eager beaver delivery boy who yearns to be promoted to clerk. Emily Freeman cuts loose nicely in her 11th-hour solo, “A Trip to the Library,” and Jordan Armstrong is aptly oily as her fellow clerk and former lover, though not always on target vocally.

Barry Tarallo, the production’s other Equity performer is a welcome presence, though underutilized, as the head waiter in the first act finale café scene, as close as the intimate “She Loves Me” comes to a production number, with amusing choreography by Kate Gelabert.

Director McNutt adds in some buoyant comic business of her own, guaranteeing that this is a She Loves Me that theatergoers — those familiar with the show and first-timers — should love. 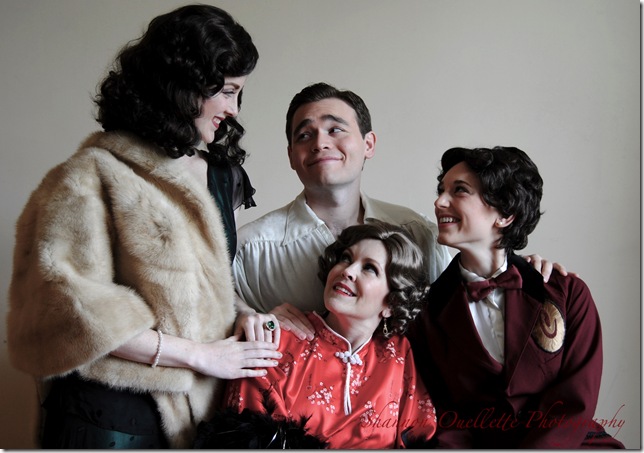 The Royal Family, a valentine to the theater by George S. Kaufman and Edna Ferber, is arguably a better piece of stagecraft than She Loves Me.

But stemming as it does from 1927, it requires more of an effort to bring alive today, a struggle at which director Jean-Louis Baldet and his cast never quite succeed. The comedy was much acclaimed originally and it has often worked in revivals since then, but it would be understandable if theatergoers at FAU were puzzled by why this work has been so admired.

The play is a none-too-veiled tribute to the Barrymores, a larger-than-life clan of thespians, most notably the brother-sister team of John and Ethel. In The Royal  Family, which takes place in the sprawling Manhattan duplex apartment of the fictional Cavendishes, Julie (Kim Connor), the Ethel stand-in, is the reigning female star of Broadway. Still, a recent reunion with a lover from years ago, now wealthy but still boring, has her contemplating retirement from the stage. Similarly, martini-swilling Tony, the John Barrymore character (Connor Padilla), is the black sheep of the family, having left the theater for stardom in Hollywood. Now besieged by reporters and process servers, he shows up in New York and also talks of trading it all for the relative anonymity of Europe.

Then there is Julie’s daughter Gwen (Brianna Handy), next in line for prominence in the family business, scheduled to star in a new play alongside her mother, unless she too opts for prosaic domesticity with her stockbroker beau. Completing the family is matriarch Fanny (Kathryn Lee Johnston), widow of a renowned Shakespearean actor and mother of Julie and Tony. All of them need to be played with over-the-top grandeur, but only Padilla manages such flourishes.

Compounding the credibility problem is the similarity of ages of the student performer pool. It is simply hard to buy that Connor is Handy’s mother. Johnston, a faculty member, is believably a generation older than Connor and Padilla, though not as old as her character is described.

Like Noël Coward’s Hay Fever, written two years before The Royal Family, it suggests that theater folk are simply different than civilians and the vast gulf between them is insurmountable. We are meant to find the excesses of the Cavendishes to be charming or at least excusable because they are artists of the stage. Alas, most of the Cavendishes here are that highly inexcusable quality — normal.

Adding to the production’s woes is the play’s bloated three-act format. Granted that audiences of 88 years ago had longer attention spans than we do today, but Kaufman and Ferber consciously dawdle early on and there are other scenes and minor characters that cry out for editing.

In addition to Padilla, scenic designer Thomas M. Shorrock is a standout in the Rep, devising a decadent residence for The Royal Family and a lavish, fold-out perfume shop for She Loves Me. Both shows are style pieces from bygone eras, but only the musical seems within the student actors’ grasp.

Film: Just in time with the opening of movie theaters in Palm Beach County comes the season’s most … END_OF_DOCUMENT_TOKEN_TO_BE_REPLACED

Music: The very last concert Franz Joseph Haydn attended in his life was in March 1808, about a year … END_OF_DOCUMENT_TOKEN_TO_BE_REPLACED