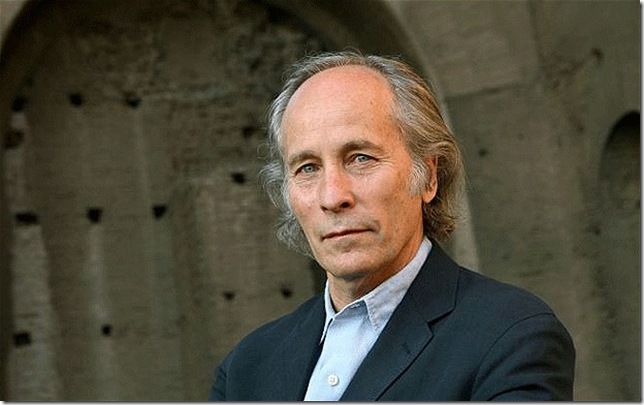 The novelist and short story writer Richard Ford lives in Maine, with a small apartment in Harlem for the two days a week he teaches at Columbia University. So of course he’s looking forward to his visit to Boca Raton on Sunday — but not for the reasons you might expect. He’s more interested in spring training baseball than in escaping the brutal weather in the Northeast.

“I’m going to Port St. Lucie to see the Mets play the Braves,” Ford says. “That in itself is reason enough to come to Florida. I love the Grapefruit League. It’s homey and not too big and not rowdy.”

A Pulitzer Prize-winner, Ford will be at the Festival of the Arts Boca to talk about his new collection of novellas, Let Me Be Frank With You. He is the first of the authors scheduled for the Festival over the next two weeks.

The other writers, in order of appearance, are Siddhartha Mukherjee, Clive Thompson, Thomas Friedman, Michael Grunwald, and Lucinda Franks. (For more information and tickets, visit festivaloftheartsboca.org.

Let Me Be Frank With You marks a return to Frank Bascombe, a New Jersey real estate agent who is the central character in three of Ford’s previous books, The Sportswriter (1986); the Pulitzer-winning Independence Day (1996); and The Lay of the Land (2006).

“It was always a pleasure to write Frank,” Ford said by phone from his home in Maine. “As an instrument Frank allowed me to get as much as I knew on the page, things funny and smart and serious.”

After Lay of the Land, Ford bid goodbye to Bascombe, saying he would write no more books about Frank. Not that he slowed down. He continued to teach, at Trinity College, Dublin, Ireland; the University of Mississippi; and now at Columbia.

Ford busied himself editing the two-volume works of Eudora Welty for the Library of America, as well as The New Granta Book of the American Short Story. In 2012 critics on both sides of the Atlantic fell all over themselves praising his novel Canada, the story of a teenage boy left on his own after his parents are arrested for bank robbery.

And yet now here we are, with a new Frank Bascombe book. For that, we can thank Hurricane Sandy.

“Sandy had a big impact on me,” says Ford, who drove to the Jersey Shore. “I was always making notes in Frank’s voice in my head, long after ‘Lay of the Land.’ The combination of New Jersey when the hurricane came ashore and Frank’s voice conspired to draw me back to Frank’s world.”

Born and raised in Mississippi, Ford has a drawl like a well-worn work glove, and he resembles an aging Huck Finn, tall and lean and a bit rugged. He has a laconic wit that might be characterized as Southern, too. But he’s never wanted to be a Southern writer.

Instead, Ford found himself drawn to write about the New Jersey suburbs when he began writing about Frank Bascombe in The Sportswriter. Originally, he says, it was a target of opportunity. It was where he lived.

“The New Jersey suburbs were a locale I knew,” Ford says. “I was tired of hearing criticisms of the suburbs. I wanted to write a paean. I write about the suburbs because we made them, our generation, and we ought to own them, not decry them.”

His attraction to the Jersey Shore was more mysterious, an innate affinity Ford felt the first time he went there. But that’s all gone now, washed away by Sandy.

“A lot of what I like about the Shore is gone, matters of habitation, history, how it looked,” Ford says. “All washed away and rebuilt. It no longer has much allure for me as a place I like to go. That’s not to say it might not fall beneath my pen again. The things I just said could be something I might want to note. I could transpose them into Frank’s voice. We’re not the same, but sometimes we coincide.”

Readers often assume Frank Bascombe is Ford’s alter ego, but that’s not the case. “People don’t confuse me with Frank once they meet me,” Ford says. “They realize Frank is a much nicer man than I am.”

Over the course of a long career, Ford has demonstrated his mastery of both the short story and the novel, winning major prizes in both categories. Ford chose the novella form for Let Me Be Frank With You simply because it was “easier,” he says.

“I had a diversity of things I wanted to write about,” Ford says. “You can have a lot of diverse material in a novel but to get it all to fit, you have to create complicated vessels. Four discrete novellas made it easy.”

Let Me Be Frank With You is also the first time Ford has written about an older man — though, he points out, a man younger than he is.

“I didn’t want this book to be about aging, but about Frank,” Ford said. “But then if you have a man who is 68 years old these things come up. I don’t feel myself at 71 that I am aging any faster than I ever was. I just feel like I’m living my life.”

Still, Ford says it’s “a bit of a head scratcher” snow that he is “always the oldest guy in the room” when he is among colleagues.

“They are thinking about things I don’t know about, using vocabularies I don’t have access to,” Ford says. “Everything I know is about another time. That doesn’t inconvenience me as a man or a citizen, but I don’t want to just write about old people. Unless I can write about them and make fun.”

Ford says age is in truth “quite funny.” He tells a story of crossing K Street in Washington, D.C., one morning, with a suitcase in one hand and a bottle of wine in the other, when the “fell smack on my face” in the middle of traffic. People rushed to help him up.

“It was hilarious,” recalls Ford, who used the scene in Let Me Be Frank With You.

Always an outdoorsman, Ford remains fit, his mind and writing abilities intact, and he has no fear of dying. But he has another fear.

“I’m the age my mother was when she died, but she had not been well for several years,” Ford says. “My father died quite young. But the only thing that really frightens me is a really long life. I have no curiosity about what it’s like to be 91.”

Film: Just in time with the opening of movie theaters in Palm Beach County comes the season’s most … END_OF_DOCUMENT_TOKEN_TO_BE_REPLACED

Music: The very last concert Franz Joseph Haydn attended in his life was in March 1808, about a year … END_OF_DOCUMENT_TOKEN_TO_BE_REPLACED