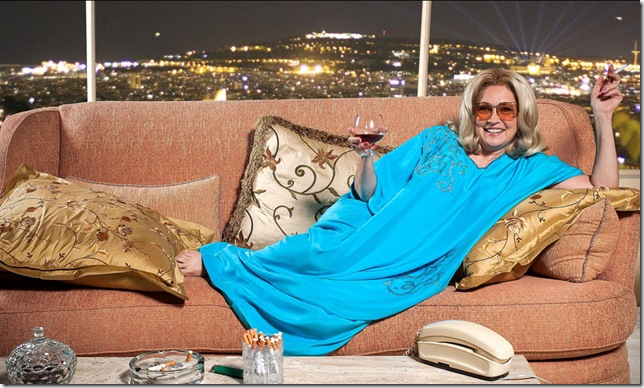 GableStage produces plays year round, so it is often hard to tell where one season ends and the next one begins. Still, it is currently easy to sense that the summer is upon us by the lightweight, albeit entertaining, fare on view at the Coral Gables playhouse through the end of the month.

The Carbonell Award-laden company usually goes in for hard-hitting, often political material, but it is offering its audience a breather from such heady waters with John Logan’s I’ll Eat You Last, subtitled A Chat with Sue Mengers. Mengers — in case you weren’t glued to Entertainment Tonight and other show biz sources during her 1970s heydays — was the self-made, foul-mouthed Hollywood superagent who gathered a corral of A-list clients and perfected (with apologies to Donald Trump) the art of the deal.

The one-woman show — it really is more of a chat than a play — opened on Broadway two years ago as a vehicle for Bette Midler, whose well-honed comic timing and sublimely coarse delivery turned the evening into a sit-down comedy routine.

At GableStage, the assignment is handled by Laura Turnbull, a capable and resourceful actress who commits fully to the role. She is almost unrecognizable under a flashy, shoulder-length blonde wig and clad in a bright blue caftan, peering out at her assembled audience through oversized, tinted glasses. Turnbull’s strength is with more substantial material, or maybe that is simply how she is usually cast, for she shows a facility for acid-laced one-liners here, while shaping the show into more of the semblance of a play.

Although there is little justification for Mengers to tell us her life story or to reel off a series of industry gossip yarns, playwright Logan does at least place the chat in a dramatic context. The year is 1981 and Mengers is on a downward spiral. After the flop of the film All Night Long, directed by Mengers’ husband, Jean-Claude Tramont, and starring two of her prime cash cows, Barbra Streisand and Gene Hackman, she has begun hemorrhaging clients. Mengers has been told to expect a call from Streisand terminating their working relationship, while others phone and drop out from attending her dinner party that night.

So what’s a gal to do but dish some dirt about the movie stars she nurtured, positioned into prominence and made so rich and famous that they can afford to stab her in the back. Chain-smoking cigarettes, plus the occasional marijuana joint, she regales us with tales of such luminaries as Ali MacGraw, Faye Dunaway, Sissy Spacek and Hackman, but it is the imminent call from Streisand that hangs like a dark cloud in the Beverly Hills sky.

Artistic director Joe Adler calls on Michael Leeds to guest direct I’ll Eat You Last — the title, by the way, refers to a fictional memoir of a cannibal and to the carnivorous ways of Mengers’ profession. It is difficult to assess the contribution of a director on a one-person show, but while Turnbull never rises from the living room couch until the final moments of the production, Leeds and his actress manage to make the 80 intermission-less minutes anything but static.

Lyle Baskin contributes a gorgeous set, dominated by an oversized, peach-colored couch, a couple of looming Corinthian columns and a wide-screen picture window that overlooks Hollywood. And thanks to Jeff Quinn’s lighting design, the cityscape darkens as night — and Mengers’ fate — descends. But Turnbull remains triumphant throughout the evening, commanding us eventually to leave in bluntly coarse language and exiting to ready herself for dinner, even if she will be eating alone.

Film: Playwright August Wilson began his chronicle of the African-American experience throughout the … END_OF_DOCUMENT_TOKEN_TO_BE_REPLACED

Film: Just in time with the opening of movie theaters in Palm Beach County comes the season’s most … END_OF_DOCUMENT_TOKEN_TO_BE_REPLACED

Music: The very last concert Franz Joseph Haydn attended in his life was in March 1808, about a year … END_OF_DOCUMENT_TOKEN_TO_BE_REPLACED