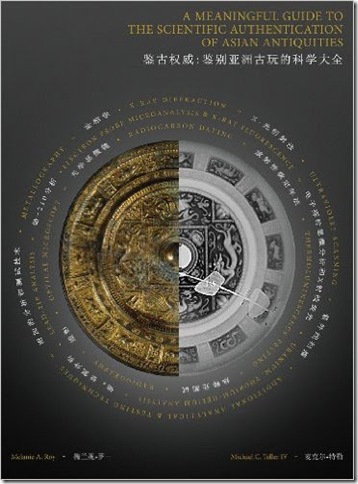 A Meaningful Guide to the Scientific Authentication of Asian Antiquities, by Michael C. Teller IV.

Art is the visual narrative of history and there is a lot to learn at the Palm Beach Jewelry, Art and Antique Show now running at the Convention Center in West Palm Beach. There are exhibitors who are not only displaying the finest examples of the moments on the timeline, but they are so knowledgeable about their subjects — and so willing to share that knowledge — that lessons learned are certainly as valuable as the objects themselves.

It is a delight in so many ways, even if getting there and navigating the show is agony.

From Michael C. Teller IV, the suave, well-suited gentleman with perfect teeth at the helm of his TK Asian Antiquities with a shop on East 57th Street in New York and a 7-acre estate for authentication, research, conservation and restoration in Williamsburg, Va., I learned how to date ancient gold through the complexities of chemistry of trace minerals and atoms.

Teller is the author of A Meaningful Guide to the Scientific Authentication of Asian Antiquities, a handsome bilingual volume he described as the only “functional guide” to the subject and his portfolio of ancient gold pieces dating back to the 5th century B.C., as well as seemingly priceless objects of Asian art is a study in stylishness.

An erudite man, well-versed in theoretical physics and philosophy, but not the least bit stuffy or pedantic, he is not without an impish sense of humor. Talking of exploring temples in jungles “brings out the kid” in him. He took obvious pride in showing me around his treasures, explaining how this developed from that and taking me into his confidence. I felt as though I were being initiated in a special order of explorers, Illuminati and archiometry. His spirit is contagious; even Robert Connors, who described himself as chief framer and truck driver, was a pleasure to talk with.

Next door, the signature jewels of Yafa sparkled and flashed, lighting up the entire corridor. Sadly, for me, they were so busy accommodating customers no one had time to chat with me, but at Yvel, where I was drawn to the vitrines of baroque pearls and slivers of smoky quartz enrobed in gold, I found U.S. sales manager Daniel Sahalo, a willing young man with a winning smile and easy manner. In the meantime, designer Isaac Levy, who heads the eponymous (spelled backwards) Israeli concern, was tempting a white-haired dowager with rings and bracelets and earrings with pearls big enough to bend time and space was indefatigable. Finally, the woman found a ring to suit her low-key sense of gravitational waves, saying, “I could wear this to Publix.”

Not in my Publix.

Amusing as that was, I was more interested in Sahalo’s story of their Megemeria project, emanating from a design school Yvel started in Israel in which Ethiopian immigrants like himself (“I didn’t know there were white Jews,” he said, laughing) learned to craft a collection that adroitly mingled modern and ancient, the religious with the ethnic, in clever and pleasing combinations with inscriptions in Hebrew and Amharic.

Stopping at Valerio Art Deco, the Coral Gables home of opulent design in furniture and sculpture, I admired the glow of the French furniture, but to call it furniture would be like calling a lion Hello Kitty. Gallery Director Waltford Gonzalez explained that the owner, Antonio Valerio, had been collecting work since the 1970s. Everything gleamed. I tried out my limited knowledge of finishes, dropping a term I’d heard from my cousin Craig — who is the area’s leading conservator and restorer and could give Teller a run for his money in scoping out methods and material of objets d’art — offhandedly mentioning “French polish.”

I was properly admonished by Gonzalez: this gleam was lacquer, considerable more high sheen and “not as dull as French polish.”

Viscous chagrin dripped down my face. That’s why journalists should just listen instead of narcissistic punditizing and predicting the winner of political debates.

I was very impressed with the genteel manner of the learned Michael Pashby and his stunning collection of fine English antique chairs in rare wood and inlaid brass. Dating back to French Revolution days, they were affixed to the wall like dimensional paintings. I heard a passer-by sniff and snark “those chairs are probably $75,” but no, Pashby, unfazed, politely folded his dark-rimmed spectacles and pointed out the intricate brasswork, partie and contrapartie of superb quality and the finely drawn, pencil-thin parallel lines along the legs. I sat in a chair (not on the wall) and found it sturdy and comfortable enough for a cuppa and snooze.

As always, Holden Luntz showed some new and stunning selections from his tasteful collection of contemporary photographs. I am always glad to see him and know I can count on a new view of something from the urbane to the ordinary, but rendered in extraordinary fashion. I was particularly struck by Harry Benson’s candid portrait of a beautifully melancholy Bianca Jagger with enigmatic Andy Warhol photo-bombing in the background and some other fine pictures. 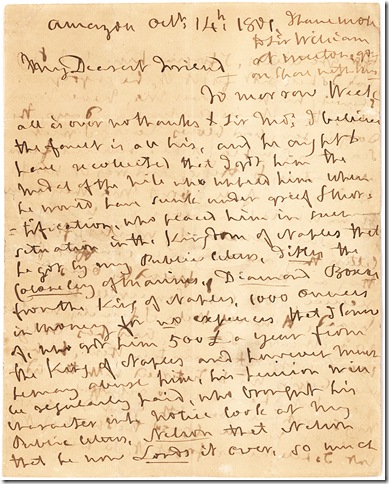 A letter from Horatio, Lord Nelson, to his mistress Emma, Lady Hamilton, written aboard the Amazon on Oct. 14, 1801. (Lion Heart Autographs, New York)

David Lowenhertz piqued my curiosity with a typed and hand signed letter from Theodore Roosevelt to a lesser-known nephew of Robert. E Lee, Fitzhugh, requesting the general’s autograph for his collection. Lowenhertz, chief scribe collector of Lion Heart Autographs in New York, indulged my personal interest in old guys’ letters by showing me a marriage contract signed by that happy couple of witnesses Napoleon and Josephine and a scratchy letter from Lord Nelson, to his mistress, Emma, Lady Hamilton, cribbed out in his left hand (he lost his right arm in the battle of Santa Cruz de Tenerife, returning to work a half-hour after amputation, it is said) and signing it “in half-sea sickness.”

“He got seasick, you know,” smiled Lowenhertz of the admired lord of the seas.” A nice bit of historical tabloidal gossip.

Karin Hudson was at the show for the first time with a very fine, very smoothly painted group of portraits by Ross R Rossin, whom she represents in her gallery. She described the artist as a Bulgarian who’s been painting since he was 6 and mainly does commissions from CEO and various titans. He has, she pointed out, four pictures in the Smithsonian National Portrait Gallery and his vision of Maya Angelou has been adopted as a postage stamp. I was particularly taken with a very charming portrait of his daughter because it had the depth of European lighting and a bit of Slavic flare.

Julia Santen had a superb collection of original posters and we discussed how the zeitgeist seemed to make the market. Chéret wasn’t selling, which disturbed me since he practically invented the modern form. His stuff was so coveted that le tout Paris used to come out at night and tear it off the walls before the glue dried. Alas, so goes the graphics of the late 19th century.

On the way out, I stopped by the Galerie Fledermaus (Chicago) exhibit because I am a great admirer of the work of the time, of Schiele and Klimt and the Vienna gang. Two graceful Chinese paintings caught my eye at Colm Rowan’s exhibit. One, he said, was finished just 10 days earlier. I would have been glad to watch the paint dry on that one. The two paintings had that curious flatness typical of Chinese work, yet seemed so complete alive.

At the beginning of this piece, I said the show was both delight and agony. Parking is improbable — even vendors complained to me about getting their trucks in — and I surrendered to preview-party traffic and left after waiting in a line of honking horns one hour on Okeechobee Boulevard. West Palm Beach Police are discourteous, incompetent as traffic directors, and unavailable for assistance; Convention Center security personnel are rude; show entrance staff are uninformed; the show started on a Wednesday (more vendor complaints); show management staff cavalier; the booth layout higgledy-piggledy; the show map would make Mercator cry; signage is illegible, etc.

The burden of this hot mess falls squarely on the shoulders of the Palm Beach Show Group.

I am being kind.

But go, if you think you can survive an Army Ranger obstacle course. It will be worth it.

Film: Playwright August Wilson began his chronicle of the African-American experience throughout the … END_OF_DOCUMENT_TOKEN_TO_BE_REPLACED

Film: Just in time with the opening of movie theaters in Palm Beach County comes the season’s most … END_OF_DOCUMENT_TOKEN_TO_BE_REPLACED

Music: The very last concert Franz Joseph Haydn attended in his life was in March 1808, about a year … END_OF_DOCUMENT_TOKEN_TO_BE_REPLACED