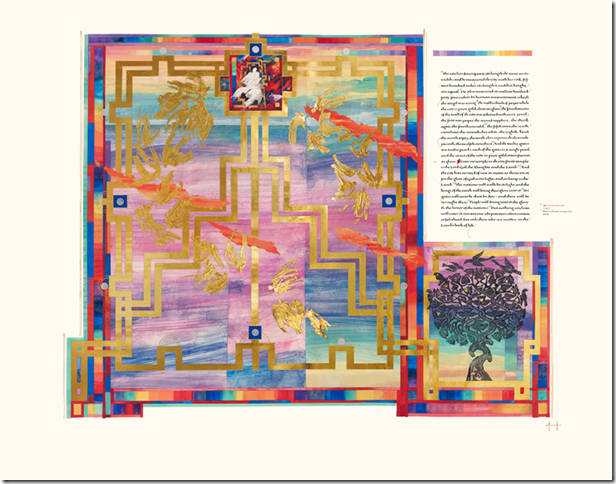 If Hollywood can bring us a Noah with special effects, monks should be able to bring us a radiantly abstract Bible. And that’s exactly what they have done.

After 15 years, elegantly crafted pages of gigantic size and glowing imagery are spreading the light. As far as the message goes, time will tell.

The Saint John’s Bible is the first illuminated handwritten Bible to be commissioned by a Benedictine monastery in 500 years. It contains more than 1,000 pages with more than 160 artworks illuminated by 24-karat gold leaf, silver leaf and platinum. On display at The Society of the Four Arts are 68 of those pages. The birth, baptism and resurrection passages are absent but there is so much to look at one does not miss them.

Adam and Eve are represented as an African man and woman with body painting in an illumination from 2003. Patterned fabrics from various ancient cultures surround the couple, who appear inside a decorative frame featuring African tapestry patterns and a Peruvian feather cape. There is a touch of Middle Eastern textiles on the horizontal stripes and a coral snake poses as Satan. The gold bar framing is there to remind us of God’s presence in our life.

Creation: Genesis Frontispiece uses seven vertical strips representing each one day and small golden squares arranged in sequences of seven. Here, gold symbolizes God’s hand in the middle of chaos and his shaping of the universe. The telescopic view of the cosmos is one of many modern references found in the exhibit. Day four brings us the sun and moon while day five welcomes birds and emerging ocean life. Humankind enters the picture in day six and its representation was inspired by early cave paintings in Nigeria.

A female hunter holding a bow appears against a background of a volcanic eruption, which speaks to the unpredictable nature of our existence.

With its many faces of diversity, universal symbols and modern-world references, the project’s message of acceptance and unity should be an easy one to grasp. 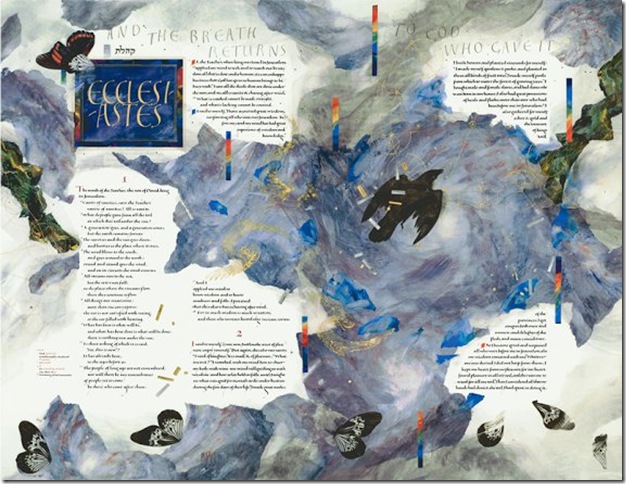 Take Genealogy of Jesus: Matthew Frontispiece, which features the image of a menorah and concentric circles around an inner core. The mandala-like cosmic image here should seem familiar to several religions and the gilded intricate stamps resemble illuminations from the Koran. The inclusion of these independent symbols in one image reminds us that we are all related and not so different after all.

Accompanying the pages are tools, sketches and rare books that explain how this Bible came to be.

There was no automatic-enhancement tool to click, although modern technology did its part. The community of Saint John’s Abbey and University in Collegeville, Minn., began planning and working on the project in 1995. The task of creating it was directed by a committee of theologians, artists and scholars. The words were handwritten on vellum (calfskin) using hand-cut quills from turkey, swan and goose feathers and ancient inks derived from natural minerals and stones such as lapis lazuli, malachite and vermilion. It took a team of 23 professional scribes working in a Wales-based scriptorium under the artistic direction of Donald Jackson, senior scribe to Her Majesty Queen Elizabeth’s Crown Office. The theological work was done at Saint John’s University.

All 73 books of the Old and New Testaments are presented in seven volumes using the New Revised Standard Version (NRSV) translation. According to the website, this translation was chosen for its theological accuracy and because its predecessor (the Revised Standard Version) is authorized for use by most Christian churches: Protestant, Anglican, Roman Catholic and Eastern Orthodox.

Though the pages are complete, the Bible remains unbound.

Throughout the exhibition, one notices the imagery often turns to modern events to update ancient content and the divine is rarely represented in literal form.

The 2002 illumination To The Ends Of The Earth brings back that striking image of the cosmos; this time in ultramarine blue. It is a vision of earth as seen from space. This is a special page that completes the volume containing the four Gospels and the Acts of the Apostles.

Strands of DNA appear woven into the Genealogy of Christ illumination while Wisdom Woman features the 28 phases of the moon, and paintings modeled after images from the Hubble telescope. The New York twin towers are said to appear in Luke’s parables, but I did not find this particular page in the show.

A woman’s conflicting emotions divide her face in half. This is the Esther illumination (2010) which speaks to the duality of Esther as a faithful Jewish woman and a powerful queen. In this particular painting, Esther resembles Gustav Klimt’s women. One minute she seems confident, and the next minute, insecure. 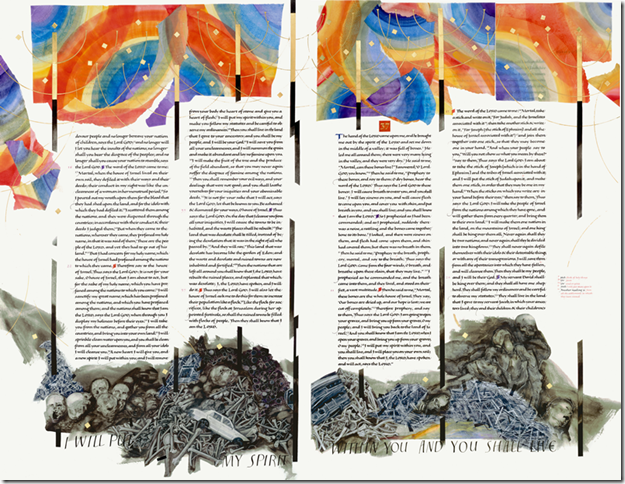 Valley of the Dry Bones includes rainbows, which are the traditional symbols of God’s promise to Noah. In this rendering, Jackson paints Ezekiel’s vision using Holocaust-like imagery such as abandoned eye-glasses and a graveyard. Another hint of our times is the smashed windows appearing as the aftermath of terrorism.

The exhibit, along with 19 photos by Tony O’Brien of his year’s residency at a Benedictine monastery near Santa Fe, N.M., called Light in the Desert, runs through April 23.

Its timing is somewhat perfect. At a time when headlines tell of a bus-riding Pope who is trying to redefine his church and ground the priests and cardinals’ egos — a task that might take longer than what it took to put this book together — we get a Bible elevated to modern times and less fixated on the past.

I am not a very religious person, but I enjoy looking at gorgeous products resulting from good skills. This is a project with high artistic merit. The reason given for its origin, however, is less-unique and sounds pretty much as what everybody else in the world is trying to do: retain a younger audience.

“The project was conceived as an expression of faith relevant to the modern world. It is a visual record of a new generation’s perception and artistic interpretation of an age-old historical and literary document,” reads one wall panel.

The world hears/understands the newer generations’ need for fierce, enhanced versions of everything old and tries desperately to satisfy it. It really is a very nice gesture. I just hope the coming generations never find out that the trigger to a beautiful monumental endeavor like this one is their inability to digest anything in its pure original form. Imagine their demands, if they figured it out.

Film: Playwright August Wilson began his chronicle of the African-American experience throughout the … END_OF_DOCUMENT_TOKEN_TO_BE_REPLACED

Film: Just in time with the opening of movie theaters in Palm Beach County comes the season’s most … END_OF_DOCUMENT_TOKEN_TO_BE_REPLACED

Music: The very last concert Franz Joseph Haydn attended in his life was in March 1808, about a year … END_OF_DOCUMENT_TOKEN_TO_BE_REPLACED