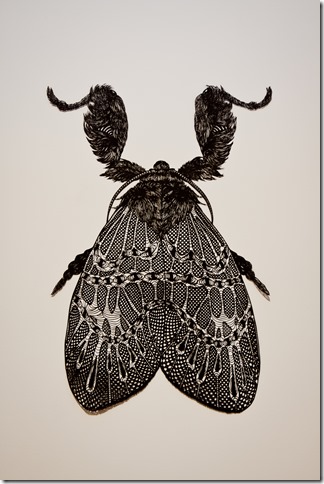 From the Moth series, by Hiromi Moneyhun.

Solo art shows don’t often turn out to be as good as they are advertised. In the case of Shadows of the Floating World, it is something to be seen to be believed — and even then, we don’t believe our eyes.

Celebrating the art of papercutting (kiri-e) now through Sept. 18, the Morikami Museum is showcasing about 22 pieces masterfully created by Jacksonville-based artist Hiromi Moneyhun. The exhibition focuses on cultural perceptions of female beauty in traditional Japanese society and other tribal cultures.

Moneyhun’s shows usually involve new work, but this time it was simply a matter of choosing what pieces to include, which was “a lot of fun,” the artist said via email.

The ones selected were created between 2013 and 2016, drawn free-hand with a black pen and painstakingly cut with an X-acto knife. Depending on the size, completion can take from a week to more than month. Viewed from the walls, the seemingly simple designs become fleshier, fuller and alive.

Her husband, Roy Moneyhun, has a habit of asking people at her shows if they have seen anything like his wife’s art. 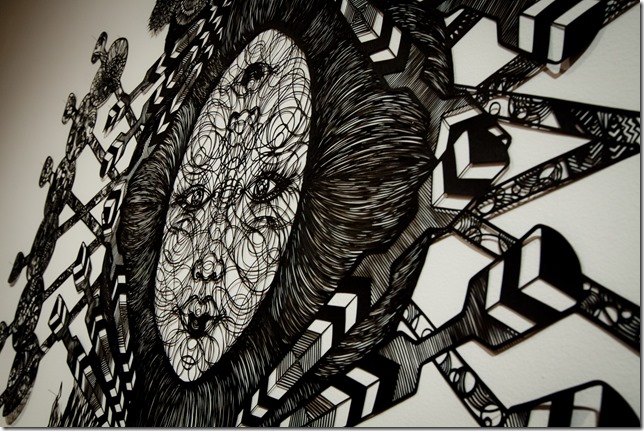 Detail of a papercut by Hiromi Moneyhun.

As if preparing us for the kinetic effect of the bigger and more elaborate ones, the first gallery room greets us with a series of black moths featuring different cut-out patterns. Their shadows on the walls enhance the drama and help the creatures come to life. One look at their lacy wings and we realize this is a one-of-a-kind art delivered by very steady hands. The Moths series explores the concept of metamorphosis and adaptation, which interested the self-taught artist early on.

It might not be well known in the west, but Japan traditionally used kiri-e to decorate its Shinto shrines and later on for book and newspaper illustrations. As a child in Kyoto, Japan, Moneyhun was captivated by the paper-cut illustrations in Japanese children’s books. At some point, she even tried a bit of tattooing.

It wasn’t until 2004, while looking after her mother-in-law, that the artist’s unique papercutting style flourished with incredible graphic precision and bold imagination. Part of her inspiration comes from the graphic quality of woodblock prints that captured the “floating world,” which refers to the life and customs of brothels and entertainment districts of the Edo period. Now, Moneyhun hopes viewers gain a true appreciation for this craft. 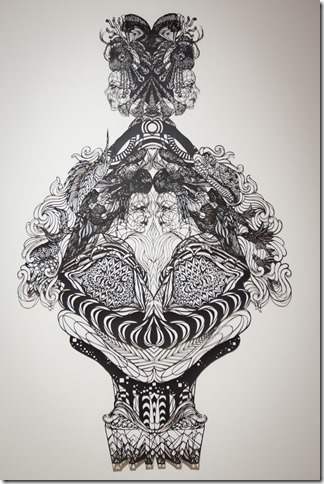 A papercut by Hiromi Moneyhun.

At her command, paper becomes hair, fabric, and feathers, as can be observed in Kimono. This work, featuring playful geometric shapes framed by thin and bold lines that turn and fold, is one of several celebrating the high-fashion courtesans of Japan’s 18th and 19th centuries. It also projects that illusion of depth the artist’s designs are known for.

The overwhelming attention she received on opening night should have been no surprise.

Aware of its rich intricacy, another work, titled Ocean, challenges us to spot all the sea creatures hidden in it. Octopus? Swordfish? This one, too, is deliberately calculative and overwhelming with details. Ocean wins. We give up. 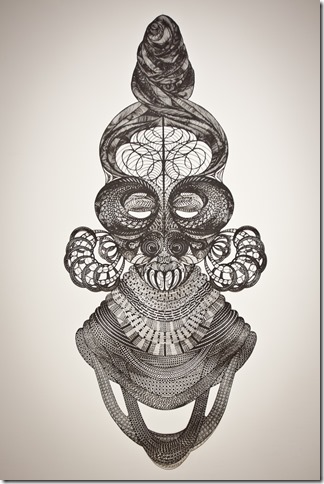 The last gallery room is dedicated to the Tribal series, in which Moneyhun shifts away from the traditional Japanese motifs and moves on to other parts of the world. Here we meet the extensively decorated female faces of the Mursi (southwestern Ethiopia), the Kayapo (Brazil), the Apatani of Arunachal Pradesh (India), and the Chin (northwestern Burma). They resemble masks more than human faces.

Commenting on the serious psychological trapping effect physical layers of ornamentation have on these women, this is perhaps the most serious – if not critical — part of the show. The message, however, surrenders to the outstanding creativity displayed. The beautiful execution of the necklaces, bracelets and piercings enslaving the female figures is precisely what makes this room the most exquisite part of Floating World.

Did we mention everything is drawn free-hand?

Shadows of the Floating World runs through Sept. 18 at the Morikami Musuem and Japanese Gardens west of Delray Beach. Tickets: $15, $13 for seniors, $9 for children and college students. Open 10 a.m. to 5 p.m. Tuesdays through Sundays. Call 495-0233 or visit www.morikami.org.

Film: Playwright August Wilson began his chronicle of the African-American experience throughout the … END_OF_DOCUMENT_TOKEN_TO_BE_REPLACED

Film: Just in time with the opening of movie theaters in Palm Beach County comes the season’s most … END_OF_DOCUMENT_TOKEN_TO_BE_REPLACED

Music: The very last concert Franz Joseph Haydn attended in his life was in March 1808, about a year … END_OF_DOCUMENT_TOKEN_TO_BE_REPLACED