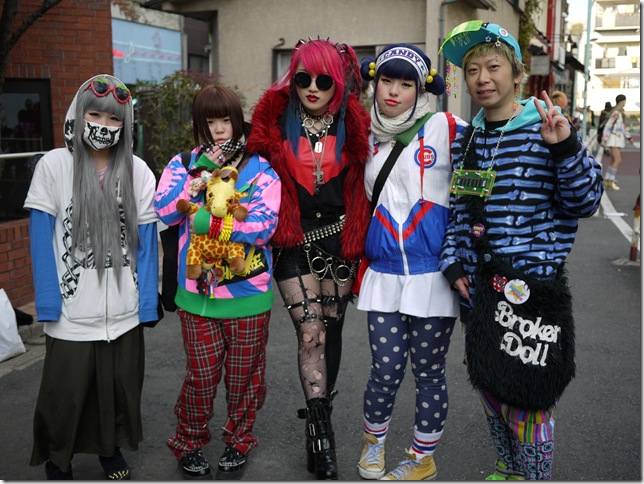 Japan’s street fashion knows no minimalism. Like a rainbow rhapsody, its tune says anything goes and more is always better. An ongoing exhibit wrapping up next month tells us it is all about gaining acceptance, not attention.

There is no room for judgment and the main goal is having fun. These are some of the notions the Morikami Museum galleries put forward with Breaking Boundaries: Contemporary Street Fashion in Japan. The exhibit gives us a taste of the major fashion subgroups that have emerged through the years and continue to evolve on the streets of Japan.

The outfits on display through Feb. 23 represent some of these groups, including Gothic-Lolita, Punk-Lolita, Kogal and Rockabilly, and showcase the nation’s street dance between innocence and sexy, old and modern.

Forget everything you know about the Japanese woman: porcelain white skin, straight black hair. Pair a short pleated skirt with a white blouse under an oversized vest or cardigan and you would come close to the Kogal style: the school girl uniform. This outfit is the new kimono.

For a while now, it has been an instant symbol of contemporary Japan. White socks held up by glue and penny loafers complete the look, which emerged in the mid-1990s. At first, Kogal girls would tan their faces and bleach their hair, but recently there has been a return to the roots. Tanning is out and bihaku (white face) is in. Also, white socks have been replaced by dark knee-high socks.

In the same gallery room we encounter three innocent-looking ensembles in pastel tones featuring ribbons, lace and fairytale themes. A frill jumper revives the Swan Lake story with an enchanted landscape that seems taken right out of a ballet production, albeit with at least one license taken. The dreamy scene includes a castle, a horse carriage and a group of swans floating on a serene blue lake. A pair of white swans faces each other forming a heart-shaped silhouette. They both wear a golden crown, which is a departure from the original Russian tale, where the prince never turns into a swan. The scene is very romantic. 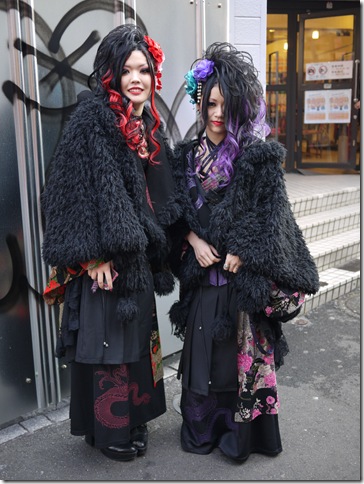 Another storybook reference you will find here on a skirt is Lewis Carroll’s Alice’s Adventures in Wonderland. Alice, the white rabbit and the queen are paired with swords and crossed sabers while surrounded by a rose briar in what is known as the Alice and the Pirates line of the Baby, the Stars Shine Bright brand.

These allusions to Victorian children’s literature combined with dolls and cuddly bears are all characteristics of Sweet Lolita designs, which is the earliest and the most recognizable of the Lolita looks. It grew very popular with the birth of boutique chains and popular films such as Kamikaze Girls. While in Western culture the name “Lolita” carries a connotation of sex and pedophilia (from Vladimir Nabokov’s novel), in Japanese culture, Lolita refers to cuteness and elegance, not necessarily romantic attraction.

Gothic Lolitas and Punk Lolitas are equally concerned with innocence and cuteness but much edgier. The 1980s British gothic rock scene and the androgyny of personalities such as David Bowie are said to have inspired the look. Borrowing inspiration from Madame Pompadour’s Rococo fashion style, a black velvet outfit titled Julieta One Piece features a square neck, minimal trimmings and large cuffed sleeves. This is by the Atelier Boz brand.

Of all of them, Punk Lolita is the closest to resemble British street culture. Wild haircuts, bondage trousers and in-your-face T-shirts accompany chains, spikes and safety pins while complementary ornaments, such as tea cups, world spheres and vintage suitcases soften the look.

No matter the color of their clothes, Lolitas are immediately recognizable by their doll-like makeup, frilly skirts, ribbons and lace. 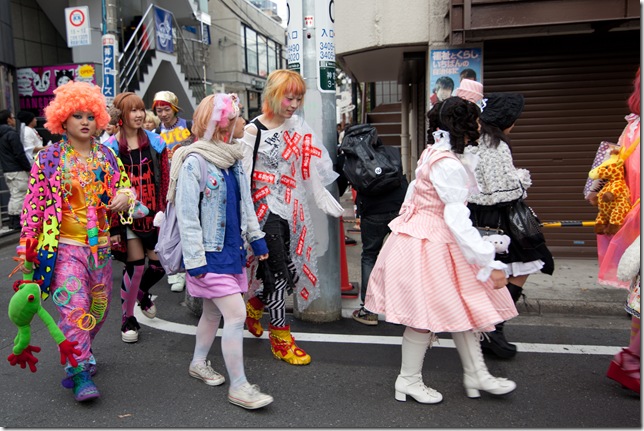 A second room contains a huge collage of photos taken during Tokyo’s Harajuku Fashion Walk, which takes place four times a year and attracts all kinds of colorful innovative styles. Think Halloween, except there is no discernible character here. The stars of this walk could all end up in a worst-dressed list or What Not To Wear, except such a list and such a TV show have no place here. The event is all about tolerance, respect and freedom of expression.

Although it may seem like a show about a Japan gone all materialistic, Breaking Boundaries is more about showing the exciting blend of traditional dress and innovative modernity kids are coming up with today. It is not rare to see all of the following worn by one person: a Cookie Monster cellphone holder, a Hello Kitty doll, kiddy-size hair clips, a lace mini hat and a kimono with a modern twist.

At first glance, there do not seem to be rules to any of these fashion movements. They all look a bit messy, chaotic. Little by little, the exhibit reveals each of them is indeed stylistically defined, although those rules, too, are rapidly fading. Existing fashions have begun fusing or mixing elements from others to create entirely new ones. There is a lot of mix and match going around.

In the end, I do not know if I buy the whole we don’t want attention tune, but one thing is certain, at the core of Japan’s street wear is the idea of not taking oneself too seriously. We can always use a reminder.

Film: Playwright August Wilson began his chronicle of the African-American experience throughout the … END_OF_DOCUMENT_TOKEN_TO_BE_REPLACED

Film: Just in time with the opening of movie theaters in Palm Beach County comes the season’s most … END_OF_DOCUMENT_TOKEN_TO_BE_REPLACED

Music: The very last concert Franz Joseph Haydn attended in his life was in March 1808, about a year … END_OF_DOCUMENT_TOKEN_TO_BE_REPLACED