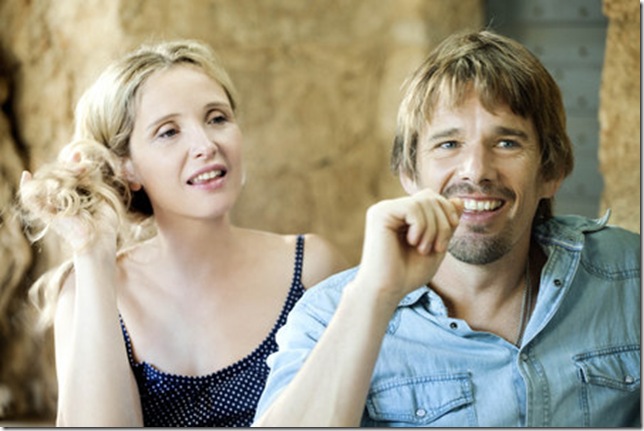 Richard Linklater’s Before Midnight opens on a scene to which any divorced parent who received the short end of the custody stick can relate: the desire to stretch out precious time with one’s children before they inevitably vanish into the arms of that other person you used to love.

In Before Sunset, the second film in what has become a trilogy shot in nine-year, real-time intervals, we learned that Ethan Hawke’s Jesse had married another woman and reared a child in the years between his first, fairy-tale evening with Celine (Julie Delpy) in 1994’s Before Sunrise. In Before Midnight, we meet the boy, Hank (Seamus Davey-Fitzpatrick), in a Greek airport as his father is about to send him back to Chicago, where he lives with his mother.

Just as in the nine years between Sunrise and Sunset, a lot has happened in the past decade: Jesse is now divorced from his first wife and is devoted full-time to Celine, and the bright, pragmatic Hank is caught in the middle of this arrangement. After a summer sojourn in Greece with his son, Jesse clearly doesn’t want to see him board that jet. He protracts their farewell as long as humanly possible, the way parents do when they’re marooning their children in a college dorm room for the first time. He doesn’t want to relinquish the moment to the inexorable passage of time.

As in the previous two films, time is of the essence, and it’s also the essence, of Before Midnight. But unlike the other two, it doesn’t seem like they’re wrestling with a deadline. They’re less inclined to unspool emotions while racing against a clock. This time, Jesse and Celine are more stable than they’ve ever been; it’s revealed early on that their encounter at the end of Sunset led to a lost weekend of forbidden coitus and eventually a full-blown relationship. They now have twin girls of their own. He’s still a successful writer pulling from their relationship for his best-selling fiction, and she runs the house while trying to pursue her career in sociopolitical activism. Clearly, they’re comfortable enough to afford six weeks in Greece with attractive, compelling friends.

So why is it that the most symbolic scene in Before Midnight finds Jesse and Celine watching a sunset slowly plummet beyond the mountains, poetically trying to retain it before its elliptical descent? There’s a desperation in their unspoken desire to freeze time, to not acquiesce to the ephemeral nature of life, as referenced earlier in the film by an older houseguest who has lost her husband: “We appear and disappear,” she says, capping a monologue that leaves their chatty dining table speechless for a moment.

Later, Jesse, hoping to salvage a drawn-out fight, jokes in his adolescent way that he’s really a traveler from a time machine, that he’s seen the future and is reporting back that everything would be OK. There’s comfort in the past and future, but the present generates sheer panic and bracing uncertainty. This is what happens when a pair of passionate, living-in-the-moment nights a long time ago face the harsh light of everyday reality, with its struggles, responsibilities, jealousies and resentments. It’s enough for anybody to want to push fast-forward or rewind.

Linklater is a brilliant enough director to couch these deep and heavy themes in the agreeable touch of naturalistic comedy. Like its previous, largely improvised predecessors, Before Midnight is as funny as it as human and humane. “When was the last time we wandered around bullshitting like this?” asks Jesse as he and Celine meander through historical Greek monuments, discussing themselves, gender differences, dreams and the past. It’s a comic line that self-consciously references what both the admirers and the few detractors of this series have: that it’s a lot of talking about nothing.

The movie is comprised largely of five or six lengthy conservations over the span of a day, and in the process, Jesse, Celine and their friends capture the rhythms and cadences of real-life dialogue in a way that few films have before, transitioning from thoughtful discussions of our increasingly automated society to unspoken male and female desire and ambition. But it’s only through this fascinating static that pictures of pure, unfettered truth emerge, and when they do, the film becomes an uncomfortable, therapeutic mirror to emotions and thoughts we’ve all felt.

I’ve said plenty about the extraordinary results of Linklater and his cast’s collaborative writing process; Hawke and Delpy understand their characters so innately that it’s as if no time passed between shooting these films. Their actions and diction remain remarkably consistent with the same aimless Gen-Xers who met on that train in 1994. What’s less immediately celebratory is Linklater’s direction. He films his protagonists with the invisibility of a gracious champion, evidence that sometimes it takes a great director to conduct scenes of such ostensible directionlessness.

Still, for those looking for it, his style is apparent, and no less brilliant: When Jesse and Celine are on the same page, Linklater’s editing patterns capture them in seemingly endless two-shots, rarely cutting away and always keeping them in the frame together. When they fight, Linklater increases his edits and isolates them in separate frames, subtly reflecting their fracture in his very form.

If forced at gunpoint to select the best film in this series, I would still go with Before Sunset, in large part because of its exquisite open ending. A little bit of that film’s write-your-own magic dissipates with the sheer existence of Before Midnight. But as far as threequels go, this is one of the few truly outstanding third ventures in any franchise. It’s about time.

Film: Playwright August Wilson began his chronicle of the African-American experience throughout the … END_OF_DOCUMENT_TOKEN_TO_BE_REPLACED

Film: Just in time with the opening of movie theaters in Palm Beach County comes the season’s most … END_OF_DOCUMENT_TOKEN_TO_BE_REPLACED

Music: The very last concert Franz Joseph Haydn attended in his life was in March 1808, about a year … END_OF_DOCUMENT_TOKEN_TO_BE_REPLACED