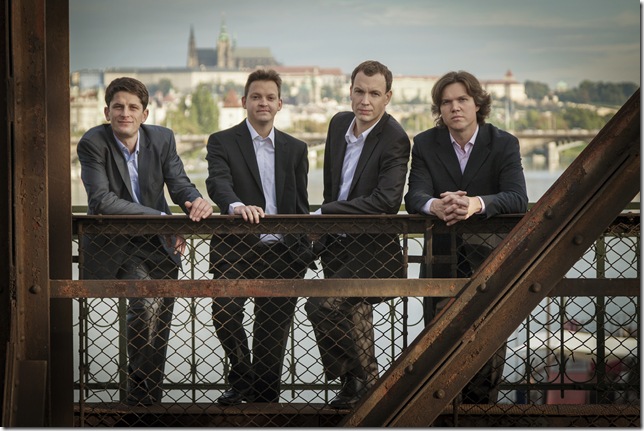 Editor’s note: The publication of this review, which was scheduled for the week of Feb. 21, was delayed by technical problems.

In a program at the Flagler Museum on Feb. 23, the Bennewitz Quartet played two pieces by Czech composers Jan Dussek and Erwin Schulhoff. After intermission came a late Schubert composition from the spring of 1826.

In his opening remarks John Blades, the retiring executive director of the Flagler Museum after 20 years’ service, said nine excerpts from this year’s concerts had been broadcast on PBS’s Performance Today. And in its 17-year existence, the Flagler Music Series had duplicated only six items in over 80-plus concerts. John Blades can be justifiably proud of commencing this music series: a great and lasting achievement for which he will be well remembered.

Intensity is the first word that comes to mind when watching these four brilliant young players. Followed by words like sharp, precise, accurate, well-drilled and superb. They opened with Dussek’s String Quartet No. 3 (in E-flat, Op. 60, No. 3), written in 1806. Dussek (1760-1812) was one of the first popular traveling pianists of his era in Europe, filling a necessary gap between Mozart and Beethoven. Introducing the sustaining pedal on the piano into his works, Dussek’s use of this technique helped later composers.

This quartet is one of only three chamber works he scored without piano. It begins with a wide, expansive feeling, broad-based and melodious. Once this mood is established, fine solo work proceeds from lead violinist Jacob Fiser. A sudden break and the cello of Stepan Dolezal introduces a new tune copied by the first violin. The second violin, Stepan Jezak and violist, Jiri Pinkas work away at a warm but melancholy undertow.

The music builds to a spirited climax only to return to the original opening theme and hard work from violinist Fiser as his solos dominate the end of this movement.

A beautiful slow Adagio non tanto is introduced by all four players, perhaps a prediction of the Romanticism in music that was to come years later in the 1820s. The dominant first violin is accompanied by the other three in tunes that seemingly never link up, but swell to crescendo after crescendo before returning to the opening theme with the cello predominant. Dolezal’s cello playing was particularly rich and sensitive.

The third-movement scherzo opens brightly. The harmonies of the first and second violins are delicious to hear. A pining quality is heard from the first violin as the others trip lightly along in their accompaniment. A fugue starts the last movement (Allegro moderato). The cello begins passing it upward to the viola, next the second violin and last the first violin. The folk dance of movement number three is pressed into service again. Now they all play it in unison leading to a superb and charming end to this Dussek masterpiece. Warm applause greeted their efforts in giving a rare performance of this work in North America.

The second neglected Czech composer, Erwin Schulhoff (1894-1942), had a checkered career and a tragic end as a victim of the Nazis. A gifted pianist, winner of the 1913 Mendelssohn Prize, he also won it again in 1918, this time for composition. Leaving Prague, he fought for Germany in the First World War, stayed in Berlin, joined the avant-garde, took up playing jazz in clubs and followed Arnold Schoenberg’s atonal composition methods closely.

Returning to Prague in 1923 he entered his richest phase of composition. In the 1930s, he became a committed Communist, setting their manifesto to music as a cantata. 1939 saw him take Soviet citizenship. At the collapse of the Stalin-Hitler Non-aggression Pact he was arrested in Prague as a Jew, and deported to the Wulzburg concentration camp where he died.

Schulhoff’s Five Pieces for String Quartet of 1923 is dedicated to Darius Milhaud. Consisting of five dances, some of which are humorous, others infused with satire, it is a 20th-century modernist version of a Baroque suite.

First came the “Viennese Waltz.” Schulhoff creates a parody of this famous form with very exciting atonal beginnings. The cello plucks away as the other three work hard at expressive Schoenbergian-style dissonant music. Next was the “Serenade,” in which the two violins play a longing melody as the cello and viola pluck their strings; the cello takes over, becoming incessant in its monotonous driving melody. Now the second violin, viola and cello pluck at their strings as the first violin breaks free of this droning serenade, snatching a tune out of the air, as it were. The movement fades to a curious ending where each instrument gets one note and only one note, separately, to end the movement. A fascinating, fresh idea.

“Czech Folk Music” is the name Schuloff gives to his third piece. It is fast and engaging: sudden, dancing half-notes get even faster as the music goes forward to end on a quick high passage. Difficult to play, thrilling to hear. The fourth-movement “Tango” was the longest piece. The cello has much to say in establishing the mood and rhythms as the three smaller instruments play in unison against his melody. Then the solo first violin takes an obvious Czech folk tune and gives it a sexy treatment of whines and groans: wonderful instrumentalism here from Jacob Fiser conjuring the dancing tango dives of Buenos Aires.

The last piece, “Tarentella,” is the last piece. Plucked solo viola strings introduce a ravishing tune. A sense of urgency races through the fast and furious difficult music they play amid a myriad of alternate falling scales, where, when they reach the bottom, the first tune returns shortly for another abrupt ending. It was a dazzling disciplined display from each player of this remarkable set of five pieces: Darius Milhaud must have been quite appreciative to have it dedicated to him.

Schubert’s String Quartet No. 15 in G major (D. 887) followed after intermission. This, his last quartet, was written in 10 days between June 20 and 30 of 1828, the year he died at 31. Friends urged him to use it in a concert of his music. It was a huge success, but the critics paid little or no attention since the great violinist Paganini was giving a concert in another part of Vienna.

Hints of sadness run throughout this great string quartet, which was played magnificently, with a bright quality that again was indicative of this foursome’s remarkable disciplined delivery.

After three curtain calls and many shouts of “bravo,” the Bennewitz played an encore by Bela Bartok, the Allegretto pizzicato from his String Quartet No. 4 — no bows, just modern music plucked by four good guys.

Film: Playwright August Wilson began his chronicle of the African-American experience throughout the … END_OF_DOCUMENT_TOKEN_TO_BE_REPLACED

Film: Just in time with the opening of movie theaters in Palm Beach County comes the season’s most … END_OF_DOCUMENT_TOKEN_TO_BE_REPLACED

Music: The very last concert Franz Joseph Haydn attended in his life was in March 1808, about a year … END_OF_DOCUMENT_TOKEN_TO_BE_REPLACED