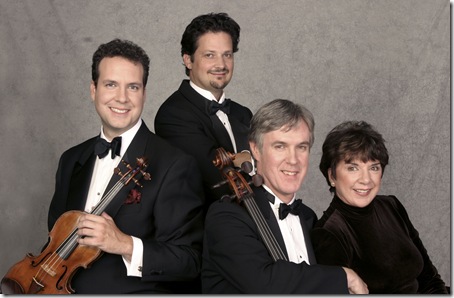 Charming, funny, and a crowd-pleasing moment, but what was most striking about the Bergonzi String Quartet’s concert at St. Paul’s Episcopal Church in Delray Beach was its admirable seriousness, and the high level of polish and quality with which this fine ensemble opened the 2009-10 classical music season in Palm Beach County.

The Bergonzis, who have been based for years at the University of Miami, were filling in as a last-minute replacement for the previously scheduled Vitali Quartet, a foursome of Mexican musicians whose cellist suffered a serious wrist injury earlier this month. The Bergonzi quartet has a sterling reputation for its work in music from South America, and opened the concert with the First Quartet (Op. 20) of Argentina’s Alberto Ginastera.

Written in 1948, the Ginastera quartet has all the hallmarks of the composer’s mature style: driving, heavily accented rhythms, intense dynamics, and an affinity for chords drawn from sources such as the open strings of a guitar. The Bergonzis (in addition to McConnell, they are Glenn Basham, first violin, Scott Flavin, second violin, and Ross Harbaugh, cello) brought it off with fire and aplomb, with only a bit or two of muddiness in the very difficult up-from-the-depths arpeggiated figures Ginastera likes to use in his codas.

The quartet showed how much variety there is Ginastera, whose music’s relentlessness often spurs charges of monotony and tedium. Here, for instance, the second movement was quiet and mysterious even as it percolated steadily away, and two fine solo passages from Harbaugh and Basham gave real expressivity to the third movement, with its noonday-heat feeling of stasis and slow unfolding. The treacherous ending, toward which the musical language of the entire piece has been resolving, was right on the money, bringing a neat climax to the work and shouts of enthusiasm from the decent-sized audience.

Three arrangements by violinist Flavin were featured next, ending with the Bernstein Glitter and Be Gay mentioned earlier. The set began with a deft instrumentation of the Schubert song Erlkonig (D. 328) in which the music for each of the speakers in the song — Erl-King, child, and father —  was given to a separate instrument. This worked well, and the next arrangement, a recasting of the Puccini song Morire?, salvaged from La Rondine for an Italian Red Cross benefit in 1917,  had a salon-orchestra sound that was completely appropriate for this pretty tune and its direct emotional appeal.

Flavin’s arrangement of the Bernstein song also was quite effective, and the clowning that went with it added some real mischievous fun to the afternoon; perhaps it could have used a fuller sound as the closing accelerando material got under way.

After a brief intermission, the Bergonzis closed the concert with the Quartet No. 14 in D minor, D. 810, of Franz Schubert, known as Death and the Maiden for the song of that name that supplies the material for its second movement.  This was an excellent performance in every important respect, beginning with the dramatic opening bars, which some quartets like to hammer to the point of harshness.

But in the Bergonzis hands it was forceful and contained at the same time; the effect was one of strength and nobility without being overly dramatic. That same sense of precision could be heard throughout the movement, with the chords clearly and carefully voiced in playing that showed off the range and depth of this ensemble.

The second movement, too, had a good sense of balance; starting with a hushed playing of Death and the Maiden and branching out into variations that were notable for sounding like logical outgrowths of the initial bars rather than tacked-on virtuoso pieces. In the Scherzo that followed I could have used a little more agitation, maybe a slightly faster tempo, though the elegant, sturdy performance it got was right in keeping with the rest of this interpretation, and the trio portion was surpassingly lovely.

The Schubert ended with a vivid reading of the tarantella finale, and here once more the approach to the music was noteworthy for its coolness and control. But that didn’t make it any less exciting; the ability of each of the four Bergonzi members to play his or her part with great accuracy and exceptional teamwork guaranteed a riveting last movement, and that is precisely what its highly appreciative audience got.

Film: Playwright August Wilson began his chronicle of the African-American experience throughout the … END_OF_DOCUMENT_TOKEN_TO_BE_REPLACED

Film: Just in time with the opening of movie theaters in Palm Beach County comes the season’s most … END_OF_DOCUMENT_TOKEN_TO_BE_REPLACED

Music: The very last concert Franz Joseph Haydn attended in his life was in March 1808, about a year … END_OF_DOCUMENT_TOKEN_TO_BE_REPLACED