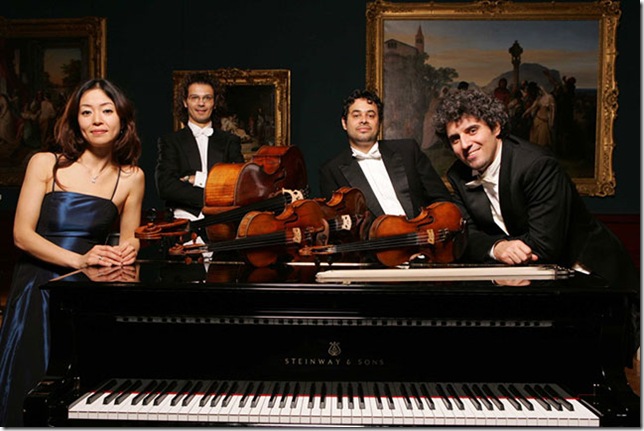 String quartets these days are relatively big business, and listeners have many opportunities to hear live and recorded performances of masterworks (and otherwise) by fine ensembles from around the world.

Most of the time we hear quartets with a modern edge, on instruments with metal strings whose sound cuts through the sonic murk of our noisy everyday. But when the string quartet form was in its infancy, instruments used natural strings and differently shaped bows, and what we have gained in clarity and brilliance has meant a sacrifice for a certain kind of intimacy.

Tuesday night, the Flagler Museum opened its seasonal chamber music series with Quartetto Bernini, a Rome-based foursome of 21 years’ vintage that has as its mission the historically congruent performance of lesser-known Italian works of the 18th and 19th centuries. They use the older bows, gut strings, perform on instruments from the 17th and 18th centuries, and tune their strings to a lower-pitched A than the one in wide use today.

The result, amplified by the music room of the Flagler, is an exceptionally warm and full sound, a sound well-suited for music of high emotional content. And so it was with the opening work on the program, a rarity by the Baroque Italian composer Francesco Durante, whose large output was almost exclusively sacred music. His Concerto No. 2 (in G minor) for string quartet, one of a set of eight, is a beauty, a lovely piece of writing composed by a fine melodist whose textures are much simpler than that of his contemporary J.S. Bach, but none the less affecting for that.

The quartet’s members – violinists Marco Serino and Yoko Ichihara, violist Gianluca Saggini and cellist Valeriano Taddeo – communicate admirably, and in the case of the Durante, which has numerous solo passages for the first violin, unified their sound in a way that was much more quartet than concerto. First violinist Serino demonstrated expert digital dexterity in the first movement’s fluid runs, but he didn’t dominate the music or reduce his colleagues to subsidiary status.

In the pretty second movement, the quartet did another smart thing in bringing out one of the secondary motifs― a gently falling seven-note phrase ―, giving it a slightly different color each time and using it to give this pastoral section a strong shape. They closed the concerto forcefully, playing with Vivaldi-style fire and briskness.

Next on the program was the early String Sonata No. 1 (in G), composed in 1804 by a 12-year-old Gioachino Rossini. Perhaps better-known in performances by string orchestra, it’s an astonishingly well-written and engaging piece for such a young person, and the Bernini brought out its melodic fluency with the appropriate lightness of attack that makes the music so charming.

Serino, Ichihara and Taddeo played their solo passages in the delightful first movement nicely, handing off each of them to one another without breaking the narrative line. Here again, though, the sound of the quartet as an ensemble of equal partners was paramount. The slow movement was tender without dragging, and the finale, in addition to its casual, cheeky reading, was distinguished by an emphasis on the first chord of the main theme’s harmonic pattern. It’s a sequence that starts in the middle, basically, and by stressing it just enough, the quartet reminded listeners of its mirthful intet, and the effect was excellent.

The second half of the concert was devoted to a Mozart masterpiece, his Quartet No. 14 (in G, K. 387). It marks a huge advance on his earlier quartets, and in it we can hear the sound of the mature Mozart, a composer of remarkable variety and harmonic imagination. Violist Saggini had a higher profile here, and it was a pleasure to hear his big, dark sound throughout.

The Berninis showed their attention to detail particularly well in the Minuet, in which the top three voices expertly played a tricky effect in which Mozart asks for each fast-moving note in a chromatic scale to be a different dynamic. The minor-key trio was strong and intense, making a fine contrast with the Minuet.

The Andante cantabile, surely inspired by opera, was florid and rich, and the tempo was perfectly steady, always a hazard with the quasi-improvisatory lines of the theme and the frequent changes in rhythmic cells. The finale, which as everyone always points out looks forward to the Jupiter Symphony six years later, bears the marks of Mozart’s study of fugal masters; the Berninis played it well, though a little more forward drive could have given it more excitement. The false ending and soft-voiced coda were handled masterfully.

For the encore demanded by the large audience, the quartet went in an entirely different direction, performing the Federico II movement from the Sicilian cellist and composer Giovanni Sollima’s Viaggio in Italia, written in 2000. As befits someone who’s collaborated with Patti Smith, this was a rambunctious, heavily accented rock song for strings, full of power, guitar-like chord structures and figurations, and infectious energy.

The audience loved it, and it was thrilling to hear this very fine group of musicians demonstrate their range in such a persuasive way, and not incidentally stand up for contemporary classical music. After the concert, Ichihara told me the quartet is hoping to do many more performances in the United States than it does now, and if the Flagler concert is typical of its work, we’d be more than happy to see them.

Film: Playwright August Wilson began his chronicle of the African-American experience throughout the … END_OF_DOCUMENT_TOKEN_TO_BE_REPLACED

Film: Just in time with the opening of movie theaters in Palm Beach County comes the season’s most … END_OF_DOCUMENT_TOKEN_TO_BE_REPLACED

Music: The very last concert Franz Joseph Haydn attended in his life was in March 1808, about a year … END_OF_DOCUMENT_TOKEN_TO_BE_REPLACED