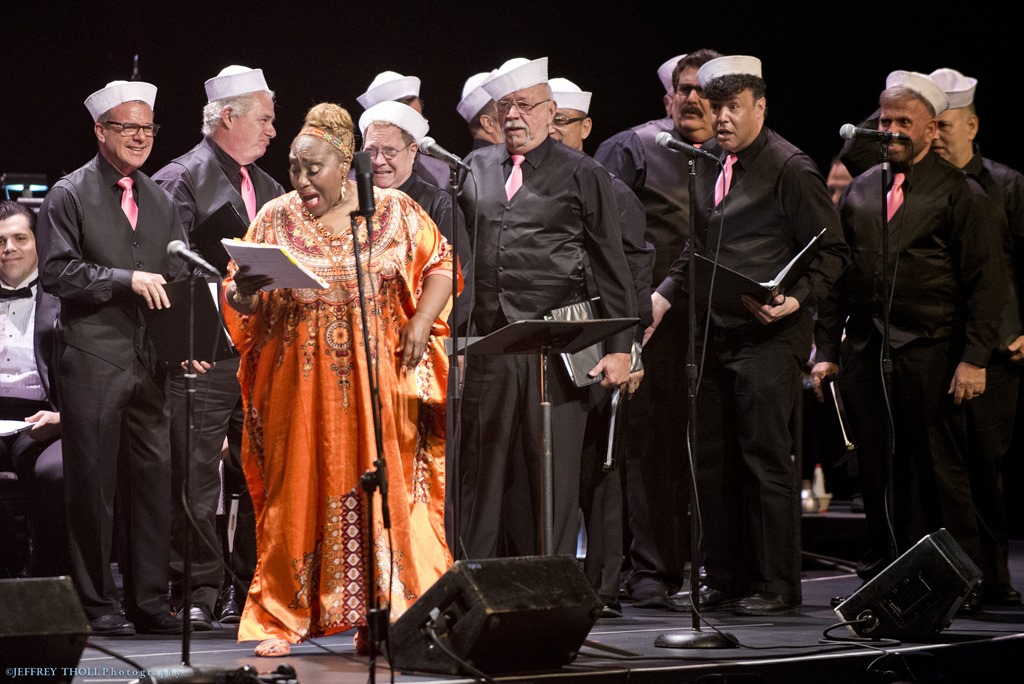 One of the largest performing arts venues on the Florida Atlantic University campus in Boca Raton is the Carole and Barry Kaye Auditorium. There are hundreds of seats on the floor, more in an elevated section to the rear and bleacher-style seating running up the two side walls.

The place was packed on a recent hot Sunday afternoon as enthusiastic theater-goers endured the heat and the crowds to reach their designated spots to enjoy an in-concert performance of Rodgers and Hammerstein’sSouth Pacific.

Whatever the inconvenience, it was certainly worth the effort as the gallery was treated to an outstanding performance by Aaron Kula and his 40-member Klezmer Company Orchestra, joined by a cast of 10 principal actors and singers along with 30 members of the Gay Men’s Chorus of South Florida.

This one-time-only matinee presented June 26 was a musical work of art, a production big enough to fill the vast room and still be personal enough to touch the hearts of every person in the audience.

South Pacific: In Concert was a special production of the 1949 Rodgers and Hammerstein classic. Principal performers read from scripts, spoke and sang while along the front of the stage. The vocals were so engaging that no one seemed concerned that the players were reading their parts.

Based on James Michener’s Pulitzer Prize-winning Tales from the South Pacific, the Tony award-winningSouth Pacific tells the story of an American nurse, Nellie Forbush, who falls in love with a French expatriate, Emile de Becque, on a far-off South Pacific island during World War II.

This is a complicated drama, for there are not one, but two love stories happening on this romantic, palm tree-lined bit of earth. Both relationships are threatened not only a war that’s happening on the outside, but by the prejudices and biases that are churning inside some of the characters’ minds.

While the story may be slightly dated, the reality that mankind continues to hate others for such petty reasons as a different color of skin or an unusual shape of eyes is a modern as today.

In the FAU show, Graham Fandrei (Emile) returned a fifth time to perform with KCO, joined by this wife, Rebekah Diaz-Fandrei (Nellie), who made her fourth appearance with Kula’s crew. Fandrei’s deep baritone voice brought elegance to perhaps the finest two songs in the show, “Some Enchanted Evening,” a celebration of meeting Nellie, and “This Nearly Was Mine,” which vibrated with impending sorrow.

Diaz-Fandrei’s soaring soprano voice combined excellently with Fandrei’s on “Some Enchanted Evening.” HerSouth Pacific repertoire varied greatly, from the self-deprecating “Cockeyed Optimist” to the definitive “I’m Going to Wash That Man Right Out of My Hair” and the bouncy “Honey Bun.”

Broadway-skilled Sommers was delightful as Bloody Mary, the sassy, middle-aged Tonkinese vendor of grass skirts, who engages the sailors in sarcastic, flirtatious banter as she tries to sell them her wares. They responded with the song, “Bloody Mary,” then vented their frustration at the lack of female companionship with “There Is Nothing Like a Dame.” Both tunes spotlighted the fine performers in the chorus.

South Pacific: In Concert was the 11th annual Spirit of America concert to showcase FAU Libraries’ Marvin and Sybil Weiner’s Spirit of America Collection. Kula told the audience at the start that the program also was being dedicated to the 49 people killed at the Pulse nightclub in Orlando.

Film: Playwright August Wilson began his chronicle of the African-American experience throughout the … END_OF_DOCUMENT_TOKEN_TO_BE_REPLACED

Film: Just in time with the opening of movie theaters in Palm Beach County comes the season’s most … END_OF_DOCUMENT_TOKEN_TO_BE_REPLACED

Music: The very last concert Franz Joseph Haydn attended in his life was in March 1808, about a year … END_OF_DOCUMENT_TOKEN_TO_BE_REPLACED