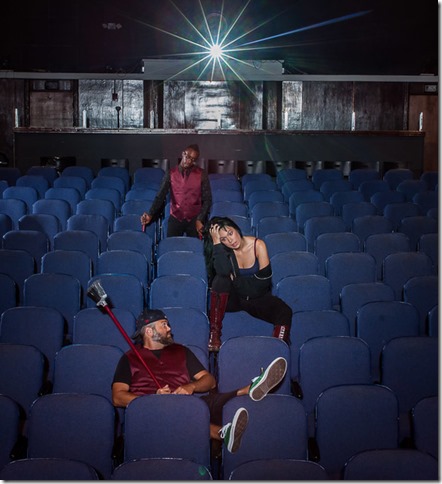 From front to back: Chevi Marquise Hill, Jessica Farr and David Nail in The Flick.

The Pulitzer Prize for Drama used to go to the giants of the American theater – the Eugene O’Neills, the Arthur Millers, the Edward Albees – for their towering masterworks – the Long Day’s Journey into Nights, the Death of a Salesmans, the Delicate Balances.

These days – 2014, to be specific – the Pulitzer goes to very minor works like The Flick, Annie Baker’s epic, in the sense of long and vacuous, look at the employees plying dead-end jobs at a dying Massachusetts independent movie theater.

First produced by off-Broadway’s Playwrights Horizons, the plot-challenged script so tested the patience of that company’s audiences that the artistic director felt the need to write them and defend his selection of the play.

On the other hand, it is not hard to see what drew Miami Shores’ Mad Cat Theatre to the play. Since it takes place in the seating area of a rundown arthouse, director Paul Tei saw the potential for a site-specific production on a grand scale in the former movie palace renovated and operated by Miami Theatre Center, which also contains a storefront performance space next door that Mad Cat usually uses.

For The Flick, however, the 330-seat auditorium becomes the stage and the audience members – all 62 of them at capacity – sit on what would typically be the stage. That’s fine, though the auditorium looks too high-toned for the dilapidated theater described in Baker’s play. You see, The Flick is an old-fashioned independent movie house, with a projector that plays the classic celluloid format while the rest of the industry has converted to digital.

So while the three employees – janitorial jacks-of-all-trade Sam (David Nail) and Avery (Chevi Marquise Hill), as well as projectionist Rose (Jessica Farr) – cling to their menial jobs, they are aware that the owner is on the verge of selling the place to an impersonal, modern chain exhibitor.

That is the crux of the drama, a sign of the times in our rapidly changing, job-gobbling world. While not uninteresting, it is hardly profound and, when stretched out to three hours, The Flick tests the audience’s patience and is found lacking. As a recent New York Times feature on the play noted, the running time is a function of the size of the auditorium, since Sam and Avery have to move about the seating area, sweeping up the trash left behind by the patrons. True enough, but at Mad Cat, the bloated length of the production is also a function of the glacial pace and gaping pauses instituted by director Tei.

The trio of characters could well be fugitives from a Kevin Smith film, immersed as they are in movie lore, whiling away the time playing film trivia games and debating the merits of prominent recent releases. We might even have sympathy for these shlubs if they weren’t involved in a scheme to scam “dinner money” from the box office.

Then there is the interpersonal side of the tale. Sam pines romantically for Rose, even though she has the prime job that he feels he deserves. And when left alone in the theater, Rose cozies up to young, naïve Avery, reaching out to him with an awkward, unexpected hand job. That is as momentous as The Flick gets. The cast certainly is committed to the play, and more than up to its demands, particularly Hill in his Mad Cat debut. If only such effort seemed worthwhile.

Film: Playwright August Wilson began his chronicle of the African-American experience throughout the … END_OF_DOCUMENT_TOKEN_TO_BE_REPLACED

Film: Just in time with the opening of movie theaters in Palm Beach County comes the season’s most … END_OF_DOCUMENT_TOKEN_TO_BE_REPLACED

Music: The very last concert Franz Joseph Haydn attended in his life was in March 1808, about a year … END_OF_DOCUMENT_TOKEN_TO_BE_REPLACED