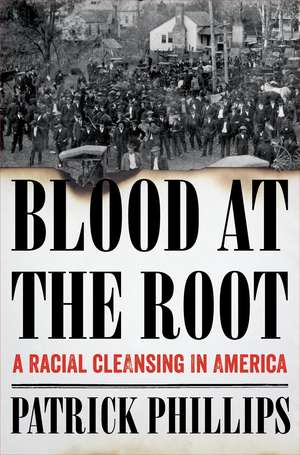 One of the most shameful pieces of American history involves the post Civil War decades, when thousands of blacks were lynched for perceived misdeeds.

Blood at the Root relates the ugly history of Forsyth County, Ga., where hateful whites decided in 1912 to drive out every remaining black resident under the threat of arson, lynching and gunfire. More than 1,000 terrified blacks fled the county, leaving behind houses, businesses and possessions.

Over the years Georgia mobs had regularly stormed county jails and abducted black prisoners, who were hung from telephone poles, tree branches or platforms with trap doors. Hangings would attract thousands of white spectators. Several pictures of gruesome lynchings are included in the book.

After a black man named Rob Edwards was hanged, heavily armed night riders “set out with one goal: to stoke the terror created by the lynching of Edwards and use it to drive black people out of Forsyth County for good.”

Not everyone approved of lynchings. Some whites tried to blame the evil practice on outsiders, even though it was clear that local bigots, including elected officials, were involved in the lynchings.

Wealthy plantation owners had mixed views, knowing how much they depended on black labor to pick cotton. Many former slaves worked in the homes of wealthy whites as cooks, drivers and washerwomen. Whites could not imagine life without their black “help.”

In 1912, hanging convicts by the neck until they died was still the primary method of legal execution. A decade later, states began executing convicts in electric chairs, but botched hangings were common well into the 20th century.

Hangings sometimes left a “prisoner writhing, gasping, kicking, and moaning at the end of a rope, as he or she died a slow and noisy death by strangulation.”

The 1990 census counted 14 African-Americans in Forsyth County. Two decades later that number had increased to 4,510, or 2.6 percent of county residents. The county’s overall population jumped from 38,000 in 1987 to more than 200,000 in 2015, making Forsyth one of the fastest-growing counties in the nation, as thousands of families moved from Atlanta to the distant suburbs.

“The old guard of Forsyth and the traditional defenders of ‘racial purity’ were simply outnumbered by newcomers with no history in the county and only the faintest inkling of its racist past.”

At times, Blood at the Root jumps from story to story in an awkward mix spanning much of the 20th century.

Last year the Equal Justice Initiative in Montgomery, Ala., published Lynching in America: Confronting the Legacy of Racial Terror. It documented 3,959 lynchings between 1877 and 1950. Georgia was No. 1, having strung up 586 men and women of color.

Film: Playwright August Wilson began his chronicle of the African-American experience throughout the … END_OF_DOCUMENT_TOKEN_TO_BE_REPLACED

Film: Just in time with the opening of movie theaters in Palm Beach County comes the season’s most … END_OF_DOCUMENT_TOKEN_TO_BE_REPLACED

Music: The very last concert Franz Joseph Haydn attended in his life was in March 1808, about a year … END_OF_DOCUMENT_TOKEN_TO_BE_REPLACED