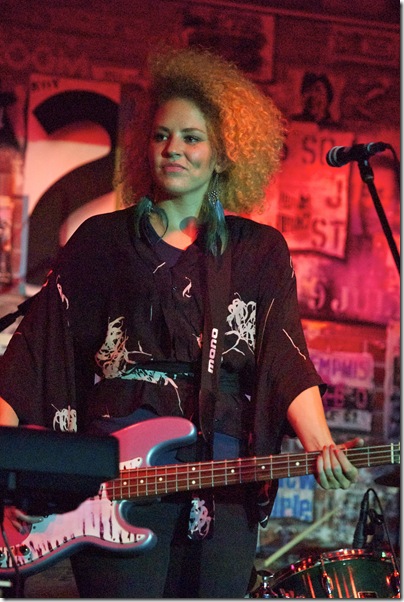 She’s only 25 years old, but Colorado-based vocalist, bassist and keyboardist Cassie Taylor brought her Soul Cavalry trio into the Bamboo Room on Friday with 10 years of touring experience already under her belt.

The Lake Worth venue hosted her several times as she toured with her father, noted modern blues artist Otis Taylor, from 2002-2010. She’s since released her debut solo CD Blue, plus the Girls With Guitars compilation with fellow singer/songwriters Samantha Fish and Dani Wilde.

And this Taylor displayed a more electric, less eclectic approach to the blues while playing songs from each release during two energetic one-hour sets.

With the club roughly half-full, Taylor took the stage alone to open with a surprising a cappella version of the Nat King Cole hit Mona Lisa that displayed her soaring vocal range. She then took to the keyboard to sing Haunted, from Blue, before her trio mates appeared. Another of that CD’s tracks, the bluesy Spoken For, provided an early highlight courtesy of guitarist Steve Mignano. Playing off of Taylor’s dynamic vocals and thumb-picked bass lines, he masterfully infused his solos with spatial areas to build momentum and drama.

“We love your father,” someone yelled after the applause died down.

New Orleans then gave drummer Graham Muller room to shine. He played the rims of the drum set during the folk-infused track’s verses, then switched to drums and cymbals to energize its choruses and solos. All of those were played by Mignano, whose slide work on the subsequent, 5/8-timed Gone and Dead showed further tonal colors.

The young Denver-based guitarist studied at the Musicians Institute in Los Angeles with Scott Henderson — the West Palm Beach native who moved to California in 1980 to work with Chick Corea, Joe Zawinul and Jean-Luc Ponty and form his own gifted fusion juggernaut, Tribal Tech — and it shows. A name to watch, Mignano displays the influence of Henderson plus several of his incendiary inspirations, from Jimi Hendrix and Jeff Beck to Albert King and Stevie Ray Vaughan.

“I think this is around the 10-year anniversary of the first time I played at the Bamboo Room with my dad,” Taylor said. “I was 16, and I’m about to turn 26. This song is about him.”

Taylor then sang and played the Blue track Disappointment solo, baring the feelings of a familial working relationship that stretched 10 years (she appeared in her early teens as a backing vocalist on her father’s 2000 CD White African).

“Most of my songs are autobiographical,” she explained afterward.

Mignano and Muller then joined her to close out the set with highlights in the Texas-style boogie of No No No and the slow blues of Lay My Head On Your Pillow. More dynamic than most of the set, the dramatic number nonetheless pointed out pitfalls. Its 6/8 time feel is something that Taylor leans on too much as a young songwriter, and Muller’s attempts to play quietly seemed forced and slightly awkward. Mignano’s momentous solo, however, carried the piece and showed that he’s already learned the lesson that escapes most young guitarists — that less can indeed be more.

Unfortunately, half of the existing crowd dispersed during intermission, reducing the room to quarter-capacity. But those who left missed Taylor’s best solo performance (the waltzing Black Coffee, from Blue), intriguing covers, and forays into and modern funk (including Move On, from Girls With Guitars).

It was a good future sign that some of the set’s best performances (like New Orleans and Gone and Dead in the first set) also came on new, unrecorded compositions. Muller’s rumba beat and tasty drum fills set up No Ring Blues, another of Taylor’s autobiographical pieces.

“My boyfriend actually asked me, ‘Why don’t you write a song about me?’” she explained. “He’s my tour manager, and fiancée now. We got engaged during a tour of Europe last year, and will get married in December. I think he finally proposed because he got tired of hearing that song.”

The hyperactive boogie of That’s My Man showcased vocal-and-guitar call-and-response between Taylor and Mignano, who displayed his country picking prowess, and the guitarist absolutely melted the blues covers. The first was a Howlin’ Wolf/Willie Dixon medley of the standards Smokestack Lightning and Spoonful, on which he displayed the often-elusive three T’s: taste, tone and technique.

“I used to do this song with my father,” Taylor said to introduce Hey Joe, the brooding 1966 hit for Hendrix. Mignano wowed the remaining crowd by using the entire fretboard, painting himself into corners that he creatively escaped from every time, and Taylor might have broken glass with her tonal screams during the final chorus — even as Muller’s curious late restraint kept the cut from fully exploding.

As Taylor asked for the house lights to go on and for the handful of patrons to move up to the dance floor, the trio closed with a rollicking funk vehicle, Satisfy My Soul from Girls With Guitars. Mignano contributed Shaft-worthy wah-wah pedal work, and he and Taylor sat at the edge of the stage to get even closer to the remaining diehards.

Taylor proved something by not shortening or mailing in her second set despite the sparse crowd. She’s clearly an artist who’s coming into her own, with a vocal swagger, ample musicianship and songwriting skills, an ability to find talented musicians (Muller also studied with a heavyweight, long-time Frank Zappa drummer Chad Wackerman), and a conversational ease with an audience that makes it seem like she’s sitting next to each member.

Age, experience and living the blues will help ease her out of the predictability of too many 6/8 time signatures and bass intros, and into employing more dynamics and background vocals, which were lacking completely. But her father gave her an enigmatic blueprint to succeed in creating her own style, and as Taylor’s strong new material proved on this night, this engaging daughter of a bluesman might eventually be capable of being fitted for the genre’s brass ring as well.

Film: Playwright August Wilson began his chronicle of the African-American experience throughout the … END_OF_DOCUMENT_TOKEN_TO_BE_REPLACED

Film: Just in time with the opening of movie theaters in Palm Beach County comes the season’s most … END_OF_DOCUMENT_TOKEN_TO_BE_REPLACED

Music: The very last concert Franz Joseph Haydn attended in his life was in March 1808, about a year … END_OF_DOCUMENT_TOKEN_TO_BE_REPLACED