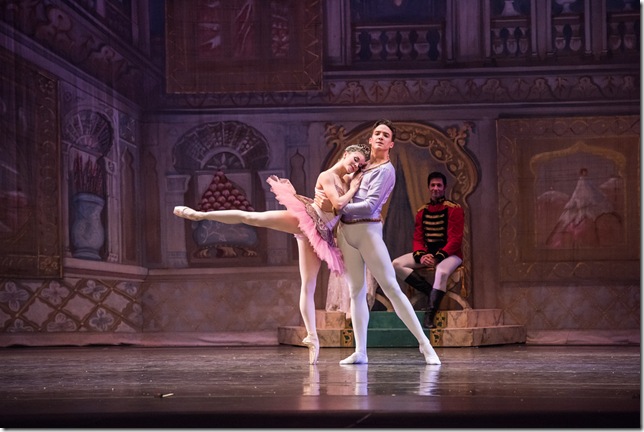 Boca Ballet’s executive director, Dan Guin, feverishly pulled together copies of Dance Magazine covers from the past several years that were strewn across his desk.

“He performed here,” he said, poking his finger at the photo of a familiar dance artist. “She did, too,” he said, pointing at another.

Guin repeated this action again and again until he singled 27 noted dancers who had gained fame either before or after leaving their mark at Boca Ballet Theatre.

He and wife, Jane Tyree, co-artistic directors of the Boca Raton-based dance company, are preparing to bring some of their charges home to celebrate the troupe’s 25th anniversary. A major gala featuring performances by national and international stars is scheduled Saturday.

Guin, a North Carolina boy and Tyree, born in Alabama, met in the early 1980s at Gus Giordano Jazz Dance in Chicago where she was executive director, scholarship director and ballet instructor.

“She was my boss in Chicago,” said Guin, who had used his ballet and jazz dance training in concerts and commercial work. “We performed together in ‘Carmina Burana.’ I asked her afterward if she wanted to go for a drink. She said she had just gotten a case of red wine and invited the dancers. I guess everyone else had plans.”

Actually, Guin had a plan of his own — and the couple married in 1987. They set off to find dance work in various places, with diverse levels of success, until they arrived in Boca Raton around 1990. Late that year, the Boca Ballet was chartered.

Before reaching Boca, they landed jobs with a dance company in South Carolina that “imploded. We were let go – on Christmas morning. We found ourselves without normal jobs.”

Eventually, they wound their way to Orlando, which brought them close to Boca Raton. “We did a show for Kelly Services at the Boca Resort,” Guin said. They would also star in a performance at the opening of the first amphitheater in Mizner Park.

In the summer of 1993, “I signed a contract to be artistic director, and to do three shows a year — Nutcracker, a full-length ballet and a mixed-repertory ballet.”

Today, BBT has grown and flourished. A 12,000-plus square foot facility on Northwest Sixth Avenue houses all day-to-day operations, including a school, rehearsals and box office. There are storage rooms for costumes, props and set construction. The building also houses three professionally equipped and air-conditioned studios.

In addition to teaching about 400 children and adults, Boca Ballet Theatre offers its “First Step Program” — a special dance project for children in the Boca Raton Housing Authority homes.

Another Boca Ballet effort involves working with people who have Parkinson’s disease. Called BBT4PD, it offers classes to more than 60 people with the ailment. A “Share the Joy” program will be held April 2, pairing Parkinson’s patients with Boca Ballet students in a moving tribute to their courage.

Film: Playwright August Wilson began his chronicle of the African-American experience throughout the … END_OF_DOCUMENT_TOKEN_TO_BE_REPLACED

Film: Just in time with the opening of movie theaters in Palm Beach County comes the season’s most … END_OF_DOCUMENT_TOKEN_TO_BE_REPLACED

Music: The very last concert Franz Joseph Haydn attended in his life was in March 1808, about a year … END_OF_DOCUMENT_TOKEN_TO_BE_REPLACED