Have you ever wondered what contemporary performing art is coming out of Los Angeles — that jaded bastion of entertainment — these days? What is fresh and authentic?

Your question would have not only been answered but also splendidly fulfilled if you had seen BodyTraffic perform this past weekend at the Duncan Theatre in Lake Worth. This terrific company, which closed out the Duncan’s dance series with a real bang, was founded in 2007 by two New York-based dancers, Lillian Barbeito and Tina Finkleman Berkett (who danced in every work).

One could categorize this gutsy dance company as a repertory company, but to call it a dancers’ company would be more accurate. The dancers are multifaceted artists, so it is no surprise that the directors are committed to keeping them fulfilled by getting a collection of works from a diverse group of cutting-edge choreographers so that they will continue to be as artistically challenged as possible. The program that BodyTraffic presented Friday night reflected these choices. The scope of the work shown and depth of the company was clearly evident.

In the first work of the evening, And at midnight, the green bride floated through the village square …, Israeli choreographer Barak Marshall wove together folk music with themes and images of the Middle East as he explored the traditional roles and interactions between young men and women that always lead to the celebrated ceremony of marriage.

As when one first views the lively design of a beautiful kilim rug, the beginning of the dance startled us with its vast array of geometric shapes. Ten dancers boldly and almost defiantly gestured in unison with their arms and hands, while moving their legs and feet simply as they rearranged themselves within the confined borders of the stage. Not knowing that these gestural design motifs would be revisited and re-explored throughout the dance, I wanted to know the meaning of each particular gesture as they were repeated with force and purpose in a flow of repeated choreographic design.

This was a very strong dance theatre work that required the company dancers to not only have exceptional dance technique but also to be speaking actors. After performing the numerous, physically strenuous ensemble sections, the dancers then had to launch right into sections where they communicated only with words and reaction.

In three vignettes, three men enticingly recited a savory recipe while suggestively looking at three women whose only response was to question the purpose of killing the fish, the fowl and animal. The man always responded that it was “a stupid animal.” A wry double-entendre? As the work progressed, bounteous interpretations of the position of women in a traditional culture were exposed. Though the women were often treated like chattel, it still managed to be humorous. At one point, a woman was carried in and inserted into a pair of red high heels that had been nailed on to a wooden board. It was a feast of rich imagery and munificent movement performed with a deep artistic investment by the dancers.

Once again, before you go, by choreographer Victor Quijada, was a complete and absolute contrast to the Marshall piece. Drawing upon his own background, which started with performing in hip-hop clubs in his native Los Angeles to performing with internationally acclaimed post-modern and ballet companies, Quijada has a movement vocabulary that is also wonderful and deliciously different.

His movement vocabulary had a quirky and uncanny quality like of an old piece of film run backwards or like the action of a superhero in today’s films. Suffice it to say he named his own dance company RubberbanDance Group.

The piece perhaps went on a bit too long, but it was mesmerizing. It was astonishing to see five of the dancers return and exhibit such finesse in changing gears by mastering this fundamentally different movement, which almost looked like they were being controlled by some kind of power outside their bodies.

The work was greatly enhanced by the mysterious lighting design of Yan Lee Chan who used the smoke of dry ice and strong directional beams of stark lights to diffuse or define the space, giving us the effect of an evolving, apocalyptic or outer space environment. 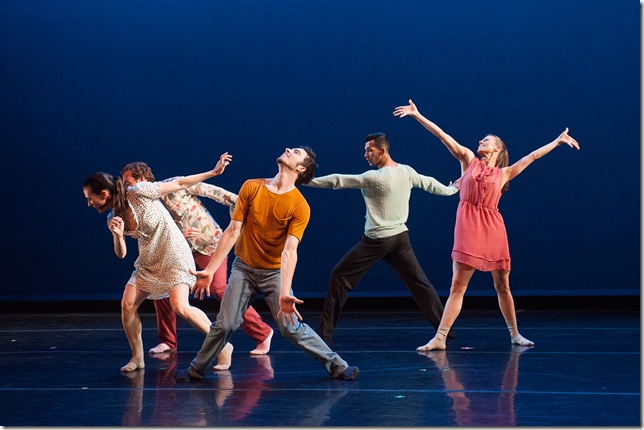 The final work, choreographed by Richard Siegal, was called o2Joy and what a joyful closer it was. From Oscar Peterson to Glenn Miller, the five dancers just let go and expressed the delight of moving to these contagious tunes.

Guzmán Rosado set the tone with a wonderful introductory solo that highlighted his adeptness at crafting his movement with rich texture and nuance thus creating an artful balance of flair and savoir-faire. Throughout the work, the handsome Miguel Perez’s dancing just flowed alongside the music, effortlessly showing off his clean and elegant technique. Strawberry-blond and bearded Andrew Wojtal nailed it as he flamboyantly danced while lip-syncing fantastically to the scat singing of Ella Fitzgerald in All of Me.

BodyTraffic was here at the Duncan in 2011, performing on very short notice Marshall’s Monger. When the company that was supposed to perform it couldn’t do it, BodyTraffic took on the challenge to learn and perform the evening-length work in just three weeks.

Four years later, they have returned with a lot more experience under their artistic belt, and now they are long on acting and have a breadth of skill that excelled in the hugely different movement vocabularies of the three choreographers presented in the program. This is more than just impressive; it is thrilling.

Film: Playwright August Wilson began his chronicle of the African-American experience throughout the … END_OF_DOCUMENT_TOKEN_TO_BE_REPLACED

Film: Just in time with the opening of movie theaters in Palm Beach County comes the season’s most … END_OF_DOCUMENT_TOKEN_TO_BE_REPLACED

Music: The very last concert Franz Joseph Haydn attended in his life was in March 1808, about a year … END_OF_DOCUMENT_TOKEN_TO_BE_REPLACED