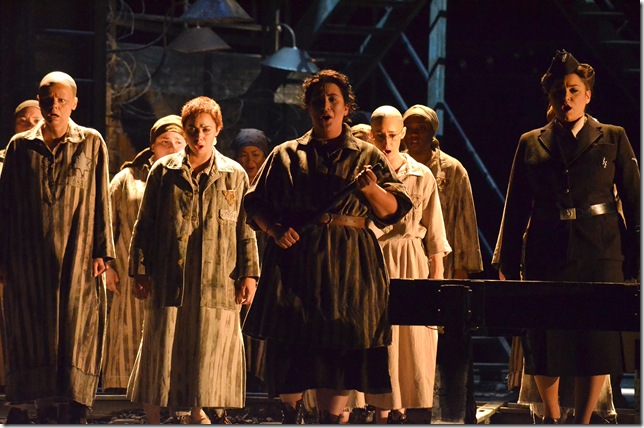 A scene from The Passenger. (Photo by Brittany Mazzurco-Muscato)

Florida Grand Opera’s current production of Mieczyslaw Weinberg’s Holocaust opera The Passenger is more than just a show that opera devotees and fans of the arts in general should make sure to see in its brief run this week at the Ziff Ballet Opera House.

The Passenger is a milestone for FGO’s 75th season in that it marks the transformation of this organization into a modern opera company. Without taking away from the separate greatnesses of the Palm Beach and Sarasota opera troupes, Florida Grand has now become something different: It has moved into the league of the country’s innovators, the kind of company that makes it a mission to present urgently relevant, challenging art.

The company’s just announced 76th season also shows it will be pursuing that direction. Aside from Bizet’s Carmen, FGO will present Jorge Martín’s Before Night Falls, Tchaikovsky’s Eugene Onegin and Stephen Sondheim’s operatic musical Sweeney Todd, with noted diva Deborah Voigt debuting as Mrs. Lovett. There’s not an Italian work in the bunch, which shows that General Director Susan Danis trusts her audience members enough to know that they are willing to take the leap into new territory with her.

And mounting The Passenger at FGO must count as something of a coup. Weinberg (1919-1996) was a Polish composer who fled the Nazi invasion of his country by walking to the Soviet Union, where he lived for the rest of his life. Imprisoned in early 1953 for “bourgeois Jewish formalism” in his work, he was spared death when Josef Stalin died in March of that year. His large worklist includes 22 symphonies, 17 string quartets, and seven operas.

He revered the older Dmitri Shostakovich, who in turn was Weinberg’s mentor and perhaps his biggest fan. Weinberg wrote The Passenger in 1968 for the Bolshoi Opera, which shelved it at the time and never returned to it. It had to wait until 2010 to be seen, when Austria’s Bregenz Festival presented it to spectacular reviews. It’s since by done by the companies worldiwde, and Saturday night in Miami it made its South Florida debut. 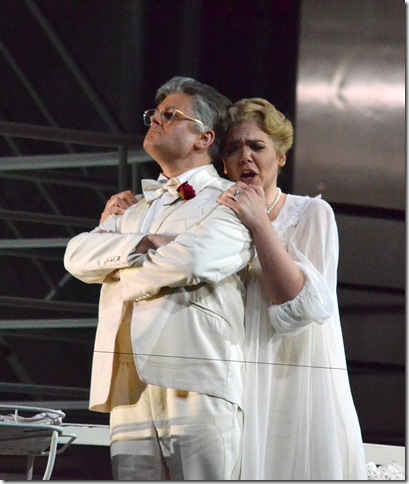 David Danholt and Daveda Karanas in The Passenger. (Photo by Brittany Mazzurco-Muscato)

The libretto, drawn from concentration camp survivor Zofia Posmysz’s memoir by Alexander Medvedev, starts at sea, with a West German couple, Walter and Liese Franz, on their way to Brazil in the early 1960s, where Walter is going to take up a diplomatic position. Aboard ship, Liese sees a mysterious woman whom she becomes convinced is Marta, a Polish woman who was under her supervision when Liese was a warden at the Auschwitz death camp.

It’s hard to get a much darker plot for an opera, but the Bregenz Festival, whose production FGO is using, is built around an ingenious set design by Johan Engels in which the opera’s only two settings — the luxury ocean liner and the Auschwitz death camp — are stacked on top of each other. The gleaming white ocean liner (indeed, everything on the ship is white, down to the double bass in the onstage dance band) is at top, and below, a woman’s barracks is brought on by train tracks, others of which extend from the front to the back of the stage.

Most of the opera takes place below decks, as it were, in Auschwitz, where the lead interest is Marta, a Polish woman who had been engaged to a talented musician named Tadeusz who also had been taken to the camps, where both believe each other dead. The opera is told largely in flashback, as Liese takes an interest in Marta and offers to let her meet with Tadeusz when the two discover that they are in fact alive. Liese’s past was unknown to her husband Walter, who finds it distressing, but Liese believes that she was simply following orders and is largely blameless for the atrocities of the Nazi regime. “I was a good German,” she sings at one point. “I believed in the Führer.” 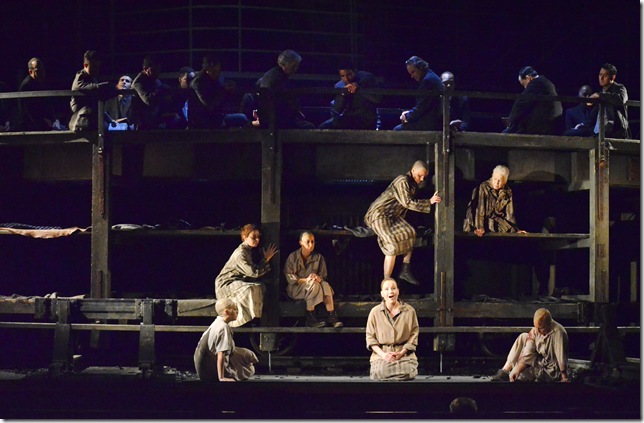 Adrienn Miksch (center) as Marta in The Passenger. (Photo by Brittany Mazzurco-Muscato)

The opera is sung in seven different languages, including English, which is the language of the staff on the ship and of a male chorus, clad here in suits and holding red books in which they record events and make comments about “the black wall of death.” Other than German, the other languages are heard among the women prisoners, who are Polish, Fr1ench, Czech and Russian; one prisoner sings in Yiddish. Because Posmysz is Catholic and was a political prisoner rather than being a member of a targeted religious group, the Auschwitz scenes have a quality of generic brutality rather than an immersion in a specifically Jewish tragedy, which is very different than the cultural explorations of the Holocaust an American audience usually encounters.

The British director David Pountney, who brought The Passenger to light in his role as director of the Bregenz Festival, has staged this work with uncommon skill, in that the audience takes in a good deal of activity in different places without losing the sense of camp claustrophobia. Fabrice Kebour’s lighting design, more than in most operas, is central to the look of The Passenger, and it expertly draws the viewer in with the sickly yellows and harsh spotlights of the death camp, and the full illumination of the ship, which lends those scenes a sterile, icy prosperity.

The whole thing is bound together by a score that is highly atmospheric and masterful without being especially compelling. It is reminiscent of composers such as Britten (the running 13ths of Peter Grimes make a few appearances) and Shostakovich in particular, but without that composer’s gift for motif and melodic profile. This is particularly evident when the Russian prisoner, Katya, sings an old folksong that sounds of a piece with the mildly astringent, melancholy tone of the rest of the opera. It also is a relatively cerebral take on a dramatic story, which gives the work a curiously quiet and interior feeling, even at its moments of highest ferocity. Nevertheless, it’s beautifully crafted and brilliantly orchestrated, and surely one of the finest contemporary operas to join the active repertory of the world’s stages in recent memory. 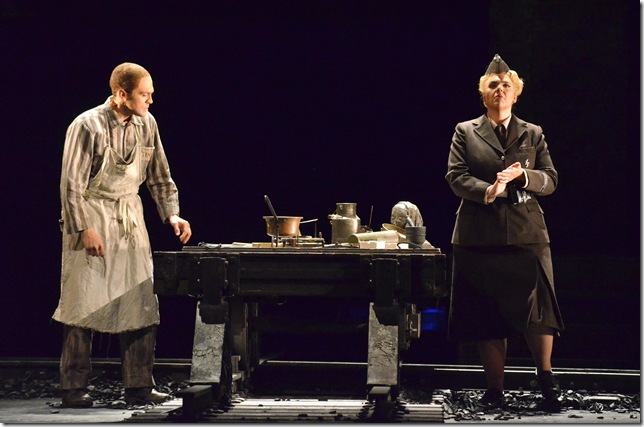 John Moore and Daveda Karanas in The Passenger. (Photo by Brittany Mazzurco-Muscato)

The Hungarian soprano Adrienn Miksch, as Marta, was riveting, giving an intense, heartfelt performance. Her voice is pretty and well-rounded, not exceptionally large but deeply emotive and relatable. The Greek mezzo Daveda Karanas was an excellent Liese, with a big, strong instrument and plenty of vocal stamina and believable acting hauteur.

The seven women prisoners with whom Marta lives and interacts made a powerful impression in aggregate. It’s a pity Weinberg writes so few vocal harmonies in this opera; a snippet of choral work when the women are urging Marta to be calm hinted at lovely avenues the composer chose not to investigate. But there was fine singing from all of them, in particular the American mezzo Kathryn Day as Bronka and the Russian soprano Anna Gorbachyova as Katja. Day’s capacious, richly colored voice was particularly affecting as she invoked a prayer to a God she wasn’t sure existed. Gorbachyova was splendid, showing off a voice of exceptional evenness and presence that won her well-deserved acclaim at the curtain call.

The American baritone John Moore was a very fine Tadeusz, with a forceful tone that fit the declamatory nature of the vocal writing well. The Danish tenor David Danholt, as Walter, started out slightly underpowered, but came into his own with a lovely voice that has an exciting edge to it. One of the company’s Young Artists, American bass-baritone Alex Soare, showed off an impressive voice in his few lines as an SS man (he was quite a good Don Basilio earlier in the season for FGO’s Barber of Seville). 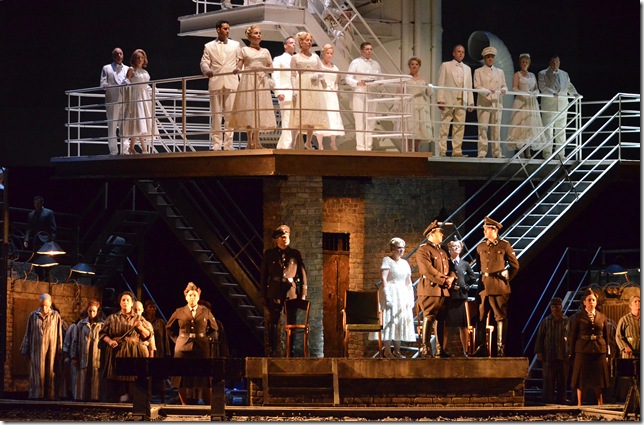 A scene from The Passenger. (Photo by Brittany Mazzurco-Muscato)

The music was under the direction of Steven Mercurio, who did a superb job. This opera has acres of soft, mysterious passages, and Mercurio knit them all together beautifully, creating a sonic space in which the action existed; it was not just simply accompanied. He could not have done so without the wonderful playing of the FGO orchestra; rarely have I heard such expressive playing at the outer limits of the soft dynamics.

Again, this production is a turning point for Florida Grand Opera. Given good fiscal health over the next few years, it can now take a place with companies such as Houston, Chicago, Seattle and other risk-takers, elevating not just the arts in South Florida but opera in the United States. A visit to the opera house should generate as much conversation as a good play does, and The Passenger does that. What it also does is show us the direction this opera company now wants to go, and that is good news indeed for our region’s serious arts scene.

The Passenger will be performed Tuesday, Friday and Saturday, at 8 pm each night, at the Ziff Ballet Opera House, Adrienne Arsht Center, Miami. Call 800-741-1010 or visit www.fgo.org.

Editor’s note: This story has been updated to correct a reporting error. An earlier version of the story misidentified the woman who sang the “prayer to a God she wasn’t sure existed.”

Film: Playwright August Wilson began his chronicle of the African-American experience throughout the … END_OF_DOCUMENT_TOKEN_TO_BE_REPLACED

Film: Just in time with the opening of movie theaters in Palm Beach County comes the season’s most … END_OF_DOCUMENT_TOKEN_TO_BE_REPLACED

Music: The very last concert Franz Joseph Haydn attended in his life was in March 1808, about a year … END_OF_DOCUMENT_TOKEN_TO_BE_REPLACED