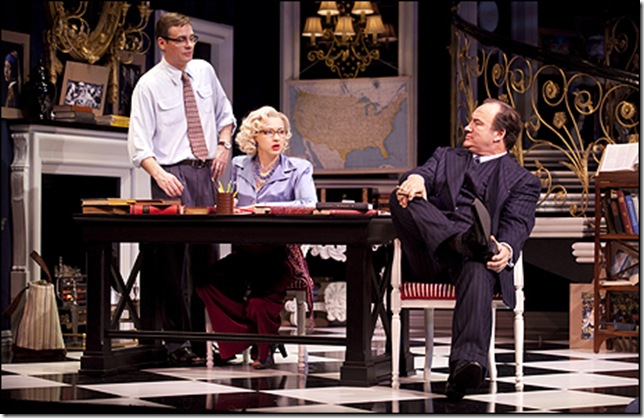 This afternoon I got to see the handiwork of those three young chargers from Boca Raton — Philip Morgaman (27 years old), Frankie J. Grande (28) and Brian Kapetanis (28) — the lead producers of the new revival of Born Yesterday that opened last Sunday night to very favorable reviews. That was the opening I missed taking a three-hop flight to New York by way of Detroit.

It remains to be seen whether they can make money on the venture, since the show’s male stars, Jim Belushi and Robert Sean Leonard, are only committed to the production until July, when they head back to the West Coast for their television responsibilities. Still, the chemistry between them and particularly with their co-star Nina Arianda, who gives a certifiable star-making performance as smarter-than-she-looks Billie Dawn, is evidence that these emerging producers have good taste and theatrical savvy.

From the start, after Morgaman came up with the idea of reviving Born Yesterday and persuaded the estate of playwright Garson Kanin to issue them the performance rights, they knew that they wanted two stageworthy television veterans to play thuggish scrap metal magnate Harry Brock and crusading New Republic writer Paul Verrall, plus an unknown with strong comedy chops for Billie. And that is exactly what they got.

The play, which first met audiences in 1946 but comes off as remarkably relevant to the political scene today, is kind of a 20th-century Pygmalion tale, with chorus girl Billie visiting the nation’s capital for the first time ever, brought to Washington by her brusque, bullying beau Brock, who has come to lean on a bought-and-paid-for senator to get favorable treatment on tariffs and taxes.  Knowing he will need to take Billie to D.C. social functions, he hires Paul to educate her, a task Paul succeeds at all too well.

Written in three acts, for an audience with far more patience than a 2011 audience has, the script can be pokey, but director Doug Hughes finesses the problem nicely and the cast also more than compensates. 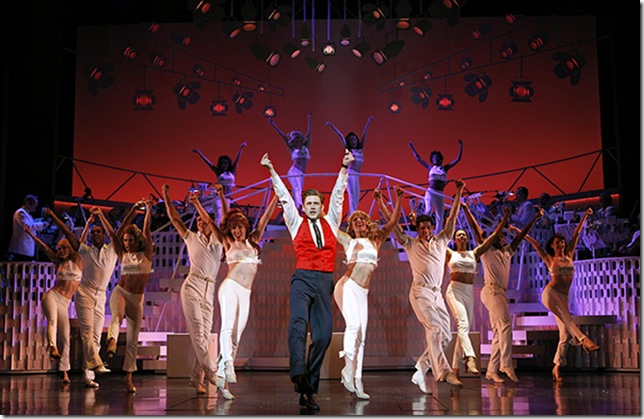 My New York theatergoing ended on a disappointing note, seeing the musical Catch Me if You Can, based on the 2002 Steven Spielberg/Leonardo di Caprio movie about real life con man-counterfeiter Frank Abagnale, Jr. It reunites the creative team of Hairspray — songwriters Marc Shaiman and Scott Wittman, director Jack O’Brien and choreographer Jerry Mitchell — with none of the same buoyant results.

Much of the problem stems from the device of telling the story in the style of a ’70s TV variety show, which leads to a homogenized, upbeat score and precious little emotional impact. Ultimately, the show is not very involving and leading performer Aaron Tveit (Next to Normal) is not charismatic enough, does not have the star power, to make us care.

Karole Armitage, the choreographer of the Hair revival, called me Saturday, apologized for the interview that did not happen on Friday and rescheduled for this morning. So instead of going for a leisurely brunch with my friends, I will try again to meet with Karole at the Joyce Theatre downtown before catching my plane home.

Film: Playwright August Wilson began his chronicle of the African-American experience throughout the … END_OF_DOCUMENT_TOKEN_TO_BE_REPLACED

Film: Just in time with the opening of movie theaters in Palm Beach County comes the season’s most … END_OF_DOCUMENT_TOKEN_TO_BE_REPLACED

Music: The very last concert Franz Joseph Haydn attended in his life was in March 1808, about a year … END_OF_DOCUMENT_TOKEN_TO_BE_REPLACED