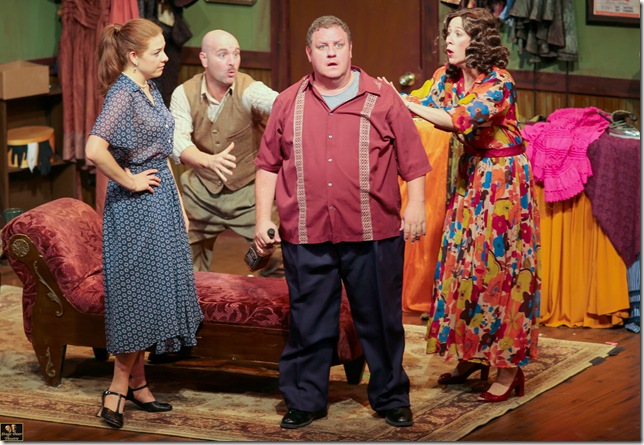 The play, Moon over Buffalo, written by slapstick playwright Ken Ludwig, drew iconic comedienne Carol Burnett back to the Broadway stage when it debuted in 1995. The action and dialogue are fast-paced as the characters are constantly bickering or frantically trying to resolve some confusion.

In many ways, it mimics Ludwig’s previous farce, Lend me a Tenor, which was also set in a Northeast city decades ago and featured a drinking-and-womanizing male star, justifiably jealous wife and young stage manager desperately trying to keep things together, among other plot devices.

Set in 1953, Moon over Buffalo focuses on George and Charlotte Hay (Ken Clement, Michelle Foytek), a couple of traveling actors who find themselves relegated to a theatrical venue in upstate New York. The location doesn’t do much to blunt Charlotte’s dreams of becoming a Hollywood film star, but George is content with the status quo.

Living with them is Charlotte’s mother, the very hard-of-hearing Ethel (Miki Edelman), whose condition easily plays into the befuddlement.

The Hays’ Buffalo malaise gets a shot in the arm when famed director Frank Capra calls George to say he needs replacements for Ronald Coleman and Greer Garson in a movie he is filming. Capra says he is coming to Buffalo to see George’s troupe on stage to see if they fit the substitution bill.

Angry Charlotte, who has just learned that George fathered a child with Eileen (Jessica Carmen), a member of his acting troupe, doesn’t believe his Capra tale and announces her plan to run away with Richard (Glen Lawrence), George’s lawyer.

When Charlotte discovers the call is true, she has a very rapid change of heart. But when she returns home, George is gone. He hooks up with a bottle of Jack Daniel’s Old No. 7 at a local drinkery and goes into a drunken stupor.

This sets the stage for wild antics and mistaken identities and instructions.

While frantically looking for George, Charlotte bumps into Howard (Edward Miskie), fiancé of the Hays’ daughter, Roz (Susan Slotoroff). Charlotte’s hard-of-hearing mom mistakenly introduces him to her daughter as Frank Capra. So Howard gets the “red carpet” treatment from the fame-hungry Charlotte — somewhat to his chagrin. 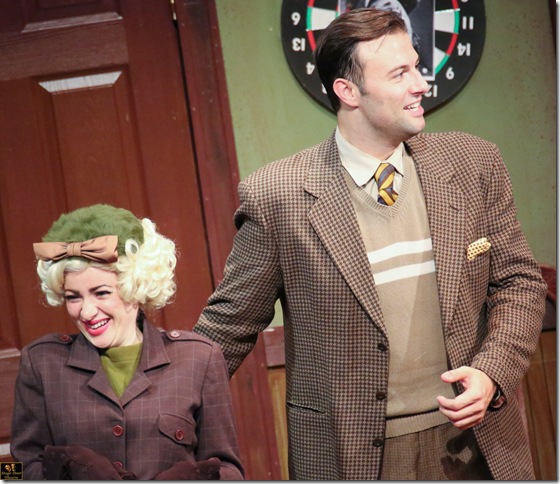 When George returns, he believes that Howard is actually Eileen’s brother, seeking revenge for George’s affair. In what he thinks is self-defense, George ties up the innocent Howard and locks him in a closet.

Act 1 of Moon over Buffalo is short — barely 40 minutes — and develops slowly compared to the ramped-up pace of Act 2, which gallops at warp speed to an ending that is surprisingly normal and even upbeat.

The Moon over Buffalo cast is perfectly attuned to the requirements of this sometimes out-of-control play. Keeping the actors strapped to the stage is director Michael Leeds, who honed his skills on Broadway before coming south to Florida.

The program is a festival of fine acting, with Clement, a well-heeled thespian, leading the way. A dimpled, curly-haired, somewhat rotund actor, he rocks and rolls (sometimes literally) with the action. A skilled and savvy performer, he brings a charming, Jackie Gleason-like quality to the stage.

Foytek, in her debut at Broward, also runs the gamut from calm to crazy and brings great acting ability to a production that demands physical performance skills and comic moves akin to those of the famed Ms. Burnett. Foytek certainly does not disappoint.

Slotoroff puts her own stage know-how into high gear, particularly in Act 2 when she has to take the lead in the ill-planned theater production that is supposed to be entertaining Frank Capra. The show is a total wreck, and Slotoroff truly shows her funny side trying to save the sinking ship.

As stage manager Paul, Andy Quiroga brings a pleasing demeanor to the stage. He occasionally joins the overall bluster, but tries to keep his head above the fray – and pursue his desire to wed Roz.

Also debuting in Moon over Buffalo at the Stage Door is Edward Miskie, whose well-coiffed hair and heart-melting good looks make him perfect as Howard, the TV weatherman. His performance combines his talented acting ability with just enough cockiness to make him seem like a real TV guy.

With more than 70 theatrical productions under his belt, Lawrence is truly schooled in the ways of the stage. He plays the part of a lawyer so well that he is soon despised by the audience.

Edelman brings a combination of gentle innocence and staunch irascibility to the show. And Carmen is excellent as the vulnerable actress Eileen who adds more stress to a situation that’s already overburdened.

Leeds is a fortunate director. Not only does he have a great cast, but a wonderfully cluttered set, the work of designer David Torres. The Hays’ apartment looks like a theater museum on steroids, with old posters and costumes hanging about.

Costumer Peter Lovello has come up with some fine designs, with help from tailor Carmen Guzman and lead seamstress Maria del Carmen Portilla.

Although Moon over Buffalo is set in the ’50s with jokes from that era, the dialogue is still relevant to modern audiences. The physical comedy is done well. It pushes the envelope just enough to give the humor an edge.

Music: The very last concert Franz Joseph Haydn attended in his life was in March 1808, about a year … END_OF_DOCUMENT_TOKEN_TO_BE_REPLACED

Film: Major League Baseball culminates each season with the World Series, but to find the true … END_OF_DOCUMENT_TOKEN_TO_BE_REPLACED