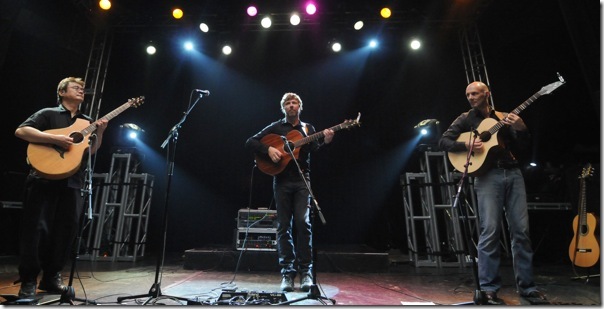 The California Guitar Trio drew a near-capacity crowd to Florida Atlantic University’s Lifelong Learning Society Auditorium in Jupiter on Saturday night, and entertained a diverse audience (with ages ranging from 20s to 80s) with an equally diverse song list.

But diversity is a natural trait for a trio of acoustic guitarists made up of one American (Paul Richards, from Salt Lake City, Utah), one Belgian (Bert Lams, from Affligem) and one native of Japan (Hideyo Moriya, from Chiba). The three met in England in 1987 and established the group in Los Angeles in 1991, naming themselves after the state where they formed because each figured they might not play together beyond its borders.

That’s partly because the CGT formed the antithesis of the standard, stardom-seeking guitarist’s mind-set (especially in L.A.). Each member was talented enough to be a solo artist, yet employed an uncommon mantra of unselfishness, discipline and an open mind toward a more unified musical goal.

The trio opened the concert with Cathedral Peak, the first track on their latest CD Andromeda, and achieved dramatic and orchestral harp-like tones in 5/8 time. Moriya’s Melrose Avenue, from the CGT’s 1993 debut Yamanashi Blues, upped the ante to 7/8 time and showed both classical and flamenco influences.

Ennio Morricone’s theme from the film The Good, the Bad and the Ugly then upped the energy level, as each guitarist played a vital part to the memorable score — Moriya the anchoring bass notes; Richards the effects, and Lams the whistling pattern.

“We’d like to demonstrate what we call a circulation,” Richards said afterward. “It’s something we learned through Robert Fripp, where 30 guitarists would sit in a circle, play a single note and pass it on.”

The three guitarists first toured together as part of Fripp’s League of Crafty Guitarists, which is fitting, because they’re nothing if not crafty. Their featured circulation was on one of Bach’s lute suites, and their interlocking notes — amazingly simplistic in and of themselves — formed a complex whole that approximated the sound of a lute, the stringed precursor to the guitar.

Most of the pieces, including the Ventures’ hit Walk, Don’t Run and Mason Williams’ Classical Gas, clocked in at under four minutes. But the trio stretched out on an early highlight, the cover of Pink Floyd’s Echoes. As Moriya held down the bass and rhythm parts, Richards’ slide playing mimicked David Gilmour’s effects-laden intro and middle cries. Lams played the vocal melody, adding flurries of finger-picked notes near the coda of an exhilarating 10-minute opus.

On Sleepwalk, the 1959 instrumental hit for Santo & Johnny, Lams handled the bulk of the rhythm guitar and Moriya the bass notes (with his thumb) as Richards recreated the pedal steel guitar melody with his slide.

Toccata and Fugue in D minor, Bach’s haunting composition for pipe organ, featured blistering runs by Lams and Moriya within another avalanche of perfectly placed notes — all of which led to an unscripted celebration.

Lams, who lives in Pennsylvania, has in-laws who live in Jupiter, and they surprised the trio with a cake to commemorate the 20-year anniversary of its formation in January of 1991. The audience sang Happy Anniversary; Richards blew out the candles, and he then answered questions on composition, tuning and their guitar brand (Breedlove).

Film: Playwright August Wilson began his chronicle of the African-American experience throughout the … END_OF_DOCUMENT_TOKEN_TO_BE_REPLACED

Film: Just in time with the opening of movie theaters in Palm Beach County comes the season’s most … END_OF_DOCUMENT_TOKEN_TO_BE_REPLACED

Music: The very last concert Franz Joseph Haydn attended in his life was in March 1808, about a year … END_OF_DOCUMENT_TOKEN_TO_BE_REPLACED