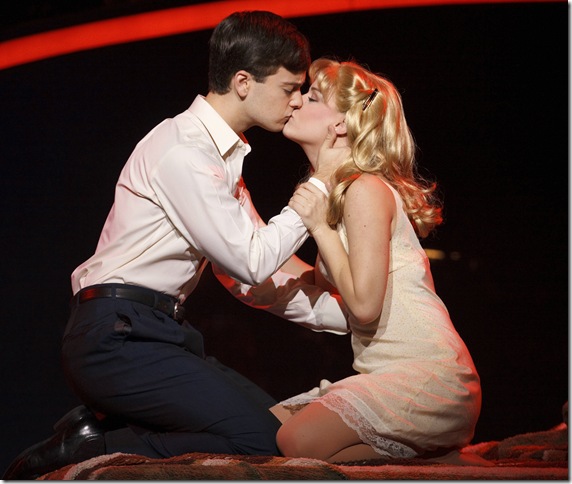 The concept musical was an invention of the 1970s, typified by Chicago, which couched a tale of murders in Cook County as a series of vaudeville turns. When it works, the results are dazzling. When it doesn’t, you have a dull misfire like Catch Me If You Can, currently on view at the Kravis Center in West Palm Beach.

Based on the 2002 Steven Spielberg flick starring Leonardo DiCaprio and Tom Hanks, it is a real-life yarn of teenage con man/counterfeiter Frank Abagnale Jr., being chased by FBI agent/bureaucrat Carl Hanratty. As the overlong movie demonstrated, there is more than enough story to relate, as Frank Jr. brazenly poses as an airline pilot, doctor and lawyer. Yet the musical muddies things all the more by presenting the kid’s story as a ’60s TV variety show, with the larcenous scamp as emcee.

The idea seemed to have promise, but the show’s creative team ― almost all of whom turned Hairspray into Broadway gold ― paints itself into a corner. That trap is most noticeable in the score by Marc Shaiman and Scott Wittman, who have also become known for supplying the songs for that small-screen guilty pleasure, Smash. In Catch Me, their gift for period mimickry is applied to the “on-air” presentational production numbers, which have an aural sameness and do little to move the story along.

The script by Terrence McNally (Ragtime, Kiss of the Spider Woman) follows the film, but also puts more emphasis on Frank Jr.’s strained relationship with his loser dad as well as the young flim-flammer’s relationship from a distance with Agent Hanratty, his surrogate father. 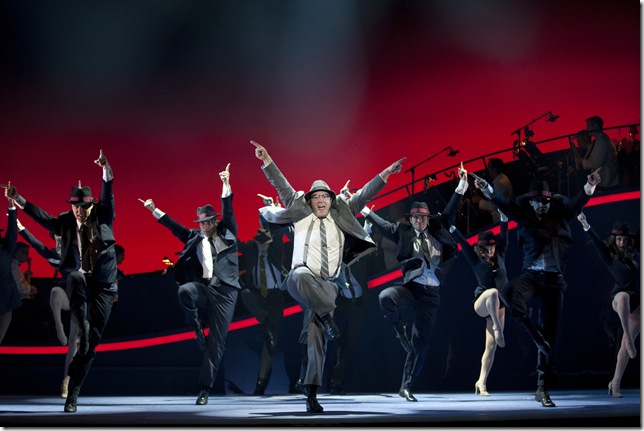 Merritt David Janes and cast in Catch Me If You Can. (Photo by Carol Rosegg)

Introducing himself as host of The Frank Abagnale Jr. Show, the kid describes his world in the opening number as Live in Living Color. In contrast, Hanratty’s milieu is strictly shades of gray, but that does not stop him from delivering an unexpected song-and-dance showstopper, Don’t Break the Rules.

The difference between their lives is illustrated by a stunning animated LED back wall, which keeps filling the stage with bursts of locale or abstract designs, both credited to Bob Bonniol. His videos are the most interesting elements of this production, which says more about the uninvolving story line.

With the show folding quickly on Broadway last year, its producers passed on mounting a road company, but Troika Entertainment came up with a non-Equity tour that allowed the original creators to do some rewrites and redesigns. Matt Lenz recreates Jack O’Brien’s staging and while his cast is mostly new to national tours, they certainly have the vocal and acting skills to put the material across. The same goes for Nick Kenkel’s recreation of Jerry Mitchell’s choreography, primarily setting in motion a chorus of leggy chorines, shades of Dean Martin’s Golddiggers.

Recent FSU grad Stephen Anthony takes the show’s reins as Frank Jr., radiating sufficient charisma to endear himself to the audience, despite the character’s larcenous ways. Stopping him from running away, and running away with the production, is Merritt David Janes as Hanratty, also a source of theatergoer sympathies.

Still, it is hard to deny that a team of Broadway veterans like this show has should have come up with something that packs more theatrical wallop. The cast is fine, the electronic design is a wonder. The only catch is Catch Me If You Can really isn’t good enough to bother with.

Film: Playwright August Wilson began his chronicle of the African-American experience throughout the … END_OF_DOCUMENT_TOKEN_TO_BE_REPLACED

Film: Just in time with the opening of movie theaters in Palm Beach County comes the season’s most … END_OF_DOCUMENT_TOKEN_TO_BE_REPLACED

Music: The very last concert Franz Joseph Haydn attended in his life was in March 1808, about a year … END_OF_DOCUMENT_TOKEN_TO_BE_REPLACED