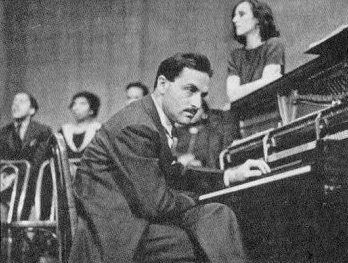 Those who have seen Marc Blitzstein’s The Cradle Will Rock in performance can testify to its burning, slashing energy, a drive that moves the piece of 1937 agitprop ineluctably forward even as its angular melodies give the listener very little to hang onto.

But there was another side to this fascinating American composer (1905-1964), and a welcome new disc being released Tuesday by San Francisco-based Other Minds shows us what that was, as well as presents at least one work that deserves to be widely recognized in the American classical canon.

First Life: The Rare Early Works, is a collection of three pieces for solo piano, Blitzstein’s instrument, and two string quartets, written in the years from 1927 to 1932, when t 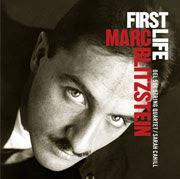 he composer was fresh out of studies at the new Curtis Institute and had continued on to teaching sessions with Nadia Boulanger in Paris and Arnold Schoenberg in Berlin. (The excellent notes by Howard Pollack, who is at work on a Blitzstein biography, say that he much preferred Boulanger.)

While Blitzstein’s left-wing politics were an important consideration for the type of theater he wanted to write — he was at work on an opera about the 1920s anarchists Sacco and Vanzetti when he was beaten to death in Martinique in an apparent gay-bashing — as a purely instrumental composer he was a writer of his time, a musician enamored of the brittle, impudent style then championed by compatriots such as Aaron Copland and George Antheil.

In the three piano pieces — a one-movement Sonata (1927), a scherzo titled Bourgeois at Play (1930), and a three-movement sonata called Piano Percussion Music (1929) — that brash voice dominates, but is paired with a wistful vein of austere lyricism akin to that of Hindemith. The pieces are played here by Sarah Cahill, and she plays them marvelously, with brio and technical assurance, an important consideration given Blitzstein’s own first-rate pianism.

The Sonata boasts a brash eight-note main opening that recurs in the middle and at the end, contrasting with a much slower contrasting theme of pensive beauty. Blitzstein indulges his dramatic bent with frequent rests amid the clangor of the opening section, an effective bit of aural theater that concentrates a listener’s attention.

The piece has an aggressive athleticism that is further explored in Piano Percussion Music, which has a gimmicky third movement (Rondino) in which the pianist has to slap the keyboard lid, as well as open and shut it, violently and loudly. It’s a strong effect, but the music played on the keyboard — a ferocious galop with tricky rhythmic changes and sharply etched melodic fragments — is compelling enough on its own.

The slow movement, an Air with Baroque-style melodic figurations that are driven to a climactic cadence, follows a stumbling, agitated Toccata that builds to a tempestuous close and then makes its exit with a simple, hushed line. It’s an inventive, muscular piece that has more expressive range than work by other contemporary composers exploring the same realms of dissonant tonality.

Bourgeois at Play, the final piano piece on the disc, is a bubbly 3-minute work of high-spirited drama in which Prokofiev-style syncopations and dynamic shocks are leavened by short glints of sheer diatonicism that seem to be there for purposes of mockery, a sort of tonal Bronx cheer. Cahill’s exemplary pianism never flags throughout this recital, and she makes a most persuasive advocate for these fascinating pieces.

As good as she is, and as interesting as these piano pieces are, they are overshadowed by the two string quartets on the disc, played by the Del Sol Quartet. The second of those two, Serenade for String Quartet, has three movements, all marked Largo, but in practice, only the middle one really qualifies as a true slow movement.

Blitzstein clearly understood how to write for strings, and the Serenade is an intense, passionate piece that looks forward to Shostakovich in its single-mindedness and serious cast. Much of the music consists of darkly colored chordal and contrapuntal movement that speaks a simpler harmonic language than the earlier piano pieces. Crucial to Blitzstein’s aesthetic is motif, and here in the Serenade these melodic utterances weave through the music and unify it: in the first movement, it’s a six-note phrase, and in the last, an old-fashioned trill-and-suffix statement.

The second movement is perhaps the most involving, with very slow, almost primitive textures that wander aimlessly over a broken landscape before mounting to a powerful climax. Although there is a certain sameness of sound in some respects for the three movements, at less than 17 minutes total it can perhaps best be thought of as a solitary movement in three sections; certainly the last couple minutes of the final movement enter a major-key harmonic framework that speaks of release and relief.

But it is the earlier string quartet, subtitled Italian, that is the major find of this disc. This four-movement work has elements of Kitsch, but they are checked by an overall feeling of wit and mastery that makes it sound entertainingly varied rather than scattershot.

The first movement is a strong, often ruminative piece of writing in which clear motifs and wholly idiomatic string textures float above a gentle neoclassical pulse. The second is the pastiche movement, but Blitzstein sidesteps its pitfalls with the quality of his material. The ghost of the Verdi quartet is in the graceful opening melody, and operatic gestures are felt throughout, in a big waltzy outburst in the middle, mini-cadenzas from violin and cello, and a mournful, beautiful aria-like section in which the cello takes the lead.

A very brief (too brief, it seems to me) murmuring Presto follows in which the skill of Blitzstein’s string writing can again be appreciated, and that sets up the music for a closing Largo of nine minutes’ duration, almost twice as long as the next longest movement in the piece.

And it is a ravishing movement, beginning with a simple exchange of minor-key thirds, back and forth, setting up an atmosphere of grief. Voices are slowly added, and ultimately a four-note upbeat motif becomes the dominant phrase, appearing here and there as the music unfolds into a long-breathed, tragic utterance. Throughout both the quartets, the Del Sol plays wonderfully, with commitment and verve.

Blitzstein’s Italian Quartet is a very fine piece of American string-quartet writing, and the notes tell us that Boulanger thought highly of it. She was, as she was in so many other things, absolutely right: it is indeed “wholly admirable,” and should be seriously considered for inclusion in the repertory of every quartet interested in 20th-century American music.

The sound quality on this disc is quite good, even when heard through cheap computer speakers as a test. There’s a concert-hall echo on the piano pieces that might not be to everyone’s taste, but it worked fine for me. The quartets, in contrast, have a chamber ambience.

Other Minds deserves high praise and thanks for helping to fill in the picture of this much-neglected American composer. Although he concentrated his energies on the stage, Blitzstein did not have the melodic facility that would have made him a lasting success on the popular stage, unlike his friend Leonard Bernstein, who did.

That makes it doubly sad that he left off writing chamber music early, for the evidence here suggests that his particular gift was well-suited for this genre, and that he might very well have been able to write an important body of string quartet literature had he chosen to.

Nevertheless, devotees of American classical music will want to have these recordings, and doubtless want to hear at least one of the quartets in performance.

Marc Blitzstein: First Life – Rare Early Works (Other Minds/CD 1017-2) is being released Tuesday and is available at www.otherminds.org and www.amazon.com.

Music: The very last concert Franz Joseph Haydn attended in his life was in March 1808, about a year … END_OF_DOCUMENT_TOKEN_TO_BE_REPLACED

Film: Major League Baseball culminates each season with the World Series, but to find the true … END_OF_DOCUMENT_TOKEN_TO_BE_REPLACED