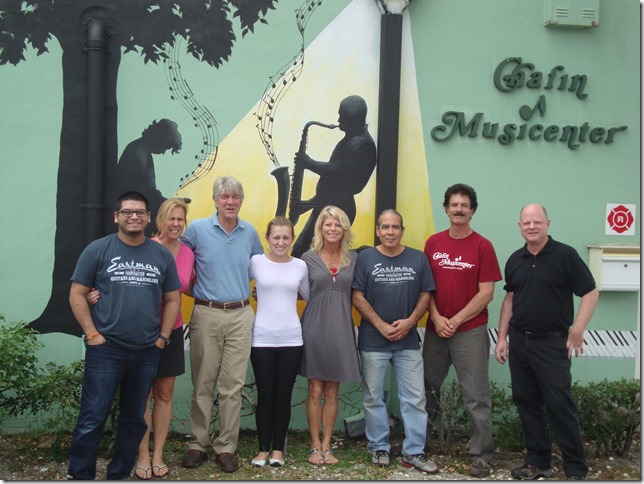 The staff at Chafin Musicenter; Sue and Jeff Chafin are second and third from left. (Photo by Bill Meredith)

Much of the first half of the 60-year life span of Chafin Musicenter (www.chafinmusic.com) in Lake Worth was spent on the 900 block of Lake Avenue, just west of U.S. 1. But when owner Paul Chafin found a larger site — a defunct feed store on North Dixie Highway — in 1985, the store was reborn.

Another major shift occurred in 2008. That’s when Chafin, a University of Miami-trained multiwind jazz instrumentalist and amiable fixture and player around South Florida, died at age 78 after a long illness. His son Jeff Chafin, now 62, and also a recognizable area performer as a guitarist and vocalist, has run the store since.

And though he was barely walking when the original site opened, Chafin and his wife, manager Sue Chafin, have more than just kept Chafin Musicenter running. On April 9, the store celebrated its 60th birthday with an all-day party that drew more than 600 people for free food, raffles, a bounce house and other kids’ activities, and live music in the adjacent fenced-in lot. Performers included longtime area jazz piano virtuoso Mark Doyle, singer/songwriter Jason Colannino and his 4 Peace Band (with Chafin on guitar), and more.

“We also had the kids in the Highland Elementary Band play,” Chafin says of the Lake Worth school. “We’ve helped them procure instruments for years.” 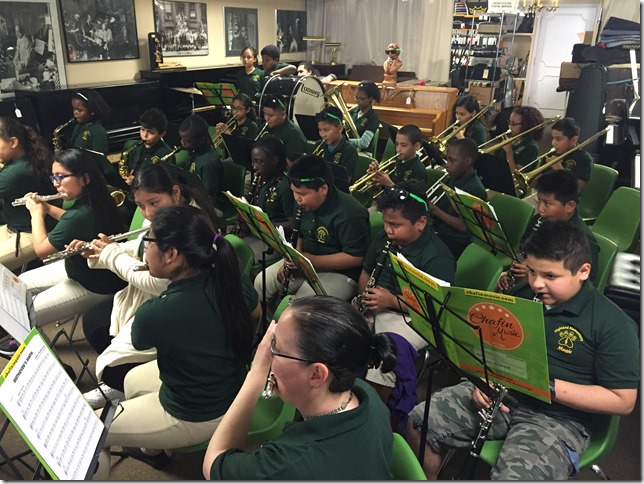 The Highland Elementary School of Lake Worth plays at the center for the anniversary last month. (Photo by Natalie Marquez)

That’s one of the things about Chafin Musicenter that hasn’t changed. The elder Chafin stressed a student-friendly atmosphere, and his son continues to stock the time-honored sheet music and songbooks that area band directors need in order to nurture the professional and amateur musicians and instructors of tomorrow. The store’s back room, with all of its paper notation, is a throwback testimonial to the area band programs it has helped since the 1950s. And much of that won’t be found in larger chain retail stores.

A side room is filled with pianos, which Chafin can often be found tuning (either there or at remote locations). And Chafin Musicenter’s tenured staff includes experienced area musicians and technicians like Bill Wallin, Jim Marino, and Danny Marquez.

“Danny’s 25 now, and he’s worked here since he was 17,” said Sue. “He’s bilingual, which has helped us get more Spanish-speaking customers. He’s been a godsend, and he’ll be a big part of our future.” 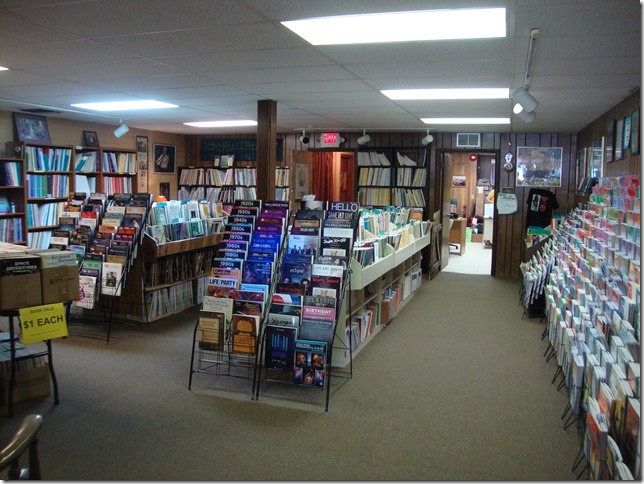 Chafin Musicenter has a room filled with sheet music for sale. (Photo by Bill Meredith)

“We’ll repair almost anything,” Chafin says. “We sell used instruments and do Internet sales. Lots of piano rentals, too. Whatever it takes to compete with the big chain stores. We have to adapt more than them. And thankfully this store has been here so long that’s it’s become a destination.”

Internet sales weren’t exactly something the late Chafin envisioned. After earning his UM degree in music education, he joined the U.S. Air Force and played in its elite jazz sextet The Crew Chiefs, which later became the heralded Airmen of Note. A throwback jazz purist to the core, Chafin traveled the world with his Armed Forces band, which entertained U.S. troops in Greenland as part of the Bob Hope Christmas Tour. His commitment to education was the underlying factor for the Paul B. Chafin Music Scholarship at Palm Beach State College, which all of the proceeds from the April 9 birthday party went toward.

“We raised about $2,000 at the birthday party toward the scholarship,” Chafin said. “And we raffled away guitars, ukuleles, drum bags, music lessons, and studio time. It was a great day, and we also sold some equipment. We’re selling more electronic stuff than back in the day; PA gear and hip keyboards. But we still go through drums and cymbals, too.”

Small studio rooms for lessons line the store’s east end, behind the room of sheet music and song books. And photos of jazz royalty, from the classic photo “A Great Day in Harlem” to Charlie Parker and the late Chafin, line the walls — pointing toward music’s past and tradition within a shop also geared toward its future and transition. 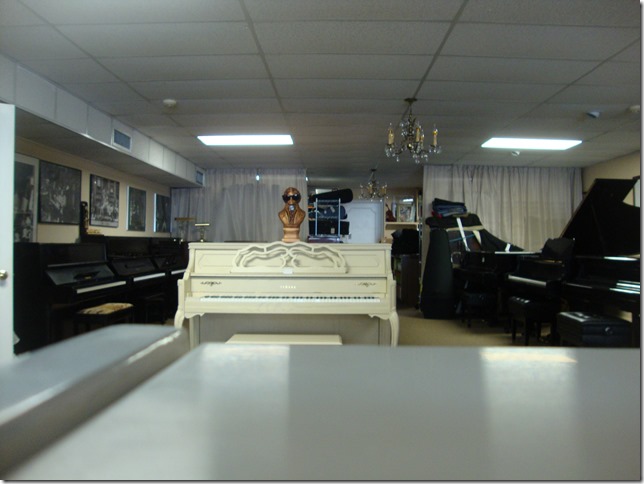 In an era where mom-and-pop retail music stores are scarce, to have one locally that’s been open since the Eisenhower administration qualifies as both a landmark and a treasure.

Somewhere, the talented, witty “Mr. P.C.,” as he was known with tongue firmly planted in cheek, is flashing an even bigger smile than he usually did.

Bill Meredith can be reached at billmrdth@gmail.com.

Film: Playwright August Wilson began his chronicle of the African-American experience throughout the … END_OF_DOCUMENT_TOKEN_TO_BE_REPLACED

Film: Just in time with the opening of movie theaters in Palm Beach County comes the season’s most … END_OF_DOCUMENT_TOKEN_TO_BE_REPLACED

Music: The very last concert Franz Joseph Haydn attended in his life was in March 1808, about a year … END_OF_DOCUMENT_TOKEN_TO_BE_REPLACED