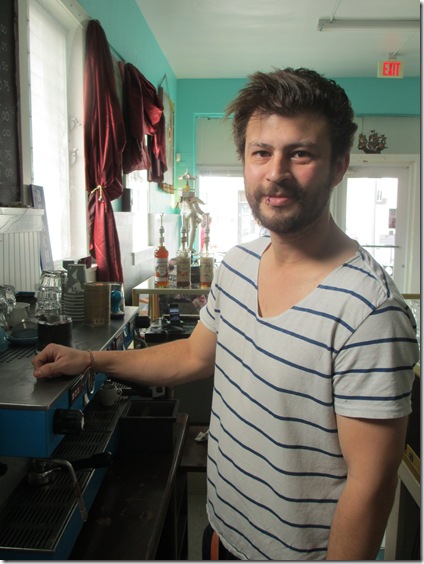 One recent morning I almost committed a crime. I was desperate for a hot cup of coffee and the flashing OPEN sign almost escaped me. The mysterious-looking logo near it didn’t help. I came very close to missing it.

What is that? I said to my companion, a fellow scooter-rider, also desperate for coffee. Only one way to find out.

That’s how we discovered Coastars, a new alternative coffee bar for people who like to pair good conversation with good coffee: whether it is cold, hot, safe or experimental. It’s the same type of place you see emerging in art communities like Wynwood in Miami, but that you want to stay away from if blue-haired people make you nervous and all you want is in-and-out service.

West Palm Beach resident Chris Palacio, 31, and his girlfriend, Liz Brach, run the shop, which has been open for a month now in Lake Worth (right next to the vinyl records store). Besides the obvious, it offers fresh-baked goodies and amusing company. Everyone is welcomed: musicians, poets, artists, bicycle riders, humanitarians and those still trying to figure out what they are.

What follows is a conversation with Coastars’s Palacio that took place while he and friends were setting up a Valentine’s Day’s solo show/event featuring an artist known as DetourButterfly.

How did the idea for the coffee shop come about?

Before this I was managing a coffee shop in Northwood called Harold’s for a couple of years. And before that, coffee was just a love of mine. When I lived in New York, I had four or five favorite coffee shops that I would visit depending on what neighborhood I was in and I liked that they each had a unique feel to them and it was a third place to hang out. You have home. You have work. And then you have this other third space where you have a good time. I want to create that here.

And we thank you for that. Is that where you are from? New York?

Yes. I grew up in Rhode Island.

When did you move down here?

About four years ago. 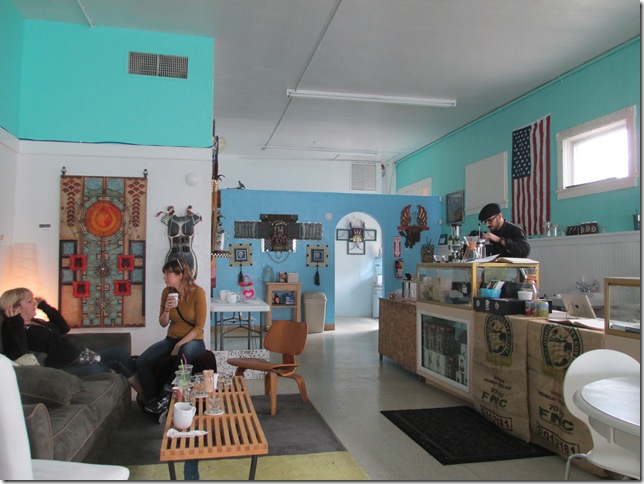 Is it fair to say then that you have always been into coffee?

Yes. Coffee, but also things that go a lot with coffee: culture, music, the arts, supporting the local community and the conversations that arise from hanging out in coffee shops.

I always like to look at the parallel between the Age of Enlightenment and the rise of coffee shops in Europe going side by side with each other. I don’t think that’s a coincidence.

So what are you hoping the people coming through these doors get from this place? Besides a cup of coffee, that is.

I want coffee to be the focus. Sometimes it’s easy to get distracted and have it become more about events, more about the lunch menus, the soups and sandwiches, more about the poetry readings or music. I mean, that all goes with it, but I don’t want the focus to steer too far from coffee.

I hope it becomes a meeting space and a hub for any ideas, anything that is being organized, anything that we want to raise awareness for. This could be sort of, you know, ground zero for those things. So I hope people use this as just home base for whatever they are doing in the area.

Maybe someone who is little-known today will become famous one day and say they used to write down their ideas on napkins in this coffee shop.

Yes. Yes. I would love that. People seem to know the hangout spots of artists and writers, and if I can get one out of here that would be great.

Was the idea always to incorporate art? Is that the vision you had?

Yes. I want to use local artists and I want to change it out every few months. Not so constant that every time you come in it’s different. But every third or fourth month have it be a different artist so that there’s always an opportunity for someone unknown to show on the walls and be up there for a while. 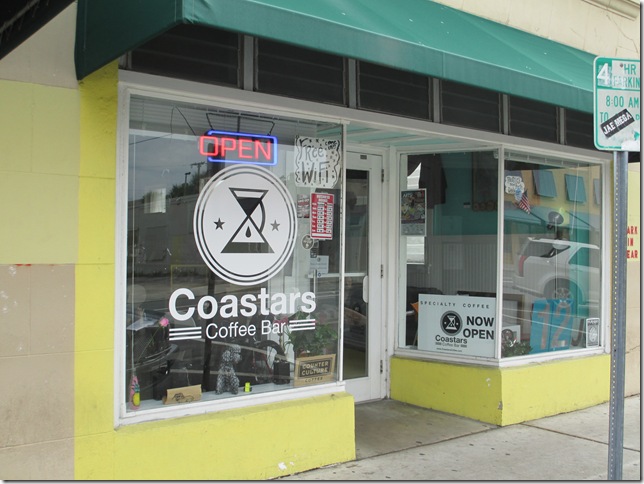 Who designed the Coastars logo?

I did. I drew it on a napkin here.

I wanted a symbolic version of a pour-over system: water on top and on the bottom, a handler. Really simple. It’s a representation of what I do, which is to make the coffee. Looks like there is a deeper sinister meaning to it but it represents coffee. That’s what I like about it. It’s something as innocent as a cup of coffee but I drew it in a way that made it seem like more.

You have been open for a month. How’s business so far?

It’s good so far. I’ve had to hire help, which is a good problem to have. There is me, my girlfriend and one more person we hired.

I see regulars, people I’ve gotten to know who are here every morning for breakfast and I’m also still seeing new faces. Those are two things that I’m happy about. If we have regulars and new faces then things are going OK.

So what’s the secret to a good cup of coffee? Temperature? Good karma?

I don’t grind the beans until the coffee is ordered. I measure out specific to the coffee and I use a scale and a timer for each cup of coffee to make sure that it’s consistent. I have kettles whose temperatures I set so that temperature is constant. I think that if you are going to make a cup of coffee you should have everything about it be done correctly. It makes a big difference.

I don’t have any hot drinks available in anything larger than a 12-ounce cup. I think that that reduces the quality of it. If you take two ounces of espresso and then you add 16 ounces of milk it’s not really a cup of coffee anymore. So I don’t want that available.

I was worried when I opened that people wouldn’t be happy about not having larger-size options, or having to wait a little longer for a cup of coffee, but so far the response has been good and people appreciate the standards I have set.

Well, in places like Portland (Ore.) or L.A., where there is a bigger coffee culture, you will see shops not have sugar or not offer milk. I don’t want to be so strict that I don’t have milk in the shop, but I do want to make sure that each cup is done right and I encourage that people try it black before adding anything.

Is that how you prefer it? 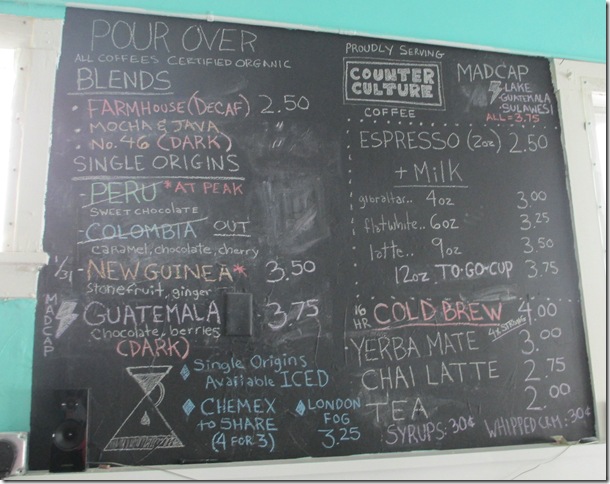 Gibraltar. It’s similar to a cortado, which is a Spanish drink; something between the macchiato and the latte. I like it because you can still taste the espresso but have a drink that you can sit with for a while and take your time.

How many cups do you have in a day?

I don’t count them.

I don’t think I have that many, but I’m always tasting different coffees from different roasters and, if I have a free moment, I like to make a cup of coffee of something that I haven’t tasted in a while just to keep it fresh in my mind.

For instance, one of the specialty items we have it’s a cold brew. I take coffee and put it in a mesh bag and a filter and have it sit in cold water for 16 hours in an air-tight container. That brews the coffee through a steeping process. The reason it takes so long is because it’s cold. But the benefit of not using hot water is that you are not releasing any of the oils that cause bitterness in that coffee when you let it get cold, so you are not getting any of the excess oils that would make the coffee bitter or acidic.

I read on your website somewhere that “great karma makes for great coffee.” What do you mean by that?

When I opened the place, I didn’t want to cut any corners when it came to the customer experience or the quality of what I was doing. I would rather have a few baked items that I sell by that afternoon than have to carry them over into the next day. I’d rather the process take a bit longer for me to grab the fresh beans and weigh and use a timer to make sure that I’m making each cup the same. And I’d rather do that so everyone gets as best a cup of coffee as I can make.

All our coffee is fair trade-certified and most are also organic. Counter Culture, our main roaster, has always had a great relationship with the farms they use and treat the farmers great as well their employees.

And when it comes to employees and the culture here, I want to apply the same thing. I treat them as equals in this company. I ask their opinion, get feedback from them. I try to treat it more like a democracy.

You mean a true democracy?

A true democracy. I make sure I’m always treating them fair. I mean, it really does pay off and it makes a difference in the customer experience if the person behind the counter is happy or not or cares about being here.

If they are just here to ring you up and they rather be somewhere else I feel that comes across to the customer and they feel that. So if the employees like being here, as much as the people who like hanging out here, I think that accomplishes the atmosphere I’m going for.

Speaking of atmosphere, everything from the furniture, to the magazines on the tables to the art in this place gives me the sense that you want people to feel comfortable, at ease. But at the same time I could see how others would not feel comfortable at all.

One of the first negative feedback I got (on opening night) at first bothered me because I thought ‘Now I have this long list of things that I’m doing wrong that I need to correct immediately,’ and then, the more I had people come in telling me that they love the place and what I’m going for, the more regulars I saw, I almost felt good there being people who didn’t like it, because that just means I’m not following the guidelines to what a coffee shop should be. I’m not painting the walls coffee brown and having matching furniture and high tables that you see in other coffee shops. They didn’t like it because it wasn’t familiar, because of the color I used or the art that I have or the amount of time that it takes for a cup of coffee. But now I’ve come to embrace that criticism.

For hours of operation visit: www.CoastarsCoffee.com; Coastars is located at 12 South J St. in Lake Worth.

Film: Playwright August Wilson began his chronicle of the African-American experience throughout the … END_OF_DOCUMENT_TOKEN_TO_BE_REPLACED

Film: Just in time with the opening of movie theaters in Palm Beach County comes the season’s most … END_OF_DOCUMENT_TOKEN_TO_BE_REPLACED

Music: The very last concert Franz Joseph Haydn attended in his life was in March 1808, about a year … END_OF_DOCUMENT_TOKEN_TO_BE_REPLACED