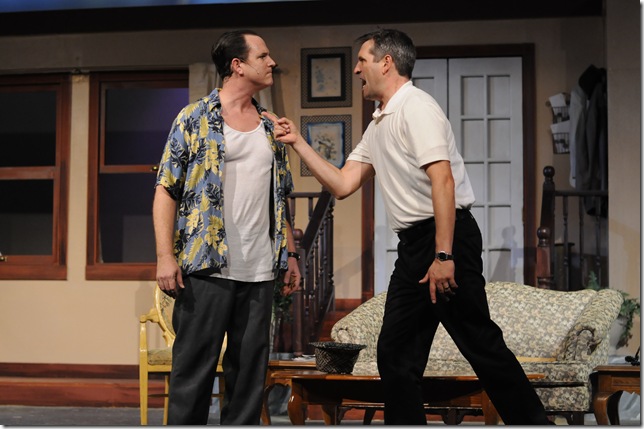 A half-century ago, playwright Neil Simon concocted slovenly Oscar Madison and paired him with neat-freak Felix Ungar to create The Odd Couple, a comic powerhouse that has endured across stage, film and television (where Felix’s last name was spelled Unger).

Perhaps the oddest thing about The Odd Couple franchise is that the original Simon play, which premiered on Broadway in 1965, is just as good now as it was then. Lake Worth Playhouse is giving credence to that theory with a rollicking Odd Couple reprise that runs through Sunday at the downtown Lake Worth venue.

Daniel Eilola, who has fronted a number of LW Playhouse productions (1940s Radio Hour, The Foreigner, One Flew over the Cuckoo’s Nest among them) is in the director’s chair this time. He gets the best from a top-notch troupe of players that provides about 120 New York minutes of laughter.

It’s no secret that The Odd Couple is the seriocomic tale of two mismatched roommates: the tidy and uptight Felix Ungar (Kevin Sario) and the sloppy, carefree Oscar Madison (Bryan Wohlust). Simon adapted the play in 1985 to feature a pair of female roommates (Florence Ungar and Olive Madison) in The Female Odd Couple. He went on to update the 1965 show in 2002 as Oscar and Felix: A New Look at the Odd Couple.

Despite all that repackaging, the original, with its band of inveterate poker players putting up with warm beer and “green” sandwiches at Oscar’s messy apartment, is surely the one to see.

Felix is supposed to be one of those card players, but as the play opens, he is nowhere to be found. His wife has thrown him out in advance of their divorce – and he has left her a “suicide telegram.” Eventually, he wanders to Oscar’s place where his buddy finally takes him in.

The Odd Couple is a galaxy of ongoing antics that capitalizes big-time on the 180-degree behavioral differences between the two friends. Despite Oscar’s problems, he seems to enjoy life. But Felix seems utterly incapable of enjoying anything, and finds purpose only in pointing out his own and other people’s mistakes. Even when he tries to do so in a gentle and constructive way, he proves annoying to those around him.

Case in point. Felix tries to eat a plate of pasta for dinner. Oscar, mocking his fastidious friend, comes by with a can of room deodorizer and sprays it into the dish. He then throws the ruined meal against the kitchen wall.

Oscar: “Now, the kitchen is full of spaghetti.” 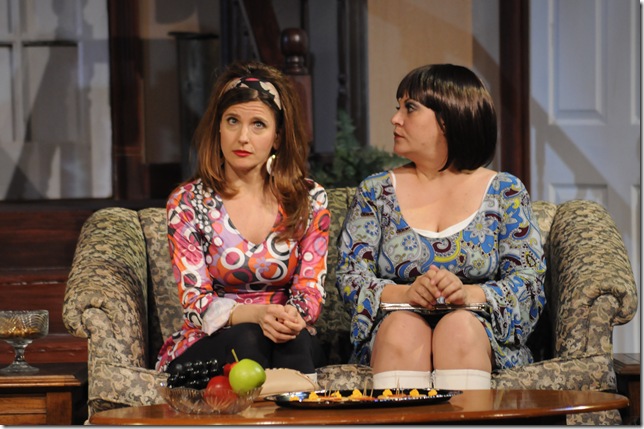 Just when it appears the show may be running out of steam, enter the Pigeon sisters — Cecily (Trish Rhodes) and Gwendolyn (Kari Budyk), Oscar and Felix’s upstairs neighbors, a pair of British sisters, one divorced, the other a widow.

Oscar invites the Pigeons to have dinner with him and Felix, hoping to ease the neat one’s fettered mind. A sexual liaison or two wouldn’t be out of the question, he surmised. But it’s Felix – fresh from dealing with a terribly overcooked roast – who strikes their fancy with his tearful tales of woe. When Oscar re-enters with drinks, all three are bawling.

Just how the play resolves itself is a bit of comic Simon genius that involves all concerned.

Lake Worth Playhouse’s production of The Odd Couple scores high in the laughter department, with the action swirling around the vortex created by Sario and Wohlust. Sario is a newcomer to South Florida, but certainly an apt performer, with a talent for droll humor and situation comedy.

Wohlust is more of a familiar face locally, having portrayed Sir Galahad in Spamalot and an over-the-top Aldolpho in The Drowsy Chaperone. He has pretty much perfected his timing and delivery, and has a Henny Youngman-like knack for delivering one-liners. 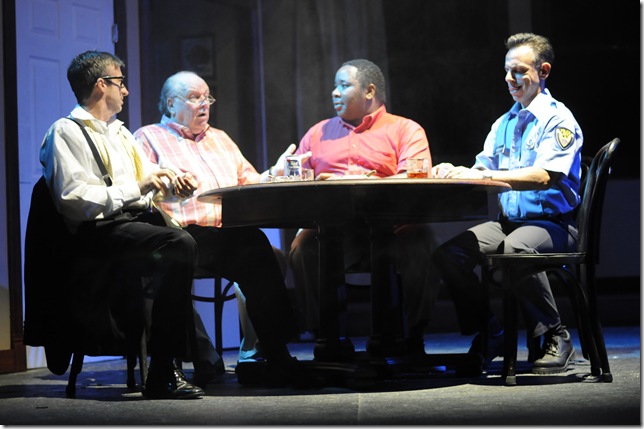 The Pigeon sisters are a perky duo who threaten to steal Act III with their humorously solicitous manners and innocent naïveté. It’s great fun watching them fawn over Felix while Oscar fumes.

Rounding out the cast is a fine flock of poker players: Miles Kammerman as Murray, the cop; Emmanuel Oliver as Speed; Howie Orlick as Vinnie and Richard Thomas as Roy. Together, they add the finishing touches to the action and bring some sense of reality to this otherwise whimsical play.

The Odd Couple is playing through Dec. 7 at the Lake Worth Playhouse, 713 Lake Ave., Lake Worth. For tickets or information, call 561-586-6410 or visit www.lakeworthplayhouse.org.

Film: Playwright August Wilson began his chronicle of the African-American experience throughout the … END_OF_DOCUMENT_TOKEN_TO_BE_REPLACED

Film: Just in time with the opening of movie theaters in Palm Beach County comes the season’s most … END_OF_DOCUMENT_TOKEN_TO_BE_REPLACED

Music: The very last concert Franz Joseph Haydn attended in his life was in March 1808, about a year … END_OF_DOCUMENT_TOKEN_TO_BE_REPLACED