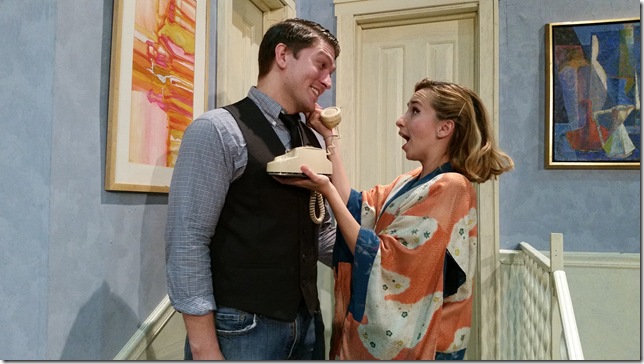 In just a few days, the Delray Beach Playhouse will close the doors on its 68th season. Summer camp kids will take over the venue for a while, then the theater opens again for its 69th season of live mainstage performances in October.

There’s still time to catch the final show of the season. Barefoot in the Park, an endearing early-career effort from prolific playwright Neil Simon and a production well worth seeing, ends the 2014-2015 schedule with performances today, Saturday and Sunday.

The romantic comedy about a pair of newlyweds launching their lives together in a tiny, New York apartment is based on actual life experiences of Simon and his first wife, Joan. Funny in a quirky way, the show contains wacky lines and situations that Simon swears actually took place during his first marriage. What really stands out is the cast’s ability to dust off a 52-year-old script and make it live again, despite dated lines and references to Princess telephones, Polaroid cameras and New York apartment rentals going for $72 a month.

Barefoot in the Park is still entertaining after all these years. The play — first directed on Broadway by Mike Nichols — premiered in 1963 and starred Robert Redford, Elizabeth Ashley, Mildred Natwick and Kurt Kasznar. The play remains both Simon’s longest-running hit and the 10th longest-playing, non-musical show in Broadway history.

While the Delray Playhouse performers have the benefit of a show with exceptional lineage, they still have to come up with the requisite talent to make it work. And, to a person, they do, as does Randolph DelLago in the director’s chair.

Simon’s show tells the tale of newlyweds Paul (Joshua Matheney) and Corie (Krystal Millie Valdes) as they move into a tiny apartment that Corie selected without showing her hubby. To Paul’s dismay, the only entry is by way of a five-story stairway — and there’s no elevator. It’s a tiring trip for nearly all the players — including two delivery men and a telephone installer — each of whom conveys to the audience his or her mock shortness of breath using silly hyperbole.

Corie and Paul’s six-day-old marriage isn’t off to a stellar start. While Paul tries to launch his law career by simply getting a good night’s sleep in the freezing unit with a hole in the skylight, Corie tries to turn their minuscule dwelling into a real home. She gushes over the arrival of a telephone and giggles that Paul can take showers when he complaints about their tub-less bathroom.

Quickly, Corie’s mother (Phyllis Spear) arrives, huffing and puffing up the stairs. Soon after, we meet the mysterious man who lives upstairs, Victor Velasco (Daniel Steinlauf). To compound things even further, Corie invites her mother and Mr. Velasco to dinner just one day after their furniture arrives. The evening becomes an awkward clash of cultures as Corie’s suburban New Jersey mom is swept away by Mr. Velasco to an Albanian restaurant on Staten Island.

The Delray Playhouse show sidesteps the obsolescence that often plagues productions of this half-century-old show. The players manage to keep the dialogue crisp, fresh and even silly at times. It all works.

The players do, too. Valdes is a perky fireball last seen as one of the Kit Kat Klub girls in Cabaret at the Broward Stage Door Theatre. She’s a spitfire of an actress with an ability to grasp the script and handle physical comedy.

As Paul, Matheney has the look of a young Redford along with the savvy to get his head into the role. Corie’s mom, Phyllis Spear, is a fine, one-of-a-kind character actress who has displayed her charm and talent at various locations. She starred in The Last Romance at both Delray Playhouse and Broward Stage and morphed into Phyllis Gold in Twilight of the Golds at Broward.

Steinlauf is delightfully engaging as the enigmatic Mr. Velasco, a role that’s a handful for any actor. He has a portfolio of acting credits, and when not on stage, occupies the world in the role of an accountant.

Rounding out the cast are Steven Fireman as the sympathetic and gentle phone repairman; Marc Streeter and Ernest G. Simon as two deliverymen. Their scant time on stage gives little chance for either to display their acting talents.

Film: Just in time with the opening of movie theaters in Palm Beach County comes the season’s most … END_OF_DOCUMENT_TOKEN_TO_BE_REPLACED

Music: The very last concert Franz Joseph Haydn attended in his life was in March 1808, about a year … END_OF_DOCUMENT_TOKEN_TO_BE_REPLACED