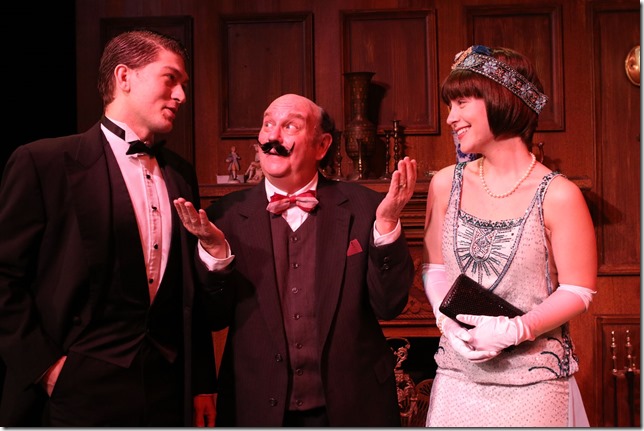 Delray Beach Playhouse brings its 2015-16 season to an end with the first production that murder mystery maven Agatha Christie wrote for the stage. And it’s an excellent fit for both.

The Playhouse engages 13 fine actors to perform Christie’s deadly drama, Black Coffee. The piece that launched the successful author’s vocation as a playwright — and introduced theater-goers to master Belgian gumshoe Hercule Poirot — is being staged through June 5.

Not surprisingly, the lead role in this clever Christie concoction is played by an 18-year veteran of the Delray Playhouse stage, Mark Hetelson. A bevy of talented actors handles much of the action as Hetelson portrays Poirot in true detective fashion, often melting into the background to survey the overall scene.

Penned in 1929 and staged for the first time in London in 1930, Black Coffee is set in the elegant home of prominent British physicist Sir Claud Amory (Jim McConville). The set designed by scenic artist Cindi Taylor and her workers is as elegant a replica.

The play deals with the murder of the famed scientist and the theft of his secret formula essential to the creation of an atomic bomb. Director Randolph DelLago tells us this play has always held a special fascination for Christie fans because it was written in 1929, almost two decades before the rest of the world learned about atomic energy and creation of the A-bomb.

Black Coffee is an amalgam of intriguing characters and dastardly deeds. Even as the production opens, the audience learns that Sir Claud’s formula has already been stolen. But the many family members and other visitors are largely unaware of the heist.

Sir Claud finally announces to all gathered that his formula has been pilfered, and he suspects the culprit is within the home. So, he offers a deal: after one minute, the lights will go off. Whoever stole the envelope containing the formula should put it on the table and no questions will be asked.

As the lights go off, a sound of something striking against metal is heard, along with the noise of fabric tearing. When the lights come back on, the envelope has been returned to the table.

But wait. There’s more. The envelope is empty — and Sir Claud is dead. He was sipping his coffee just as the room darkened, and he had time simply to utter, “This coffee is bitter.” Apparently Claud, like the coffee, was good only to the last drop. 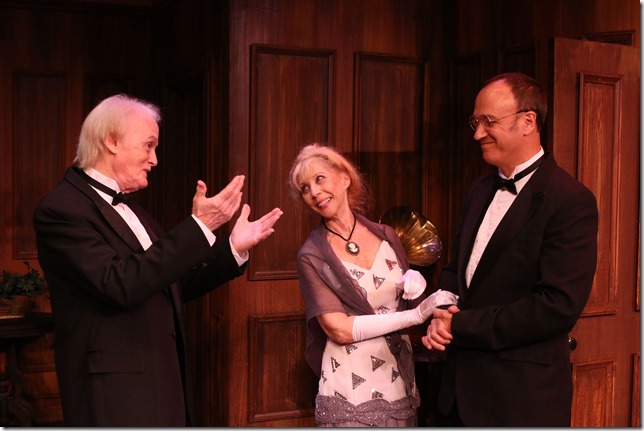 Enter Poirot and sidekick Arthur Hastings (Neil Evangelista), who walk into a virtual hornet’s nest of suspects. The detective uses his best investigative senses to determine the culprit. Was it Sir Claud’s son, Richard (Joshua Matheney), who is desperate for money? His daughter-in-law, Lucia (Brianna Frank), the daughter of a notorious spy? Dr. Carelli (Jay Underkofler), a physician with a vast knowledge of poisons? Or is it the butler, Tredwell (Charles R. Bolick)?

As Poirot probes more deeply, he senses all are intent on hiding something. He gives careful scrutiny to Caroline Amory (Elizabeth Levin-Smith), the deceased’s sister, and his niece, Barbara (Macie Hall). He even ponders whether Sir Claud’s secretary, Edward Raynor (Jim Tyminski), could be the purveyor of nastiness.

Black Coffee is a puzzling play that will keep you wide awake. Hetelson, who has performed in productions by playwrights with such surnames as Beckett, Pinter, Simon and Shakespeare, does exceptionally well with Christie’s work.

So do the many other players. Matheney, who starred in last year’s Barefoot in the Park at Delray, seems the perfect, loving son to Sir Claud. Brianna Frank’s character of Lucia, with her ties to a spy/mother, is wonderfully cast as a person not above suspicion.

McConville’s portrayal of Sir Claud is right on the money, though it doesn’t last very long. As Tredwell, Bolick seems too obvious to be a killer/thief — or is he? Levin-Smith and Hall portray quirky family members — people to be watched, perhaps.

Evangelista provides a nice second to Poirot as his comrade. He does a fine job in the role that’s played very much like Watson to Sherlock Holmes. Tyminski does a particularly shady job as Sir Claud’s secretary, but that could just be his stage prowess.

Film: Playwright August Wilson began his chronicle of the African-American experience throughout the … END_OF_DOCUMENT_TOKEN_TO_BE_REPLACED

Film: Just in time with the opening of movie theaters in Palm Beach County comes the season’s most … END_OF_DOCUMENT_TOKEN_TO_BE_REPLACED

Music: The very last concert Franz Joseph Haydn attended in his life was in March 1808, about a year … END_OF_DOCUMENT_TOKEN_TO_BE_REPLACED