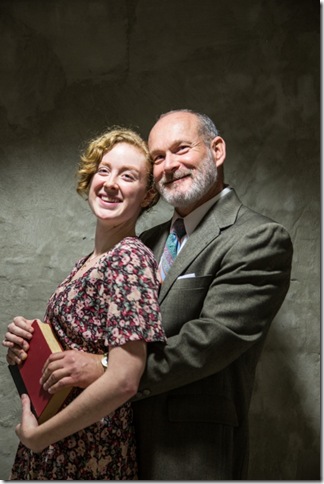 Student dramatists at Florida Atlantic University are always finding plays that feature such bizarre themes and characters that they’re unlikely to end up on the stages of mainstream theatrical venues.

So it is with Holy Ghosts, a production centering on mankind’s struggle to balance the need for religious tolerance with our strong inclination to reject faiths whose beliefs and values are markedly different from our own.

Holy Ghosts is a taut and telling drama of a fact-based religious subculture rooted in Christianity, but which strays far from the behavioral norm.

This 1971 play by Romulus Linney focuses on Nancy Shedman (Kimberlee Connor), who runs from the drunken and brutal attentions of her husband Coleman (Jordon Armstrong) and moves in with a band of Pentecostal snake-handlers. She has fallen in love with its leader, Rev. Obediah Buckhorn Sr. (Doug Wetzel) and it appears she’ll become his sixth wife — though she finds that thought cringe-worthy.

With a milquetoast lawyer in tow, Coleman crashes the church and bellows at his wife and congregants, demanding a divorce and the return of his furniture and pickup truck she has stolen. What he doesn’t expect is a full court press by church members who spend the next couple of hours catharting their own troubles and occasionally kicking and slapping Coleman around physically and spiritually. From such grist emerges a riveting production by a band of excellent actors.

The author’s name may not mean much to some, but Linney wrote 85 plays, 20 short stories, four opera librettos and three novels. The writer, who died in 2011, was also the father of noted actress Laura Linney.

Throughout Act I, a crowd of congregants gathers at the one-room church where some odd wooden boxes are piled by the window. At one point, Coleman sits on them and angrily bangs his booted foot on them. Hissing pours out. He has awakened the snakes, and that means trouble.

The author, having grown up in backwoods regions, portrays the snake handlers as a respectable, caring support group for the confused, damaged and rejected. (Nancy and Coleman are all three).

The play takes a potentially boring turn when the congregants begin telling their stories, but the tales are so weird, they demand rapt attention from the audience. 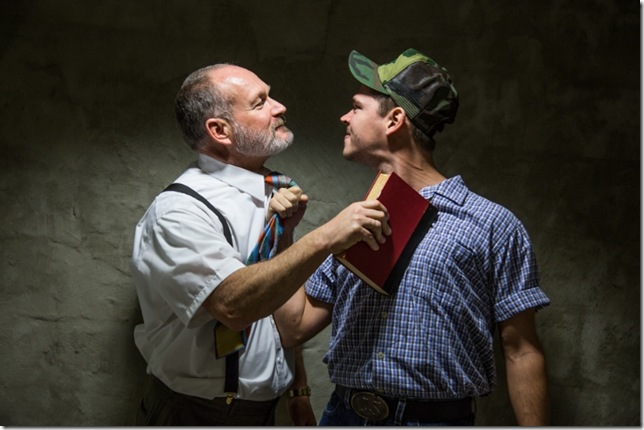 There’s Carl (Jack Kelly), who “sees” his dead bird-dog; Bonnie (Brianna Handy), whose amorous ways with men have driven her from other churches to the snake-handlers; two homosexual roughnecks Orrin Hart and Howard Rudd (Joey De La Rua and Bradley Wells, respectively); a clueless young couple who knows nothing about caring for their infant child, Muriel and Billy Boggs (Nicole Pelini and Chris Cooper); Mrs. Wall (Madison Spear), a bitter Sunday school teacher forced out of her former church; an old man dying of cancer (Manny Zaldivar) and others, including one who says he saw the church roof open to the Holy Spirit.

When the snakes come out, the action intensifies. Actors flail, dance and speak in tongues. Hallelujah music abounds and Bibles are thumped. Coleman, now reduced to a shell of his former fury by the torrent of opposition, lies crying on a bench. Resolution, even redemption, seems at hand.

The Holy Ghosts cast is an excellent ensemble, with evenly matched talents directed ably by Jean-Louis Baldet. There really is no star, and even Connor and Armstrong willingly step back so others can take their turn in the spotlight.

Ross Frawley, as attorney Rogers Canfield, adds a necessary touch of comic relief, but, overall, there’s little to chuckle about.

The players offer many memorable moments. Kelly, the actor who hallucinates his dead dog, tells of the night his pet was poisoned to death with such heart that some in the audience may weep. McIntosh, a burly character, cuts the blustering Coleman down in a particularly moving scene.

Holy Ghosts is playing Friday and Saturday at 7 p.m.; Saturday and Sunday at 2 p.m. in Studio One on FAU’s Boca Raton campus. General admission tickets are $20; students, faculty, staff, alumni and children under age 12 may purchase tickets for $12 and group prices are available. Call 1-800-564-9539 or visit www.fauevents.com.

Film: Playwright August Wilson began his chronicle of the African-American experience throughout the … END_OF_DOCUMENT_TOKEN_TO_BE_REPLACED

Film: Just in time with the opening of movie theaters in Palm Beach County comes the season’s most … END_OF_DOCUMENT_TOKEN_TO_BE_REPLACED

Music: The very last concert Franz Joseph Haydn attended in his life was in March 1808, about a year … END_OF_DOCUMENT_TOKEN_TO_BE_REPLACED