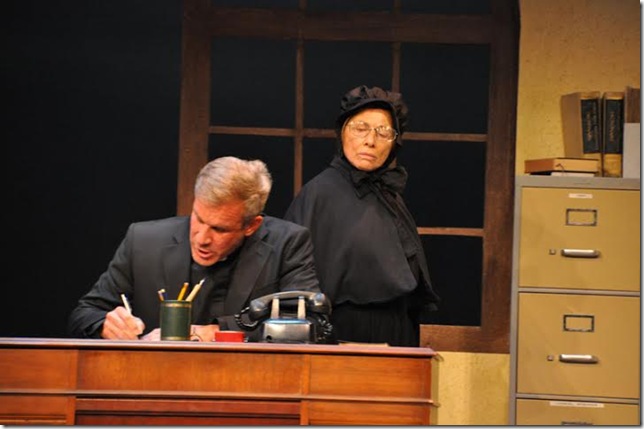 Delray Beach Playhouse wraps up its 67th season with a presentation of Doubt, the taut, bare-knuckle drama that rivets audience members for the duration of its 90-minute, one-act story ripped from contemporary headlines. It runs through Sunday.

Penned by John Patrick Shanley, Doubt examines the tense interplay between a tough, iron-willed nun who strongly suspects a popular, progressive priest at the fictional St. Nicholas Church School in the Bronx of sexually abusing one of the eighth-graders. The fact that the alleged victim, Donald Muller, is also the school’s only black child makes the situation more brazen.

The play, written in 2004, won a Pulitzer Prize for Drama and a Tony for Best Play in 2005 – and soon after became a film starring Meryl Streep and Philip Seymour Hoffman in the lead roles. It is set in 1964, long before sex abuse accusations against priests became public and ignited a scandal in the Catholic church.

Four talented actors advance the action in Doubt. Plaudits are particularly in order for Tom Gregory as Father Flynn, the priest whose willingness to offer a helping hand to kids in a working-class Bronx neighborhood parochial school is commendable — or is it? Jerri Iaia more than holds her own as Sister Aloysius, the hard-bitten school principal whose growing ire for the priest explodes in an acidic confrontation that climaxes the growing acrimony of the two religious leaders.

Rounding out the cast are Stephanie Dukova as Sister James, a religious novice and teacher at the school who is sucked into the rancor between the priest and principal that is swirling just above her in the church hierarchy, and Evelyn Russell, as the alleged victim’s mother.

This play is more about doubt than either abuse, misuse of authority or inability to get along. The nun-priest debacle eventually resolves itself, but doubt is all around and never goes away, the play says.

The show opens with Father Flynn, a trim, middle-age man resembling actor Richard Gere, delivering a sermon about doubt. It’s doubtful that even he, at this point, knows of the upcoming fight with the administrator as she gives vent to her suspicious — some may say overly suspicious — mind. 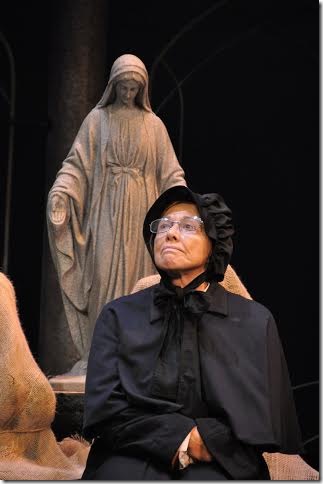 Unfortunately for her, Sister Aloysius gathers no allies in her quest to rid St. Nicholas of the priest’s presence. Her irascible nature and general distrust of other teachers, students and the public put her at odds with the world. Meanwhile, Father Flynn is seen as the good guy, for example, showing up in sweats to teach students basketball skills.

Sister James bends to the commands of the elder nun, but clearly takes Father Flynn’s side when she, Aloysius and the priest duke it out verbally in the principal’s office where she reveals her sinister suspicions.

While Iaia takes the lead bow at show’s end, it’s clear that she and Gregory are on equal footing in talent and stage presence. He portrays Father Flynn as a sympathetic soul, ambitious, quick to fight back when cornered, but with a vulnerability that is appealing.

Iaia seethes as Sister Aloysius, a woman who finds fault with just about everything; a wundernun who wants the tide of life always to flow her way. Both actors bring extensive experience to the stage, with Iaia drawing on her education at The Convent of the Sacred Heart in Philadelphia.

Dukova is wonderfully soft-voiced and meek as Sister James, a bit like Maria in The Sound of Music. The actress brings talents gained on stages in the United States and Europe to Delray Beach.

Russell – remembered for her excellent starring role in last year’s musical, Ethel Waters: His Eye is on the Sparrow – gives Mrs. Muller the quality of great insight, showing clearly how a mother’s love is perhaps life’s most perfect guide.

DBP’s artistic chief, Randolph DelLago, again sits in the director’s chair. He fine-tunes the acting on a two-tableau stage created by scenic designer Cindi Taylor. One is the principal’s forbidding office, the other the school courtyard with a statue of the Blessed Mother overlooking fallen leaves and bare trees that show a cold, harsh world.

Film: Playwright August Wilson began his chronicle of the African-American experience throughout the … END_OF_DOCUMENT_TOKEN_TO_BE_REPLACED

Film: Just in time with the opening of movie theaters in Palm Beach County comes the season’s most … END_OF_DOCUMENT_TOKEN_TO_BE_REPLACED

Music: The very last concert Franz Joseph Haydn attended in his life was in March 1808, about a year … END_OF_DOCUMENT_TOKEN_TO_BE_REPLACED